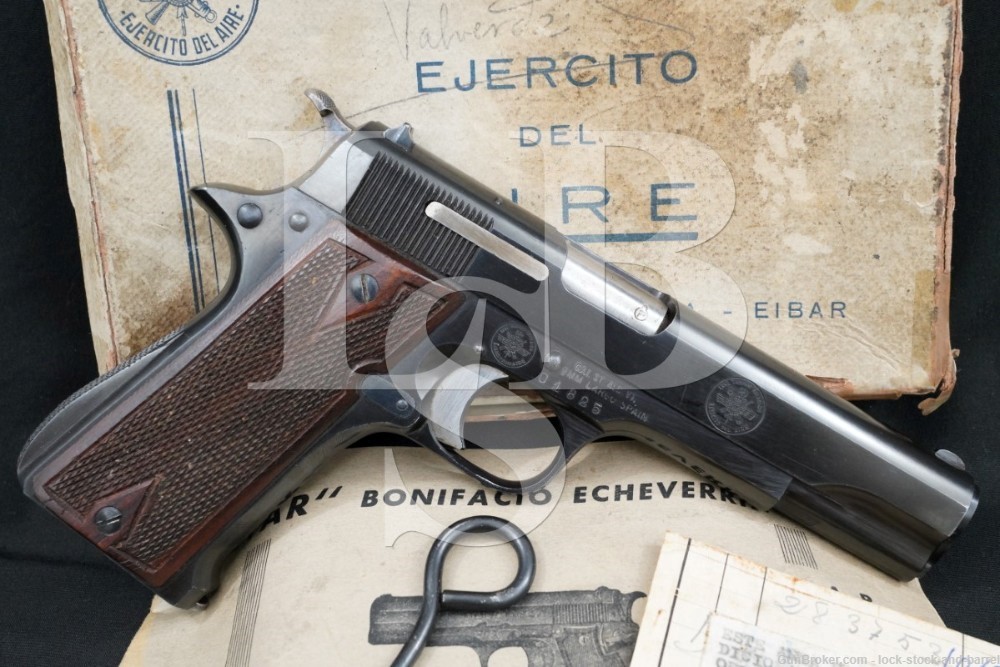 Stock Configuration and Condition: The grips are replacement two-piece checkered wood panels, each with smooth diamonds. The checkering in both panels has a few spots where it is lightly worn or compressed. Smooth areas have intermittent minor nicks and compressions. Ther checkering is otherwise well-defined. There are no chips or cracks. Overall, the grips rate in Very Good condition, as not original to the gun.

Bore Condition: The bore is still rather bright with well-defined rifling. There is stubborn fouling and light erosion on the lands.

Overall Condition: This pistol retains about 92% of its metal finish. The slide has scattered minor nicks and minor thinning on some edges. The guard has minor thinning on some edges. The checkering on the mainspring housing has a bit of minor surface oxidation. The grip screws are all lightly tool marked with usable slots. The markings are clear. Overall, this pistol rates in Fine condition.

Mechanics: The action functions correctly. This model has a manual safety and a quarter-cock hammer notch. The slide has some play to the frame. We did not fire this handgun. As with all used firearms, a thorough cleaning may be necessary to meet your maintenance standards.

Box, Paperwork, and Accessories: This pistol includes its original Spanish Air Force issue box, the original manual, one (1) 8-round magazine, and a cleaning rod.

Our Assessment: From star-firearms.com: “Information on Star as a company has traditionally been hard to get because they were an old-school European company. They tend to only want to communicate through the distributor network, and because in many countries their distributors consider them a second-tier brand, so did nothing to promote their story. But the biggest problem… now is that they no longer exist.” Too bad. Pistols made in Spain were attractive to buyers for the reputation of Spanish steel, which was known to “hold an edge” as it were, and Star made firearms for three quarters of a century, but ultimately shuttered in 1997 in a quagmire of financial problems, being outpaced by the market, and workforce attrition. The Modelo “A” on offer here is a cousin to the M1911A1, was produced in 1946 and was issued to the Spanish Air Force, or Arma Tropas Aviacion. Rare to pistols of this age are the included original Spanish Air Force box and product manual. The pistol has very little wear, the bore and mechanics are great. This is truly a lovely bit of militaria. Good luck and happy bidding!