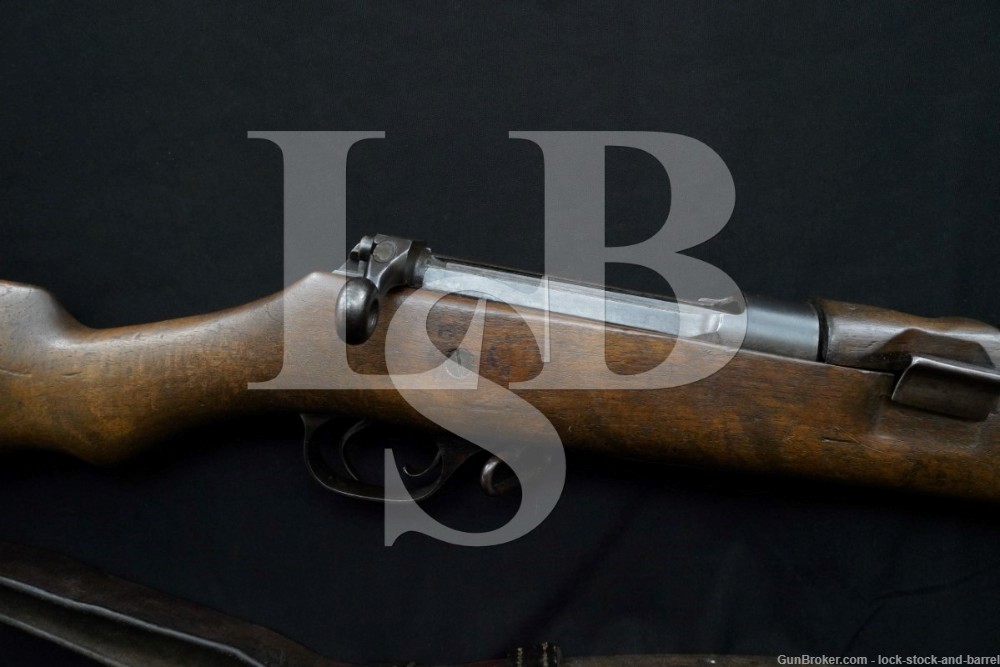 Markings: There is no visible import mark. The left side of the receiver is marked “ROSS RIFLE CO. QUEBEC. CANADA. 1905 / PATENTED”. The rear of the bolt handle is marked with “crossed flags” and a “crown”. The bottom of the grip is marked “flaming bomb / U.S. / 14993”. The right side of the butt is marked with several “crossed out” markings and with a faded Canadian roundel that contains “crown / QUEBEC”. It is also marked “3 star / II.” and “883/190 BE”. There are a few other small markings on the rifle.
The bottom of the sling is marked with a Canadian Acceptance stamp “arrow inside a C” and with a “1”.

Sights / Optics: The front sight is a bladed post set atop a raised base and under a protective hood. The rear sight is a “U” notched blade when down. When flipped up it becomes a sight ladder that uses a sliding “U” notched blade that also contains an aperture. The ladder is marked from “1 -22” on the right and from “0-320” in increments of 20 on the left.

Stock Configuration & Condition: The hardwood stock has a pistol grip, 2 through bolts, nosecap with bayonet lug, stacking loop, barrel band, sling loop under the butt and a metal buttplate with sliding door for storage. The buttplate shows scrapes, discoloration from oxidation, and light surface erosion and scratches. The stock hardware shows scrapes and surface erosion. The stock shows numerous scrapes, scratches, and compression marks. Several have damaged small portions of the surface wood. The most prominent marks are under the left side of the receiver. The LOP measures 13 ¾ inches from the front of the trigger to the back of the buttplate. The stock rates in about Good to Very Good overall condition.

Bore Condition: The bore is grey and the rifling is deep. There is erosion in the bore; more prominent near the muzzle.

Overall Condition: This rifle has retains about 15% of its metal finish. The receiver has been treated with cold blue. Scratches and surface erosion show through the cold blue finish. The metal shows scrapes, small scratches, discoloration from oxidation, and areas of light surface erosion. The screw heads show heavy use and oxidation. The markings are well defined. One of the receiver markings has faded slightly. Overall, this rifle rates in about Good to Very Good condition.

Mechanics: The action functions correctly. We have not fired this rifle. As with all previously owned firearms, a thorough cleaning may be necessary to meet your maintenance standards.
The bolt release plunger is located at the left rear of the receiver. The safety is located on the rear of the bolt handle. It slides to the left for the “SAFE” position. The hook inside the trigger guard is a magazine cutoff. The magazine assist lever is at the right front of the receiver. When it is pushed down the magazine follower drops.

Box, Paperwork & Accessories: The rifle comes with a Canadian marked leather sling. It shows scrapes, surface creasing, and discoloration. Overall it is in about Very Good condition.

Our Assessment: This Canadian Ross Rifle Mk II (Model 1905) is in good shape for being over 100 years old. It has rare “U.S.” markings on the stock. The distinctive straight pull action should make for some fast shooting and its markings make it a candidate for a Military collection.
In 1917, the U.S. Government purchased 20,000 Ross rifles and bayonets from Canada. These were intended for use in troop training due to the shortage of rifles and bayonets during the First World War. They were marked with “U.S.” and the Ordnance Dept. “flaming bomb” acceptance mark.