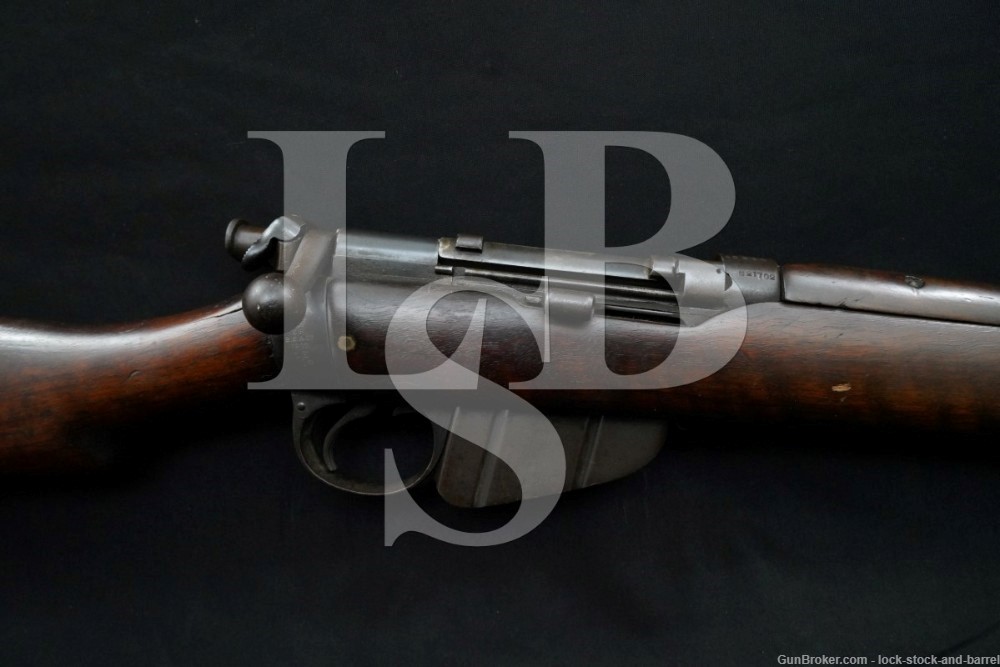 Markings: There is no visible import mark. The left side of the stock collar is marked “crown / E.R. / ENFIELD / 1902. / L.E. / I*”. The right front of the receiver is marked with the serial number. The front of the receiver is also stamped with an Australian ownership mark “D broad arrow D”, “2 / 10214”, with a faded stamping, and with a British sold out of service mark “touching broad arrows”. The top of the barrel shank is marked “LITHGOW”. The left side of the receiver and barrel shank are each marked with “crown / crossed” flags proofs. The rear of the bolt handle is marked with a number that does not match the serial number and “crossed flags”. The front volley sight plate is marked “LE II”. Several of the metal parts are marked with small stampings that include “crowns” and “broad arrows”.

Sights / Optics: The front sight is a bladed post set atop a small ramped base. The rear sight is a “V” notched blade attached to an escalator assembly. The left side of the sight base is marked “200 300 400 500” for use with the escalator. It flips up to become a sight ladder that uses a sliding “V” notched blade. The ladder is marked from “6-18”.
The front volley sight is a rotating dial with a point at one end and the front volley sight at the other. The sight is rotated to the desired distance. It is marked (faded) “1600” and from “17 – 28”. The rear volley sight is missing. It is normally a tall flip up aperture attached to the safety.
The left side of the receiver is drilled & tapped with 2 holes that can be used to secure an optic.

Stock Configuration & Condition: The wood stock has a straight grip with finger groove, nose cap with bayonet lug, a brass buttplate with a hinged door for storage, scallop for the front volley sight base, and a cutout for the missing rear volley sight aperture. The buttplate shows several scrapes & scratches as well as discoloration from oxidation. The nosecap shows scrapes & a brown patina. The bottom of the butt shows an unfilled sling stud hole. The grip shows filled & repaired cracks at the stock collar. The left side of the butt shows paint residue. The left rear of the handguard is missing a section of edge wood. The wood shows several scrapes, scratches, and compression marks. Some have damaged small portions of the surface wood. Most of these marks have been finished or oiled over. The LOP measures 13 ¼ inches from the front of the trigger to the back of the buttplate. The stock rates in about Very Good overall condition as refurbished.

Bore Condition: The lands are grey and the grooves are dark. The rifling is deep; shallow at the muzzle. There is erosion in the bore; more prominent in the grooves.

Overall Condition: This rifle retains about 20% of its original metal finish. The metal shows scrapes, discoloration from oxidation, and surface erosion. The screw heads show use and oxidation. The markings are deep. Overall, this rifle rates in about Good condition.

Mechanics: There is no Dust Cover on the bolt. This does not affect the rifle’s action. The magazine spring is damaged. It does not place upward pressure on the magazine follower. A new magazine spring is needed for the magazine to function.The left side of the receiver shows 2 empty screw holes that were previously used for the rear volley sight. These missing screws do not affect the rifle’s action.
The action functions otherwise. We have not fired this rifle. As with all previously owned firearms, a thorough cleaning may be necessary to meet your maintenance standards.

Our Assessment: This Lee-Enfield MkI was made back in 1902 by the  British Small Arms Company (B.S.A. Co.) of England. It eventually served for the Australian Military and is stamped with an Australian property mark as well as “LITHGOW”. These rifles are scarce as you don’t find many Enfields marked “L.E. / I”. This one has lost its dust cover and needs a new magazine spring, but those items can be replaced. This 119 year old military rifle will add to an Enfield collection and can still put lots of .303 down range.