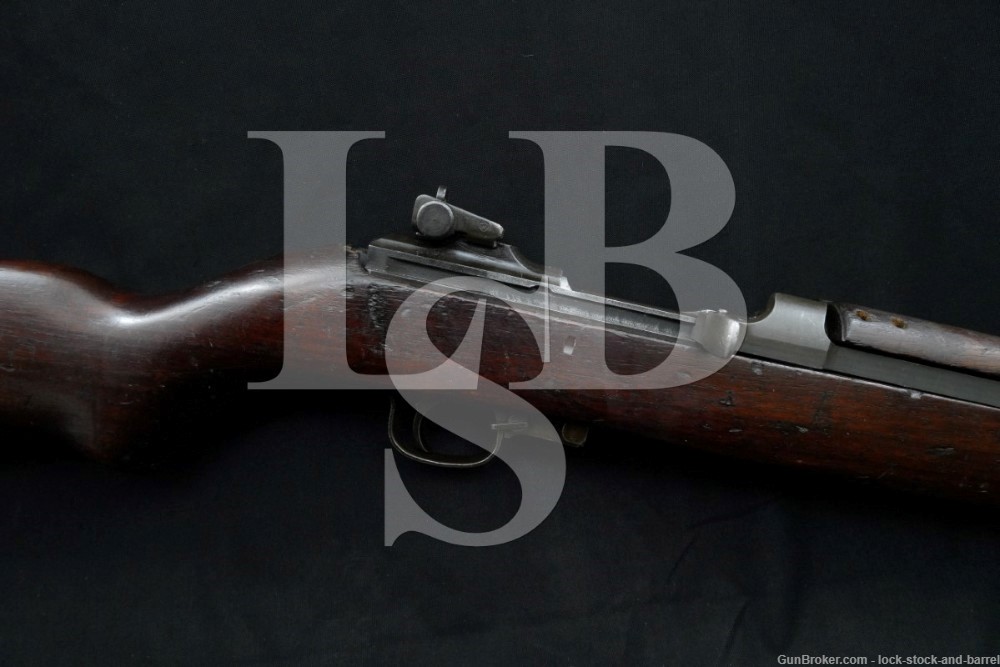 Stock Configuration & Condition: The stock is missing its recoil plate, barrel band retaining spring, and stock escutcheon (nut to the rear of the grip). The action will not lock properly into place without these items. It is also missing its buttplate.
The stock shows numerous scrapes, scratches, and compression marks. several have damaged or removed small portions of the surface wood. The LOP measures 13 ¼ inches from the front of the trigger to the back of the buttplate. The stock rates in about Fair to Good condition in its current incomplete state.

Overall Condition: This rifle retains about 90% of its metal finish as refinished. The barrel has areas of surface erosion showing through the new finish. The receiver and barrel show a few areas of thinning under the wood. The metal shows scrapes, scratches and areas of discoloration from oxidation. The right side of the receiver and bolt show thinning from cycling the action. Most of the markings are deep. The markings on the rear of the receiver are slightly faded. Overall, this rifle rates in about Good condition as refinished.

Mechanics: The stock is missing its recoil plate, barrel band retaining spring, and stock escutcheon (nut to the rear of the grip). The action will not lock properly into place without these items.
The action functions otherwise. We did not fire this rifle. As with all used firearms, a thorough cleaning may be necessary to meet your maintenance requirements.

Our Assessment: National Postal Meter (NPM) was one of several contractors who tooled up during WWII to produce M1 Carbines in support of the war effort. NPM rushed into the war effort as did other companies with no firearms background. At the time of their first contract NPM had no tools, no employees, and no location for building carbines. National Postal Meter’s test fire range was built by raising the floor of the carbine manufacturing plant three feet above the building’s concrete floor and literally shooting under the feet of the production line. Despite these issues NPM was able to produce about 6.8% of the total number of WWII M1 Carbines.

This National Postal Meter M1 Carbine was built back in 1943. After WWII it served in a U.S. friendly country and was eventually imported back into the U.S. for sales to the civilian market. The barrel is marked accordingly. This NPM M1 Carbine is missing a few stock parts which will be needed before you can shoot the rifle. These parts can be found on-line or at a gun show. Good luck.