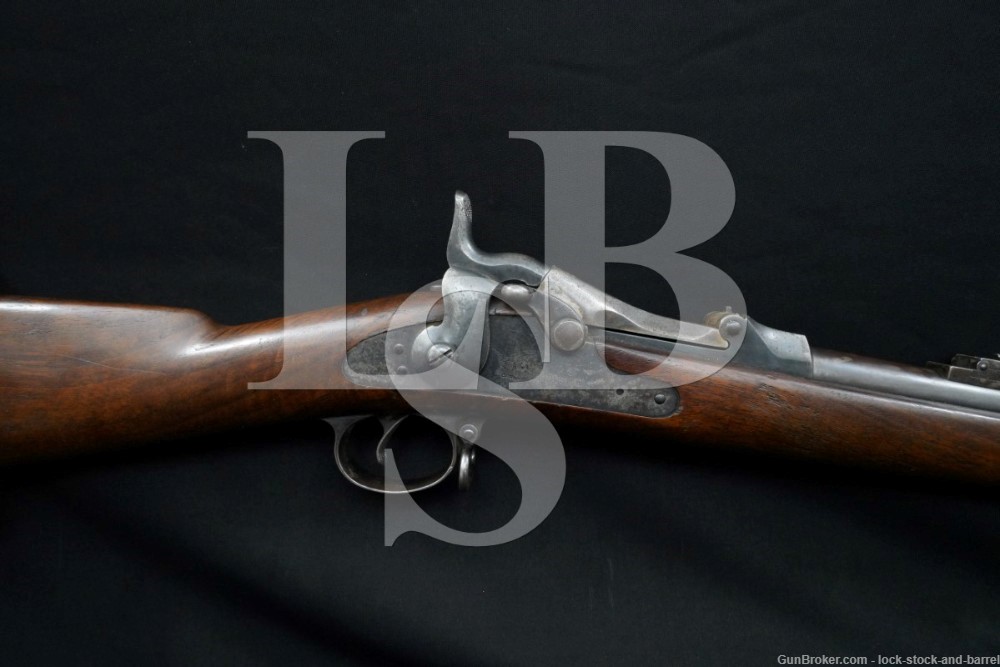 Sights/Optics: The front sight is a blade pinned to a rectangular base set on the barrel. The rear sight is an 1884 Buffington sight.

Stock Configuration and Condition: The stock is a one-piece smooth wood with rod bayonet stud, two barrel bands, straight grip, straight comb, and a sheet steel buttplate with swing open butt compartment. There is a sling swivel at the front of the guard and a sling swivel and stacking swivel on the bottom of the forward barrel band. Light nick and dings can be seen throughout with the heaviest concentration being around the grip and on the comb. The LOP measures 13 1/4” from the front of the trigger to the back of the buttplate. The plate has mostly gone to a dark patina and there is light-to-moderate pitting from surface erosion throughout. The butt compartment door functions correctly. Overall, the stock rates in Very Good-plus condition, as antique.

Bore Condition: The bore is only semi-bright but the rifling is well-defined. There are intermittent spots of minor erosion along with light stubborn fouling throughout.

Overall Condition: This rifle retains about 5% of its metal finish. A bit of case color is still evident inside the breech lock The case color swirl pattern is evident on the top of the breech lock and grip tang. All other metal surfaces have gone to a dark patina. The barrel has light nicks and scuffs throughout along with more notable stains along the left side at the rear. The lock plate is dark and has specks of light surface erosion throughout. The screw heads are lightly tool marked with strong slots. Overall, this rifle rates in Good condition, as Antique.

Mechanics: The action functions correctly. The hammer has quarter and half-cock safety positions. We have not fired this rifle. As with all used firearms, a thorough cleaning may be necessary to meet your maintenance standards.

Our Assessment: The Model 1873 “Trapdoor” Springfield was the first standard-issue breech-loading rifle adopted by the United States Army and was one of the main service rifles of the U.S. Military until it was gradually replaced by the Springfield Model 1892 bolt-action rifle. This rifle is a Model 1884 rifle that, given the Model of 1888 rod bayonet, is possibly one of the experimental models crafted in the time the armory was getting the rod bayonet technology up to spec—they did so with remaining Model of 1880 and 1884 rifles. The rod bayonet would not be officially adopted until mid-1890 specifically and would be standard on all Model 1888 rifles thereafter. It is also entirely possible an older, complimentary breech lock was added at some point as a replacement. The history of the Trapdoor rifle is fascinating in that we’re given an unusually detailed look into how Springfield Armory got from one version to the next, and this example is neat that it’s an in-between version. Good luck, and happy bidding!