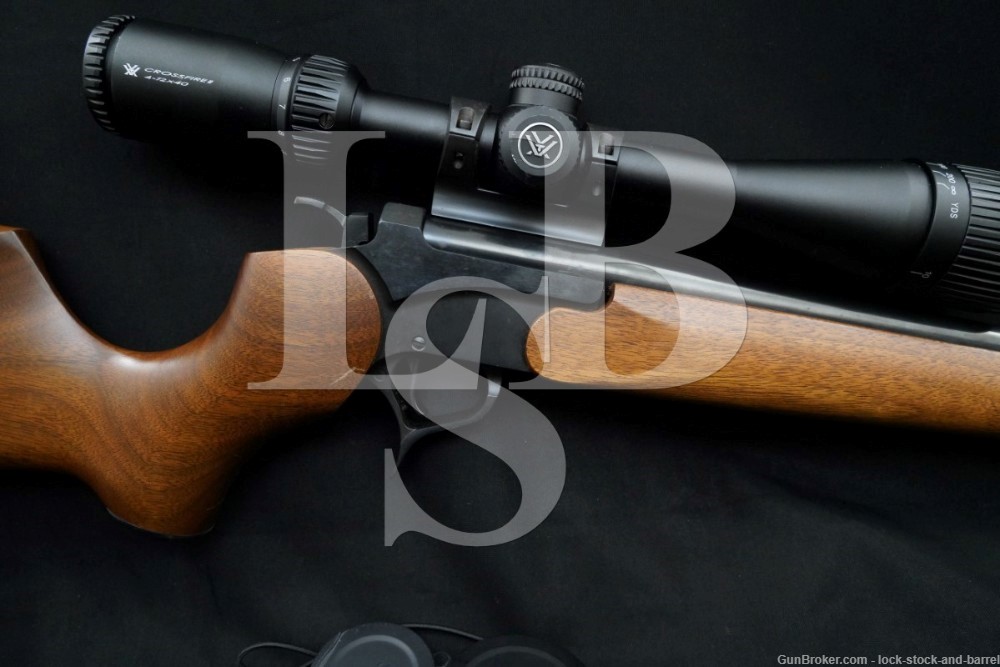 Markings: The top rear of the receiver is marked with the serial number. The left shoulder of the barrel is marked “ENCORE”, “THOMPSON/CENTER ARMS / ROCHESTER, NEW HAMPSHIRE”, and “22-250 Rem.”.  The recoil pad is marked “WARNING / FEDERAL LAW / PROHIBITS USE / WITH BARREL / LESS THAN 16in.” and the TC logo below.

Sights / Optics: There are no provisions for iron sights. Equipped at the rear of the barrel is a Vortex Crossfire II scope with 4-12x magnification and a Dead-Hold BDC reticle. The scope shows light wear and the lenses are clear. The scope rates in about Fine-Excellent condition.

Stock Configuration & Condition: The stocks are smooth wood with a capped pistol grip, monte carlo comb, sling stud front and rear, and a black rubber ventilated recoil pad. There are a couple of scratches on the belly just ahead of the sling stud. There are also some scratches on the front of the grip. The forearm has some infrequently dispersed little draglines and minor compressions. There are no chips or cracks. The LOP measures 14 3/4” from the front of the trigger to the back of the recoil pad, which shows some discoloration on the face and remains pliable. The stocks rate in about Fine overall condition.

Bore Condition: The bore is bright and the rifling is sharp. There is no erosion in the bore but there is some infrequent minor fouling.

Overall Condition: This rifle retains about 94% of its metal finish. The balance of the finish shows some scattered light surface oxidation on the trigger guard. There is also some faint surface oxidation on the sides of the receiver and a small spot on the left side of the barrel nearer the muzzle. The screw heads are sharp. The markings are clear. Overall, this rifle rates in about Fine condition.

Mechanics: The action functions correctly. The barrel locks up with no perceptible play and the trigger break is crisp. We did not fire this rifle. As with all used firearms, a thorough cleaning may be necessary to meet your maintenance requirements.

Our Assessment: In the 1960s, Warren Center developed an unusual break-action, single-shot pistol in his basement workshop that later became known as the Contender. Meanwhile, the K.W. Thompson Tool Company had been searching for a product to manufacture year-round. In 1965, Warren Center joined the K.W. Thompson Tool Company, and together, they announced Warren Center’s Contender pistol in 1967. Although it sold for more than comparable hunting revolvers, the flexibility of being able to shoot multiple calibers by simply changing out the barrel and sights and its higher accuracy soon made it popular with handgun hunters. As K.W. Thompson Tool began marketing Center’s Contender pistol, the company name was changed to Thompson/Center Arms Company. Then, in 1970, Thompson/Center created the modern black powder industry, introducing Warren Center’s Hawken-styled black powder muzzle-loader rifle. The Encore was released in 1983. The Encore uses a different trigger mechanism, designed to be stronger than the original Contender’s and to make the break-action easier to open. The Encore uses a considerably larger and stronger frame than the Contender, and accordingly, is found in over 86 cartridges – ranging from .22 Hornet to the huge .416 Rigby. This Ecore rifle is chambered for 22-250 Remington and a 26” heavy barrel. It retains much of its original finish and the barrel lock-up is tight. It comes equipped with a clean Vortex Crossfire II scope. Please see our photos and good luck!