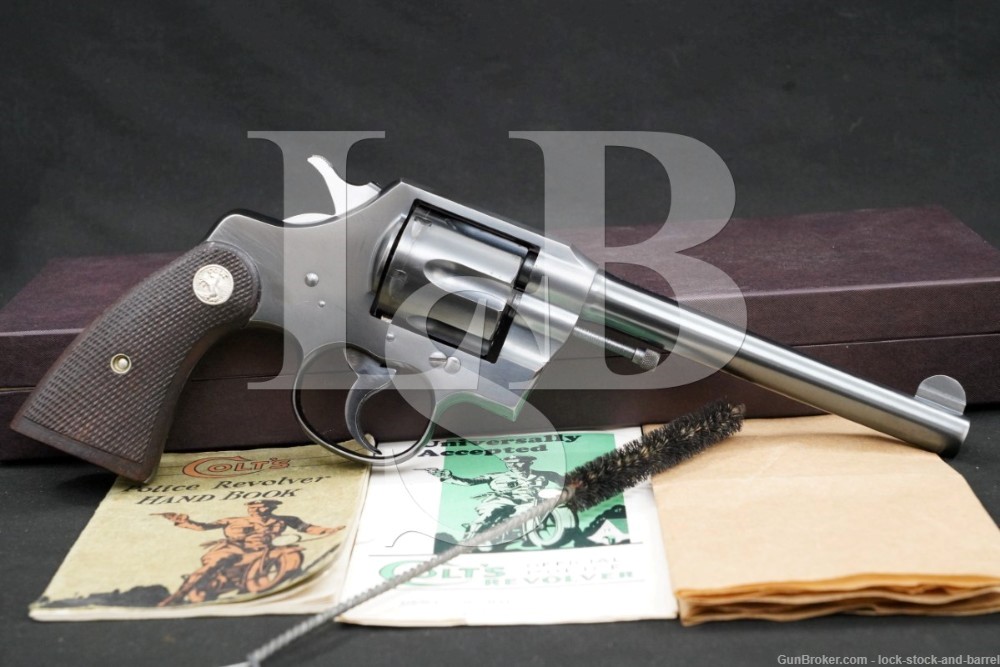 Sights/Optics: The front sight is a rounded blade fixed to the barrel. The topstrap is serrated for glare reduction and has an integral square-notch at the rear that serves as a rear sight.

Stock Configuration and Condition: Stocks are two-piece checked walnut, each with a Rampant Colt medallion at the top. Both panels have a somewhat darker appearance due to handling. Light verdigris can be seen in the escutcheon. Lower edges of both panels have a few minor dings. There are no chips or cracks and the checkering is well-defined. Overall, the grips rate in Fine condition.

Bore Condition: The bore is bright with sharp rifling. There is no erosion.

Overall Condition: This handgun retains about 94% of its metal finish. A turn line runs the circumference of the cylinder, which has also scattered spots of minor surface erosion and minor thinning on most edges. Light thinning can be seen on most edges of the frame. Moderate wear can be seen on the frame where it meets the side plate. Lower edges of the frame have taken on a very light plum hue. The side plate and sides of the frame have clusters of minor scrapes. The barrel has scattered light nicks, a few minor scuffs, a few spots of minor surface oxidation, and light holster wear at the tip. Screws are lightly tool marked but have strong slots, and all markings are clear. Overall, this revolver rates in Fine condition.

Mechanics: The action functions correctly. The cylinder lock up is utterly solid on each chamber with the trigger depressed. The double action trigger is smooth, the single action is especially light. We did not fire this revolver, though we imagine doing so is a true pleasure. As with all used firearms, thorough cleaning may be necessary to meet your maintenance requirements.

Our Assessment: A “successor” to the Army Special, the Official Police varied only in minor ways, such as the name and markings (the Official Police even retained the serial numbering of the Army revolver). Colt saw the majority of their “Army” revolvers going to police departments, and to paraphrase the Apostle Matthew, “Give not that which is holy unto the [Army],”. Colt simply focused their marketing efforts on the buyer that was buying. A few other minor changes that are worth mentioning are the rear sight going from a u-notch configuration to a square-notch, and the topstrap being dulled for glare reduction. In one hell of an understatement, Colt referred to the Official Police in advertisements as “[M]ost acceptable,”. Indeed.

This example is from the third year of proper Official Police production, a handsome firearm that, thanks to timeless design choices, is as pleasing to the eye now as it was in 1930—the small amount of honest wear does not detract from this fact in any way. The included box and original paperwork round out the package nicely. The cover of the manual features a striking illustration of a Police Officer wielding the revolver and leafing through the manual’s pages several wonderful photographs and illustrations. The craft that went into each aspect of Colt’ firearm packages is plain to see, and the included ephemera is as wonderful as the gun itself.

Colt collector’s would do well to add this Official Police to their collection. Though nearly half a million were made, we don’t often see many in such good condition that include original packaging such as this one. Good luck, and happy bidding!