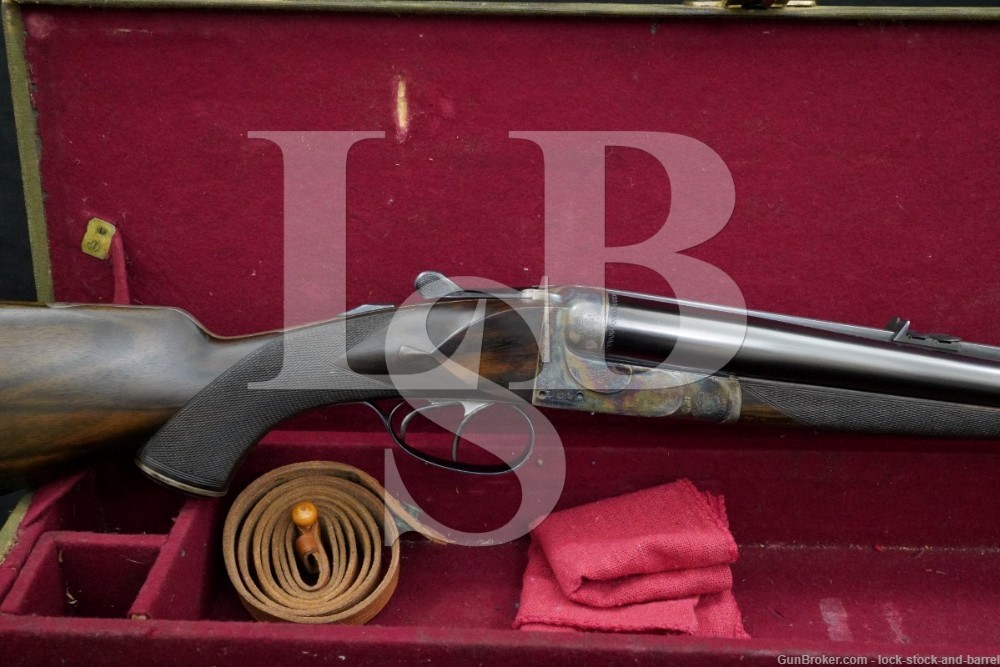 Make: Made in Belgium for Griffin & Howe

Sights / Optics: The front sight is a brass beaded blade in-line dovetailed to a base at the front of the rib. There is a brass reflector plate behind the blade and the base has a folding hood for the sight. An additional beaded blade front sight is included, currently stored in the compartment inside the grip. The additional front sight also has a brass reflector plate. The rear sight is an Express-style sight with a fixed “V”-notch marked “100” and two taller folding “V”-notch leaves marked “200” and “300”. The rear face of each notch is finely matted with a vertical gold line aiming reference. The rear sight assembly is dovetailed to the quarter-rib at the rear of the barrels, the top of the rib is finely checkered for glare reduction.

Stock Configuration & Condition: The stocks are two-piece checkered walnut with splinter forend, capped pistol grip, straight comb with European-style shadow-line cheekpiece, orange rubber buttpad, and sling swivel in the belly (the other swivel is mounted to the barrel rib in front of the forend). The case-color steel grip cap has a trapdoor covering a small storage compartment which currently holds the spare front sight blade. The stocks have some scattered light handling marks. There are a few more notable nicks and scratches in the buttstock behind the grip, most notable are on the cheekpiece, the heel and on the right above the sling swivel. There is a tiny loss at the left edge of the guard where it bends down in the transition from the bottom tang to the trigger guard. The checkering is well defined. There are no cracks. The LOP measures 14 1/8″ and 13 1/8″ from the fronts of the triggers to the back of the buttpad, 13 3/8″ and 12 3/8″ to the back of the wood. The pad shows scattered discoloration, wear and surface cracking, and has hardened with age. The cast is about neutral. Overall, the stocks are in Very Good-Fine condition.

Bore Condition: The bores are bright with sharp rifling. There is no erosion in the bores.

Overall Condition: This rifle retains about 96% of its metal finish. The barrels have some scattered minor nicks, scratches and handling marks, most over the forend. The receiver retains strong case color in most areas, it is not clear if the more muted color of the tang behind the safety switch is the natural color or due to handling/age. The guard has strong blue finish with a few light marks on the edges of the trigger guard and faint handling wear in the tang. The action shows light operational wear. The screw heads are sharp. The markings are clear. Overall, this rifle is in Fine condition.

Mechanics: The action functions properly. The barrels lock up with no play. The safety engages automatically when the action is opened. We have not fired this rifle. As with all previously owned firearms, a thorough cleaning may be necessary to meet your maintenance standards.

Box, Paperwork & Accessories: This rifle comes in a luggage case with brass corner bolsters, carry handle, and English-style straps and includes a thin, brown leather sling. The case shows moderate storage wear, consistent with the age of the gun. There are two screws with exposed threads inside the tray portion at the hinge, care should be taken not to allow them to contact the gun during storage or transport.

Our Assessment: Most frequently chambered for potent cartridges and giving the user an extremely fast and reliable follow-up shot, double rifles have long been considered the quintessential gun for safaris and dangerous game. This example was made in Belgium for Griffin & Howe Inc., and is a robust gun chambered for the .470 Nitro Express cartridge. Griffin & Howe started the company in 1923 to produce custom sporting rifles based on Springfield actions. Inspired by Theodore Roosevelt’s exploits in Africa with a sporterized 1903 Springfield, custom cabinet-maker Seymour Griffin re-stocked his own rifle. In 1923, none other than Col. Townsend Whelen, commander of the Franklin Arsenal, suggested James V. Howe, the foreman of the Arsenal, would greatly improve Griffin’s budding custom rifle business. They later made custom rifles based on other actions and enjoyed a reputation for making products of the finest quality. Gary Cooper, Ernest Hemingway, Clark Gable and Jack O’Connor were among their customers. This is a beautiful example of a Griffin & Howe double rifle with a distinctive long top tang which extends back into the comb. The rifle is in Fine condition with about 96% of its metal finish, light wear in the stocks, great bores and a tight lockup. This rifle still has more trips in the field left, and would make a great safari gun while also being suitable for the largest North American game and predators. It doesn’t hurt that it’s a beauty, too! This will take a prized place in any collection, whether you’re looking for a powerful hunting gun or simply a wonderful example of a Griffin & Howe double rifle. Please see our photos and good luck!