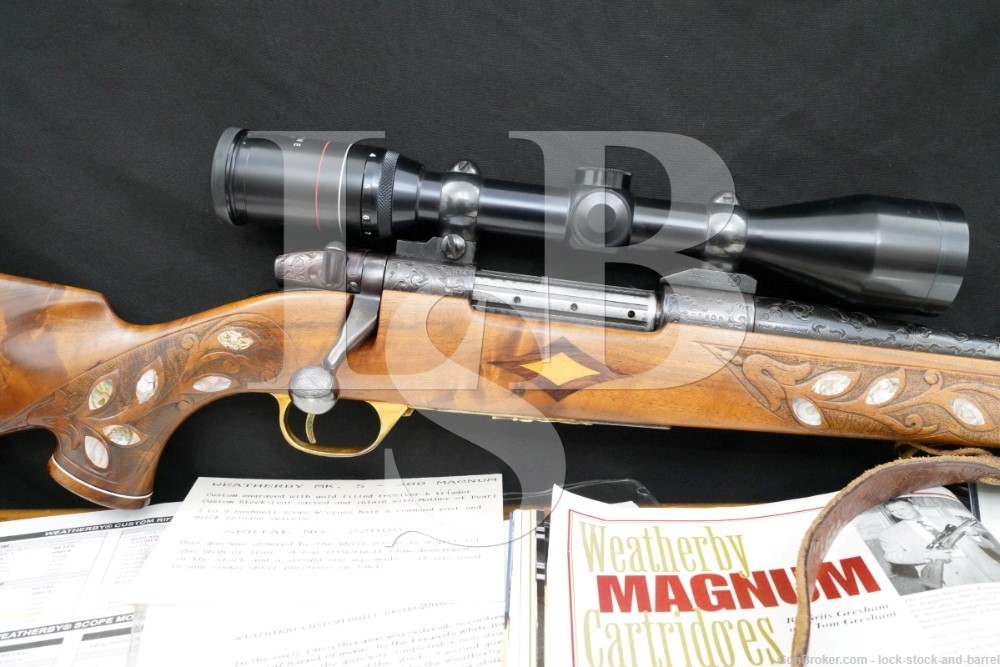 Sights / Optics: The top of the receiver is drilled and tapped with two-piece Buehler bases and rings holding a Weatherby Supreme 3-9×44 scope with duplex reticle. The scope has light handling marks and clear glass, in Fine condition.

Stock Configuration & Condition: The stock is a factory custom American walnut with monte-carlo comb, rosewood tip, rosewood grip cap, double spacers with a brown ventilated rubber Weatherby recoil pad and gold finished sling studs front and rear for the included gold finished QD swivels. The stock has Pattern #21 laurel leaf carving with abalone inlays. There are diamond-shaped inlays on either side of the stock below the receiver, on the right of the buttstock, and in the bottom of the grip cap. There is another diamond-shaped inlay on the bottom of the forend which has a gold diamond-shaped center. Nearly all of the stock’s original gloss finish has been removed, but the wood shows very little sign of sanding. There is a thin crack on the left of the stock extending up from the trigger and a shorter, thinner crack on the right extending up from the rear of the floorplate (see Our Assessment). Otherwise, the stock shows only light handling marks. The LOP measures 13 3/8″ from the front of the trigger to the back of the recoil pad. The pad has light wear and has hardened slightly with age. Overall, the stock is in about Very Good condition as refinished and would easily rate Fine-plus but for the cracks.

Bore Condition: The bore is mostly bright and the rifling is sharp. There is some stubborn fouling toward the muzzle end, but there does not appear to be any erosion.

Overall Condition: This rifle retains about 95% of its current metal finish. The balance is mostly in handling wear around the edges of the bottom metal. The jeweled bolt and magazine follower show light operational wear. The checkered bolt knob has some minor handling wear. The finish of the receiver and bolt sleeve have a plum hue. The screw heads show tool use with strong slots. The markings are clear with soft edges. Overall, this rifle rates in Fine condition as refinished.

Mechanics: The action functions correctly. We have not fired this rifle. With all previously owned firearms, a thorough cleaning may be necessary to meet your maintenance standards.

Box, Paperwork & Accessories: This rifle includes the installed scope as described, a tooled brown leather sling and an assortment of documentation provided by the consignor including a Weatherby Letter of Authenticity. The letter confirms that the rifle, though refinished, is in its original configuration and was shipped to the Weatherby Retail Store in South Gate, California in February, 1968. Additional documentation will be covered in Our Assessment.

Our Assessment: Roy Weatherby’s name is now associated with the company he created, mostly out of necessity. Weatherby was a wildcatter, modifying existing cartridges to generate improved performance. The cartridges he developed were pushing the envelope of what could be safely handled by even the strongest actions of the day, so he did the only logical thing. He started his own company making rifles with the strongest actions he could design so that they could safely fire his Weatherby Magnum cartridges. The rest, as they say, is history and Weatherby continues to make fine rifles to this very day. Roy was not content with just making rifles which were strong enough to handle powerful cartridges, he also gave them a unique style, with high-gloss stocks, rosewood caps and a distinctive monte-carlo comb, fancy inlays, and attractive checkering patterns which, combined with South Gate’s location nearby the film industries capital, lead some to call them “the Hollywood Rifle”. The rifles became quite popular and were purchased by Hollywood stars such as Roy Rogers and John Wayne. They were also given as opulent gifts, including at least two gifted by the Kennedy administration to other national leaders such as the President of Mexico and the Shah of Iran. According to documents provided by the consignor of this rifle, it was produced at the behest of the Kennedy White House for just this purpose, to be given to Mohammad Reza Pahlavi, the Shah of Iran. It almost made it, too. During construction, a “non structural flaw” developed in the stock, the cracks mentioned above, and another rifle was completed to be gifted to the Shah. This rifle was retained by Weatherby to be displayed at gun shows and supposedly was also used by Roy Weatherby himself for some time as a personal hunting rifle. Eventually, Roy would sell the rifle to a friend of his who also used the rifle to hunt from the Outback to Alaska, Canada, and Africa. The rifle has been refinished and equipped with a Weatherby scope. From its gorgeously figured stocks to its extensive engraving, the gold tiger on the floorplate to the abalone inlays, this is just a work of art which happens to have used as its canvas a fantastic rifle with a strong action chambered for a versatile hunting cartridge. The documentation included with this rifle is sure to attract the attention of the collectors, but don’t forget that it will also make for a wonderful hunting gun that can take game all across the world. Please see our photos and good luck!