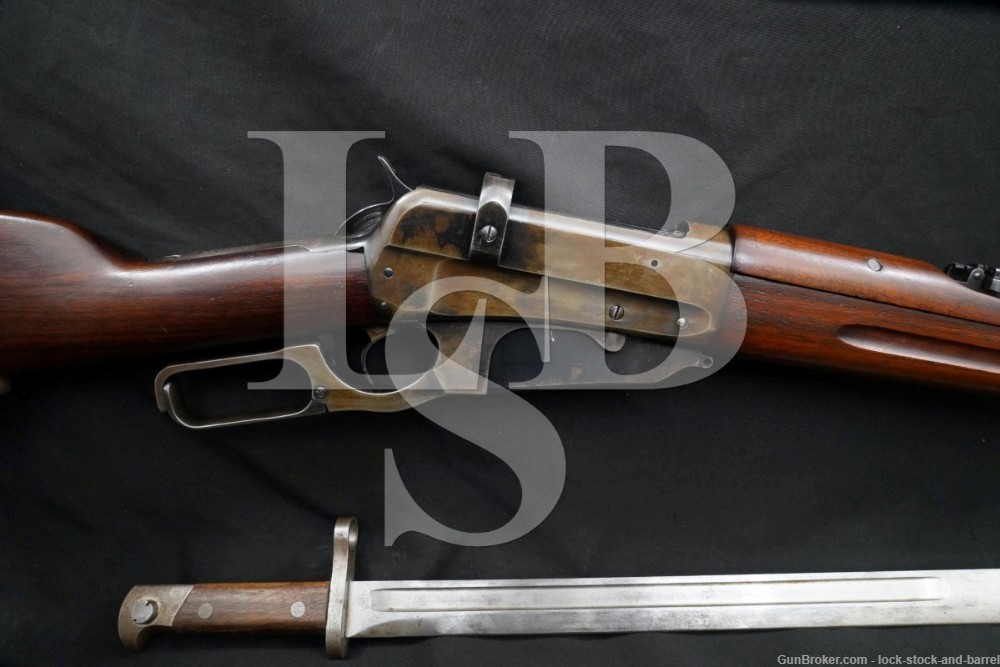 Sights / Optics: The front sight is a blade pinned in a slotted base fixed to the front of the barrel. The rear sight is a folding ladder-style sight fixed to the rear of the barrel. There is a slider which presents a “V”-notch when folded down and also has a “V”-notch when folded up. The left of the base is marked “4, 6, 8, 10, 12, 13, 14” for use when the ladder is folded down. The ladder is marked from 15 to 31 on alternating sides with a small notch at the top of the ladder marked 32.

Stock Configuration & Condition: The stocks are three-piece smooth walnut with a handguard secured with spring clips installed around the rear sight, a band at the front of the forend which incorporates a bayonet lug, barrel band with sling swivel, finger grooves in the forend, straight grip, straight comb, steel carbine-style buttplate with sliding door, and a sling plate inlaid to the belly. There is another sling mounting point built into the front of the magazine. The stocks have some scattered light nicks, scuffs and scratches. There are small losses at the top-front corners of the wrist to each side of the top tang. The handguard has cracked through along the top behind the cut-out for the rear sight, and been repaired with adhesive and internal staples. The LOP measures 12 5/8” from the front of the trigger to the back of the buttplate. The plate shows scattered wear, mostly at the heel and toe, and some minor discoloration from oxidation. The stocks rate in about Very Good overall condition.

Finish Originality: Most remaining finish is Original, the worn areas of the receiver and lever show treatment with cold blue.

Bore Condition: The bore is mostly bright with sharp rifling. There is infrequent minor erosion in the bore, mostly in the grooves at the muzzle-end.

Overall Condition: This rifle retains about 80% of its metal finish. The finish is thinning at all edges. The balance is mostly in wear on the receiver and lever, though there are some areas which still have strong blue finish. The worn areas show treatment with cold blue and discoloration from oxidation. There is wear at the muzzle consistent with bayonet installation and removal. There is wear in front of and behind the rear sight from the spring-clips of the handguard. There are some scattered light nicks, scuffs and scratches. The action shows operational wear. The screw heads are tool marked with serviceable slots. The markings are clear. Overall, this rifle rates in Very Good condition.

Box, Paperwork & Accessories: This rifle comes with a bayonet. The bayonet is the long pattern with a 16″ blade, 21 1/2″ overall length, and is marked “WINCHESTER REPEATING ARMS CO.” on the front face of the guard. The metal parts show scattered minor surface oxidation. The edge is not particularly sharp. The wood has a few nicks and light handling wear.

Our Assessment: This rifle was something of a noteworthy piece. From Gary James in Guns & Ammo:

“On paper, at the beginning of World War I, the Russian Army was the most formidable land force in the world. With almost three million men under arms, it was a potential juggernaut that terrified the German general staff. The only problem was, supplies and equipment were woefully short, and over a third of the army didn’t even have guns! A solution was found from a most unlikely source when the Winchester Model 1895 lever-action rifle entered the service of the czar.

The standard-issue Russian infantry rifle at the time was the Model 1891 Mosin-Nagant. It was a very good bolt-action repeater; the only problem was the Russians couldn’t make enough of them. At the Battle of Tannenberg, for instance, half of the Russian infantry went into battle unarmed and had to pick up the rifles of their fallen comrades. This terrible shortage of arms caused the Russians to turn to the neutral United States for a solution.

As well as contracting with Westinghouse and Remington to make Mosin-Nagants, they went to Winchester and ordered 300,000 long-barreled musket versions of the Winchester Model 95 lever-action, chambered in the service caliber of 7.62 x54Rmm. The 7.62x54Rmm fired a 210-grain .30 caliber bullet with a muzzle velocity of almost 3,000 feet-per-second, pushing it up into the .30-06 class. Despite their rims and thick girth, the cartridge functioned well in the gun, and reliability and accuracy was excellent.

Ultimately more Russian 95s would be manufactured than any other variant of that gun.

Though it may seem unlikely, the Model 95 was an excellent choice. Winchester was already tooled up for it and it was strong enough to handle the stout Russian round. The Model 95 was John Browning’s first lever-action specifically designed for smokeless powder. All that was necessary was to take it from a sporting configuration to a military one was to stretch the barrel and fit it with a bayonet lug and charging bar so the gun could be loaded with a stripper clip.

Actually, the 95 musket was not really a new arm. In 1898, the American secretary of war had ordered 10,000 of them for use during the Spanish American War, but the conflict was so short they never made it to the front. Later on, some were used in the Philippines, though. These guns did not have charging bars, as the issue American rifle of the period, the Krag-Jorgensen, was not clip loaded. Most of these guns ended up being sold of surplus to Caribbean and Central American countries. Up to this time all lever-action rifles fed from a tubular magazine, but the pointed bullets of the new high-powered smokeless rounds made this hazardous because of the danger of setting off rounds placed nose to primer in the tube. Model 95s eliminated the problem by featuring a five-round box magazine that was loaded through the top of the receiver

The rifle didn’t have a safety catch, relying upon a hammer half cock to do the job. The lever though, had a hinged lower portion that locked into position and prevented the action from being opened unless the shooter’s hand is actually pushing down on the loop.

But with the onset of the Bolshevik Revolution and the withdrawal of Russia from the war, the 95’s fate becomes cloudy. Some have turned up with markings indicated that they were sold to Republican forces during the Spanish Civil War, and many thousands were later re-imported to the U. S. in the 1960s where they were offered at very reasonable prices.

Today, the Russian Winchester 95 remains one of the most romantic and unusual arms of the Great War. They are sought-after collector’s items, and at the same time, sad reminders of a once-proud regime’s unpreparedness for war.”

This example was produced in 1920, too late for delivery to the Russians. It’s not clear if this rifle was assembled as part of a parts clean-up effort, utilizing parts which had been rejected by the Russian inspectors, or if Winchester thought there would be a market in America for an 1895 Musket chambered for the Russian 7.62mm cartridge. In any case, it’s a handsome rifle in Very Good condition, likely faring better than most of the 1895s that made their way to Russia, just in time for a Revolution and Civil War, not to mention the purges and violent repression which would follow. With the included Winchester bayonet, it will make a great addition to a collection of Winchesters and may fill a slot in a WWI small arms collection until you can get one which was delivered on the Russian contract. It should also still make for a great shooter, the rifles were zeroed with bayonets installed, so having one included should help get you on paper. Please see our photos and good luck!