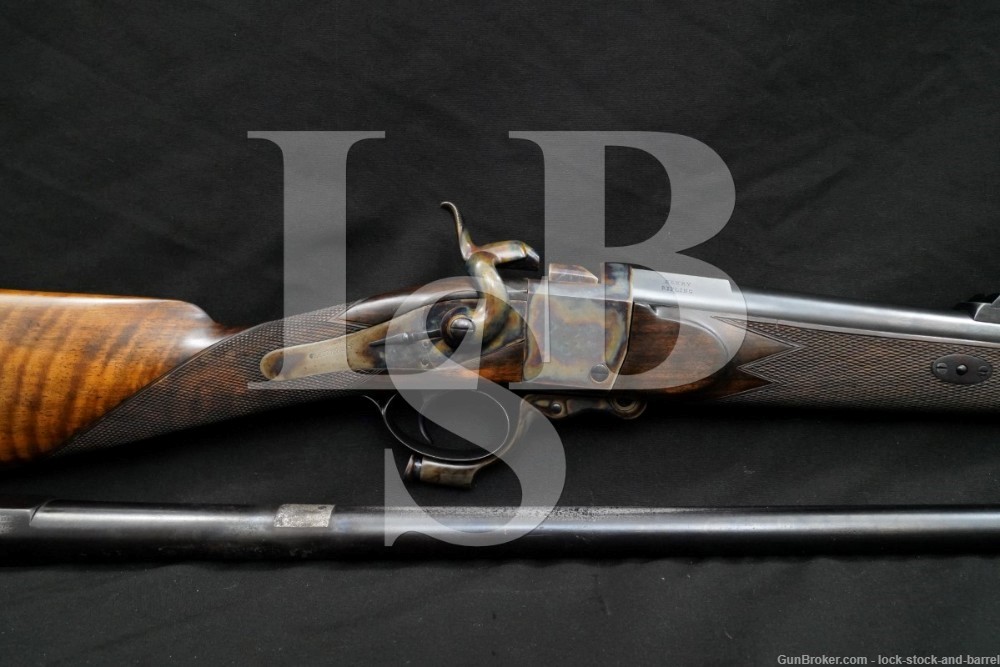 Make: Alexander Henry, we do not know who restored the rifle or made the new barrel.

Serial Number: The original barrel’s serial number is 5783. The barrel has matching assembly numbers to the receiver and lever.

Caliber: The original barrel is most likely chambered for .450 Black Powder Express 3 1/4″, but we do not have a cartridge to test-fit.

The consignor stated that the installed barrel is .45-90, but we were able to set .45-110 and .45-120 cartridges in the chamber, though their rims were too thick for the breech-block to close. We suspect that this new barrel is also chambered for the .450 BPE 3.25″ cartridge. The chamber should be cast to confirm prior to firing.

The original barrel is marked “ALEX. HENRY LONDON & EDINBURGH” in front of where the rear sight was mounted, with British proofs on the top-left toward the rear, “HENRY RIFLING” (this barrel does have Henry pattern rifling) on the right of the knox-form, the bottom of the barrel is marked “3”, “W.”G” and “98”, the bottom flat is marked “5783 / A.H” and with an “S” in circle.

Sights / Optics: The front sight is a beaded blade in-line dovetailed to a rectangular base fixed to the front of the barrel. The rear sight is a fixed “V”-notch with a taller folding “V”-notch, each with vertical platinum aiming references, dovetailed and screw-set to a rectangular base fixed to the rear of the barrel. Given the original barrel having no sights installed and with solder residue at their previous locations, it appears that whoever restored the rifle installed the original sights on the new barrel (also possibly the lug for the forend pin).

Stock Configuration & Condition: The stocks are two-piece checkered walnut. The forend is secured with a pin. The buttstock has a straight grip, straight comb and a smooth steel buttplate. The forend has a nick under the finish at the top-rear corner on the left and a scratch on the left-front with very small losses at the bottom-rear edge to each side of the lever. There is a slight gap between the forend and the receiver. The buttstock has a couple of nicks in and on the top edge of the loading groove and there is discoloration which appears to be from some sort of fill or bedding compound around the rear edge at the buttplate. There are a few other scattered minor nicks and scratches, most under the finish. The checkering is sharp. The LOP measures 14 1/8″ from the front of the trigger to the back of the buttplate. The plate has minor wear at the heel with otherwise strong finish. Based on the filling at the rear of the buttstock and markings under the finish, we suspect that these are the original stocks which have been restored with checkering cut or re-cut. Overall, the stocks are in about Fine condition as refinished Antique.

Finish Originality: Refinished, the barrel is a replacement.

Bore Condition: The bore of the installed barrel is bright with sharp rifling and no erosion.

The original barrel’s bore is dark with well defined Henry-pattern rifling. There is scattered erosion and pitting in the bore.

Overall Condition: This rifle retains about 98% of its metal finish. There is some minor erosion under the finish on the bottom tang. The action shows minor operational wear. Otherwise, there are only light handling marks. The screw heads are generally sharp, there are a couple with very light tool marks in strong slots. The markings on the rifle are clear, the original barrel’s markings are worn with some incomplete. Overall, this rifle is in Excellent condition as restored Antique.

Mechanics: The action functions correctly. The hammer safety can be engaged when the hammer is at half-cock. The trigger is crisp. We did not fire this rifle. As with all used firearms, a thorough cleaning may be necessary to meet your maintenance standards.

Box, Paperwork & Accessories: This rifle comes with the original barrel as described.

Assessment: While his name is now best associated with the British Empire’s Martini-Henry rifles and carbines, Alexander Henry was a well respected Scottish gunmaker, officially appointed as maker to the Prince of Wales and Duke of Edinburgh. He was also something of a big deal in Edinburgh politics of the 19th century, being a Moderator of the High Constables, town Councilor, Justice of the Peace, admitted to the Royal Scottish Society of Arts, as well as being a Freemason. This is a quite skillfully restored example of his 1865 patent falling-block rifle, produced circa 1884. The restoration process included replacing the barrel, but the original barrel is included and whoever restored the rifle has reproduced most of the markings on the new barrel. The complete lack of decoration on the metal as well as the forend being secured by a pin may hint that this is a particularly interesting variant. Most other examples of this rifle we could reference had their forend secured with wedges or screws, the only one we could find which was secured by a pin was a Sealing Rifle, produced for the express purpose of hunting, or rather “fishing”, seals for their oil and blubber. The Sealing Rifles saw hard use and were exposed to rough handling and salt water. Most sealing crews would put hundreds or thousands of rounds through their rifles and would replace them each season, so special adornment was neither necessary or cost-effective. Part of the restoration of the rifle included cutting checkering into the stocks, but if they were originally plain it is quite possible this was a Sealing Rifle, which would be in line with the erosion seen on and in the bore of the included original barrel. In any case, this is a wonderful example of the Alexander Henry falling block rifle which has been lovingly restored, resulting in a beautiful piece that is perfect for the collector, but which could also still be used for hunting. Please see our photos and good luck!