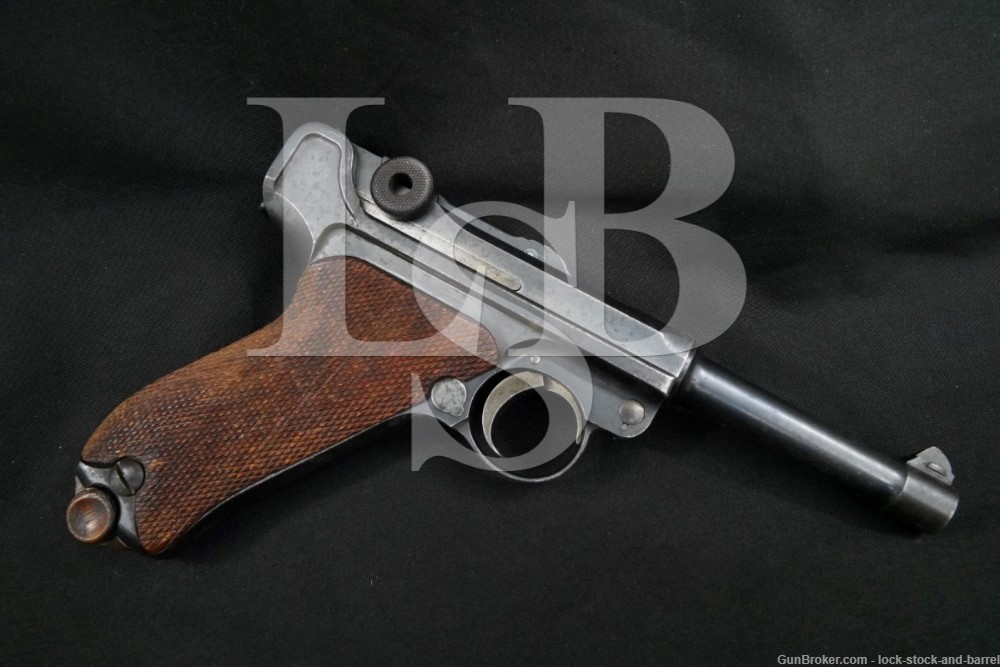 Stock Configuration & Condition: The grips are checkered walnut. The grips have light handling wear with some scattered minor nicks, scuffs and handling marks. There is some discoloration from age and oil. The left panel has a few spots of smoothed checkering, most notable at the bottom edge and behind the magazine release. The right panel’s checkering is well defined. There are a couple of tiny losses at the front edge of the left panel. There are no cracks. Overall, the grips are in Very Good-plus condition as possibly not original to the gun.

Finish Originality: Given the installed bolt-stop, the pistol has been rearsenaled at least once. The finish appears original to arsenal rebuild.

Bore Condition: The bore is gray. The rifling is well defined. There is light-moderate erosion and minor pitting scattered through the bore.

Overall Condition: This pistol retains about 80% of its metal finish. The finish is thinning at all edges. There is some scattered light surface oxidation, most notable in the grip areas where there is handling wear. There is some scattered minor surface erosion with a more notable spot on the front toggle link next to the “DWM” marking. There are a few scattered nicks, scuffs and scratches with two more notable scratches on the right of the frame between the grip panel and the frame rail. The controls have handling wear. The action shows operational wear. The screw heads are tool marked with strong slots. The markings are generally clear, the Imperial eagles are worn, but visible. Overall, this pistol is in Good-Very Good condition.

Mechanics: The action functions correctly. The barrel extension has barely perceptible play to the frame. We did not fire this pistol. As with all used firearms, a thorough cleaning may be necessary to meet your maintenance standards.

Box, Paperwork & Accessories: This pistol comes with a single magazine with wooden base. The magazine sticks at the top and bottom of the pistol’s magazine well. We did not experience this issue with other magazines we tried, so it appears to be an issue with the magazine. Otherwise, the magazine shows operational wear, infrequent minor erosion, intact feed lips and a strong spring.

Our Assessment: The Luger (Pistole Parabellum or P-08) is perhaps the most aesthetically and ergonomically pleasing of all autoloading centerfire pistols. Georg Luger developed his famous pistol in 1898-1899 (starting with the Borchardt/Luger transitional pistol). The Luger is, essentially, a much improved Borchardt type pistol, which was itself based on the toggle action concept used by Sir Hiram Maxim in the world’s first practical machine gun. The Maxim shot its way to bloody fame in World War One, which also became the combat proving ground for the Luger Pistol. The Luger was so well liked and reliable that it was still being made and issued to German troops well after the P38 was adopted by the army. This DWM Luger was made in 1909 and referred to by collectors as a “First Issue”, though some would call it a “Second Issue” due to the addition of a bolt hold-open. These 1909 produced pistols had commercial-style serial number placement, no bolt hold open, no stock lug on the frame. In 1913, specifications were changed to include a bolt hold-open and most of the First Issue pistols still in inventory at the time were updated. This indicates that this pistol was still in inventory as of 1913 and may have seen use in the Great War after this. The pistol is in Good-Very Good condition with much of its finish remaining. Most of the serialized parts are still matching, though the takedown lever has been replaced and we suspect that at least one grip panel is a replacement. The pistol shows honest wear, a fair bore and generally strong mechanics, though the magazine which is included is a little sticky when inserting and removing. This quite early production P.08 will make a great addition to a Luger or German military arms collection. Please see our photos and good luck!