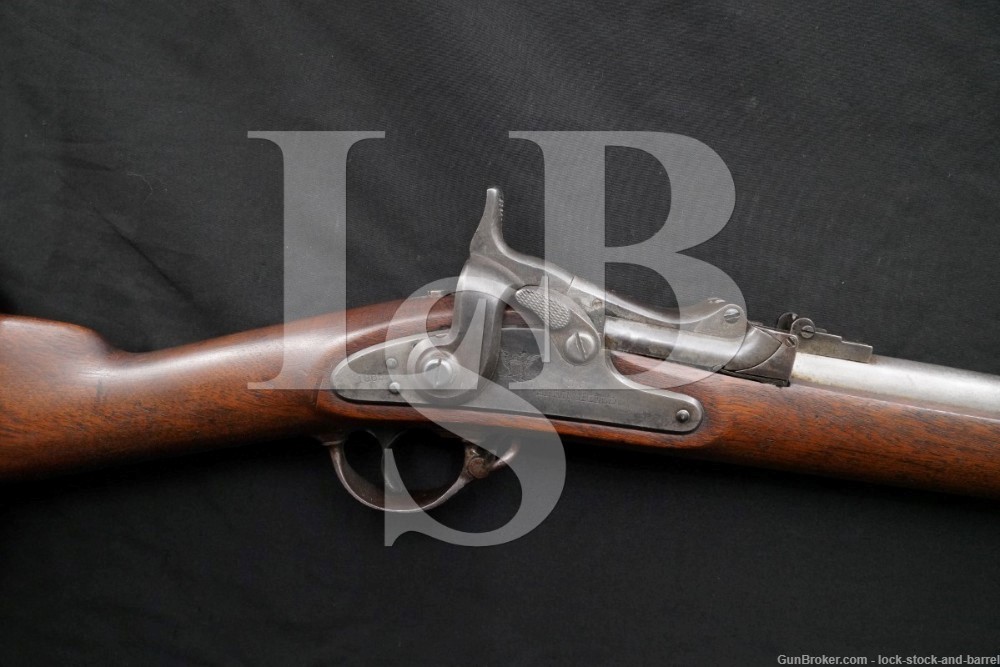 Year of Manufacture: Circa 1865

Sights/Optics: The front sight is a blade pinned to a rectangular base set on the barrel. The rear sight is a flip up v-notch when in the down position. When flipped up, it is in a v-notch range-finding configuration.

Stock Configuration and Condition: The stock is a one-piece smooth wood with straight grip, straight comb, and sheet steel buttplate. There are three barrel bands. There is a channel in the stock for the included ramrod. There are sling swivels on the trigger guard and center barrel band. The stock has scattered light nicks and compressions along with darker, older marks that have been oiled over. The LOP measures 13 1/2” from the front of the trigger to the back of the buttplate. The plate has light surface oxidation throughout along with moderate scuff wear at the heel and toe. Overall, the stock rates in Good condition, as antique.

Bore Condition: The bore is semi-bright with well-defined rifling. There is some minor erosion scattered throughout.

Overall Condition: This rifle was finished entirely bright. Spots of minor surface oxidation are peppered throughout the metal. There are a few more notable stains on the barrel between the middle and forward barrel band. The barrel has scattered light nicks and scuffs. The lock plate, hammer and breech lock have mostly gone to a light patina. Sling swivels have gone to a light patina. The screw heads are lightly tool marked with usable slots. Markings are clear. Overall, this rifle is in Very Good condition, as antique.

Mechanics: The action functions correctly. The hammer has a half-cock safety position. We have not fired this rifle. As with all used firearms, thorough cleaning may be necessary to meet your maintenance standards.

Box, Paperwork, and Accessories: This 1865 includes a barrel mounted bayonet and a black leather sling.

Our Assessment: This Erskine Allin altered 1865 conversion is a first model example, an early iteration that paved the way for the seminal Trapdoor rifle. They were older muskets converted to cartridge firing rifles, this one being chambered .58 Rimfire. At first, the barrels were re-lined, but often that lining would separate after firing, and in the end the barrels were replaced entirely. The 1865 holds a fascinating place in the history of military rifles as it serves as a bridge between the old weapons of war and the new. This is a neat piece for the Trapdoor completist. Good luck and happy bidding!