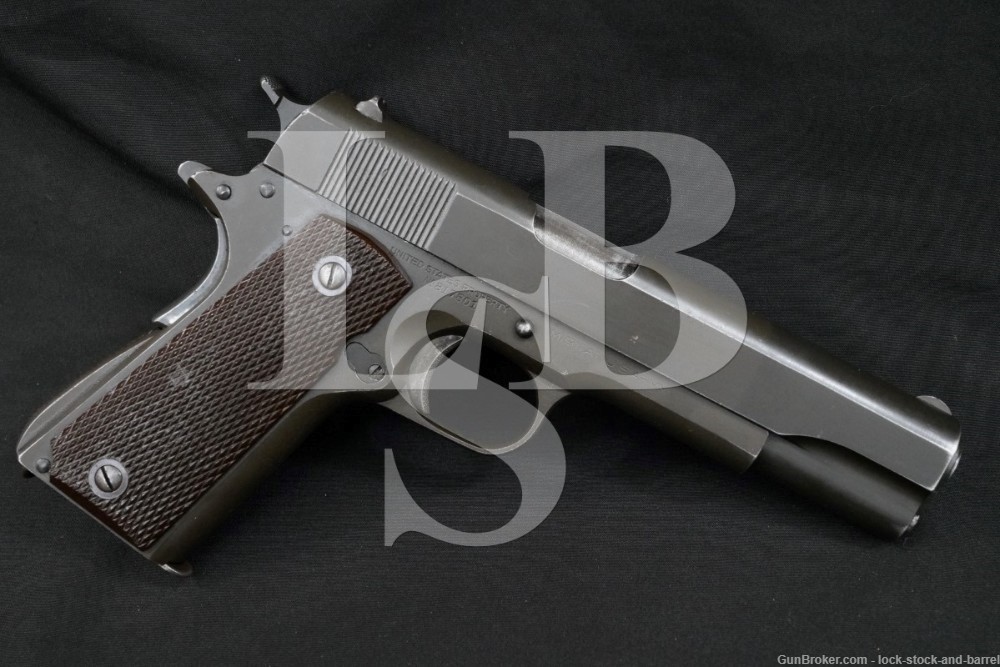 Year of Manufacture: Colt indicates production in 1943 (https://www.colt.com/serial-lookup), per Clawson, this pistol was shipped in late August or early September, 1942.

Stock Configuration & Condition: The grips are two-piece checkered brown Coltwood plastic with reinforcement ribs on the inside and with large reinforcing rings around the grip screws. There are mold number markings on the inside where the ribs cross. The grips have light handling wear with a few scattered light marks. Each panel has a small patch of compressed checkers, at the rear edge of the left panel and a little more toward the middle on the right panel. Otherwise, the checkering is generally sharp. There are no chips or cracks. Overall, the grips are in Very Good-plus condition.

Finish Originality: Likely Arsenal Refurbished. There is media blasting in the markings, but we could not find a good reference as to whether or not media blasting was performed by Colt before or after markings were applied. The correct parts and serial-matching slide may indicate that the finish is original. Please see our photos.

Bore Condition: The bore is gray with sharp rifling. There is some light erosion in the bore, mostly in the grooves.

Overall Condition: This pistol retains about 94% of its current metal finish. The finish is thinning at most edges. The finish is generally strong throughout with a few scattered nicks and scuffs through the finish, most notable in the frontstrap and on the left of the dust cover. There is some scattered minor erosion under the finish, most notable on the top of the slide. There are some scattered nicks and scratches which are not the finish, most notable on the top of the slide in front of the rear sight and in the right slide serrations. The trigger has markings on it indicating that a trigger shoe was installed at some time in the past. There is an “idiot mark” under the slide stop. The action shows operational wear, most notable on the barrel. There is stubborn, dried grease build-up under the grips. The screw heads are tool marked with strong slots. The markings are generally clear, the left-side slide markings are worn, but legible. Overall, this pistol is in Very Good-plus condition.

Box, Paperwork & Accessories: This pistol comes with a single 7-round magazine. The magazine’s floorplate is marked “L” on the top, indicating production by M.S. Little. The magazine has been plated with nickel or tine, showing scattered wear, some discoloration from oxidation, minor surface erosion and a strong spring. There is a tiny crack in the top-rear edge of the body at the left feed lip.

Our Assessment: The 1911 and 1911-A1 pistols served the military of the United States from 1911 to 1985, through two World Wars and the Korean and Vietnam wars. They gained a reputation as a reliable handgun with plenty of stopping power, and are held in high regard by those who have used them. This example was produced by Colt in 1943 as the design saw some tweaks and changes. This pistol was made a little after the switch to parkerized finishing and has the third Coltwood grip style with reinforcement ribs. It has the earlier-style rounded front sight which would be replaced with a serrated, ramped rear face and a “U”-notch rear sight which would be replaced by square notches. The hammer has the original wide-spur which would soon be replaced by a spur of the same width as the body. The slide stop, thumb safety and mainspring housing are all checkered, each of which would eventually be serrated. In all, this is a great example of a late-192/early-1943 production Colt M1911A1. It was produced when the slides were still serialized, so it’s nice to know that it still has its original slide, too! The pistol is in Very Good-plus condition, retaining about 94% of its current metal finish, a decent bore and strong mechanics. It will make a nice addition to a Colt or WWII small arms collection. Please see our photos and good luck!