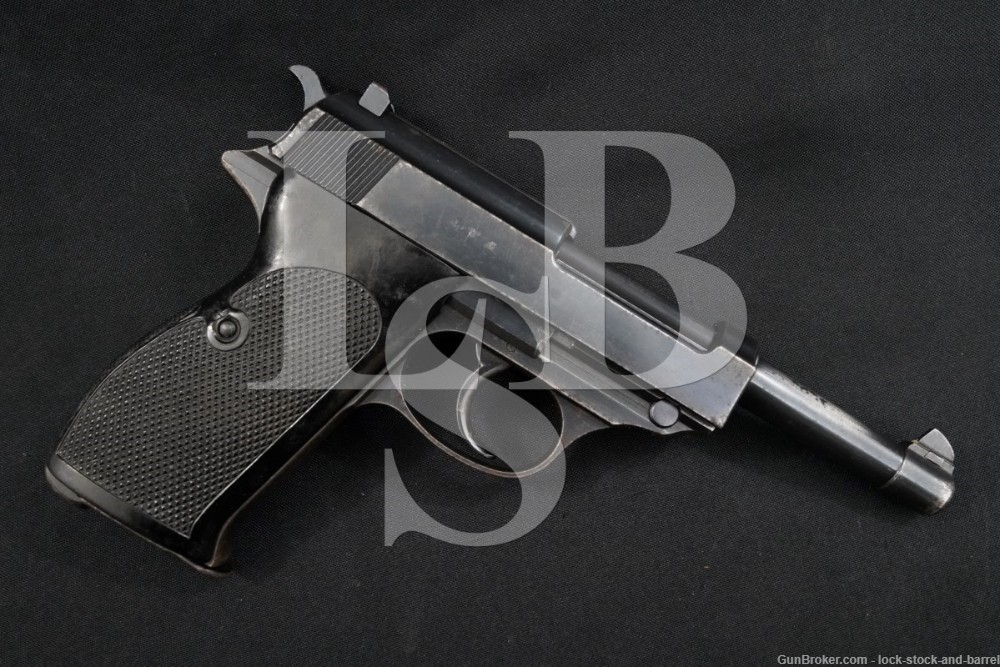 Action Type: Single or Double Action Semi-Auto with Removable Magazine. This pistol has a de-cocker safety.

Sights / Optics: The front sight is a blade dovetailed to a boss at the front of the barrel. The rear sight is a “U”-notch dovetailed to the rear of the slide. There are remnants of white paint on the rear of the front sight and red paint on the back of the rear sight. Per Buxton’s “The P.38 Pistol”, “Starting in the early 6000 range (06022) colored sights, i.e. red banded rear, white front, appear from time to time.”.

Stock Configuration & Condition: The grips are two-piece black checkered plastic, 1st Variation Walther panels. The left panel has a distinctive circular depression with a slot for the frame’s lanyard ring. The grips have scattered light wear with some tool marks around the grip screw escutcheons and scuffing in the smooth borders, most notable in the top of the right panel. Some areas show minor chemical erosion as from handling or cleaning solvents. The checkering is well defined. There is a tiny loss in the rear edge of the left panel toward the top. There are no cracks. Overall, the grips are in Good-Very Good condition.

Bore Condition: The bore is semi-bright with sharp rifling. There is some light erosion in the bore, mostly in the grooves along the edges of the rifling.

Overall Condition: This pistol retains about 80% of its metal finish. The finish is thinning at all edges. There is some scattered light surface oxidation and spots of minor erosion, including a little under the grips at the front edges of the grip frame. There is finish wear on the top-right of the barrel where it looks like some light erosion was scrubbed out. There is light finish wear on the top of the slide in front of the rear sight. The grip areas and controls have handling wear where the oxidation is more visible. There are a few light nicks and scuffs. The action shows operational wear. The screw head is tool marked with a strong slot. The markings are generally clear, some are worn, but legible. Overall, this pistol is in Very Good condition.

Mechanics: The action functions correctly. It has a decocker safety on the left side of the slide. The slide is tight to the frame. We did not fire this pistol. As with all used firearms, a thorough cleaning may be necessary to meet your maintenance standards.

Our Assessment: The P.38 occupies a significant place in history. It was the first locked breech pistol to have a single action/double action trigger. After the start of WWII, Walther could not keep up with the production required, and production was ordered to commence at both Mauser and Spreewerke in 1940. By the end of the war, Walther had only produced about 580,000 of the 1.2 million produced. This is a quite special P.38, though. It was produced as part of the P.38s development, where the German Army was doing testing and making tweaks to the design before approving the pistol as the official sidearm. Referred to as the “Zero-Series”, this pistol is from the fourth and last developmental stage and is in the configuration which would eventually be standardized with a few minor differences. The grips are checkered instead of serrated and have a different shape for the lanyard ring cutout, the finish is a polished commercial blue instead of the later military dull blue and this example had red and white paint applied to its sights, a feature which would not see widespread adoption. There are also some markings differences, with a commercial Walther banner logo on the slide, eagle/359 waffenamts on most parts and a partial serial marking inside each grip. All of this pistol’s serialized parts match, including the grips and magazine, making it a wonderful example of a scarce pistol. Approximately 13,000 Zero-Series pistols were produced in total, with fewer than 10,000 in the 4th stage. Given what happened in Germany in the five years after this pistol was made, it is not difficult to imagine that far fewer remain today, and there can’t be many which have retained all of their original serialized parts. This pistol would be suitable for WWII or German sidearm collections, but will add to even an advanced collection which is focused on the HP and P.38. You could even enjoy taking it out to the range and putting it through its paces. Please see our photos and good luck!