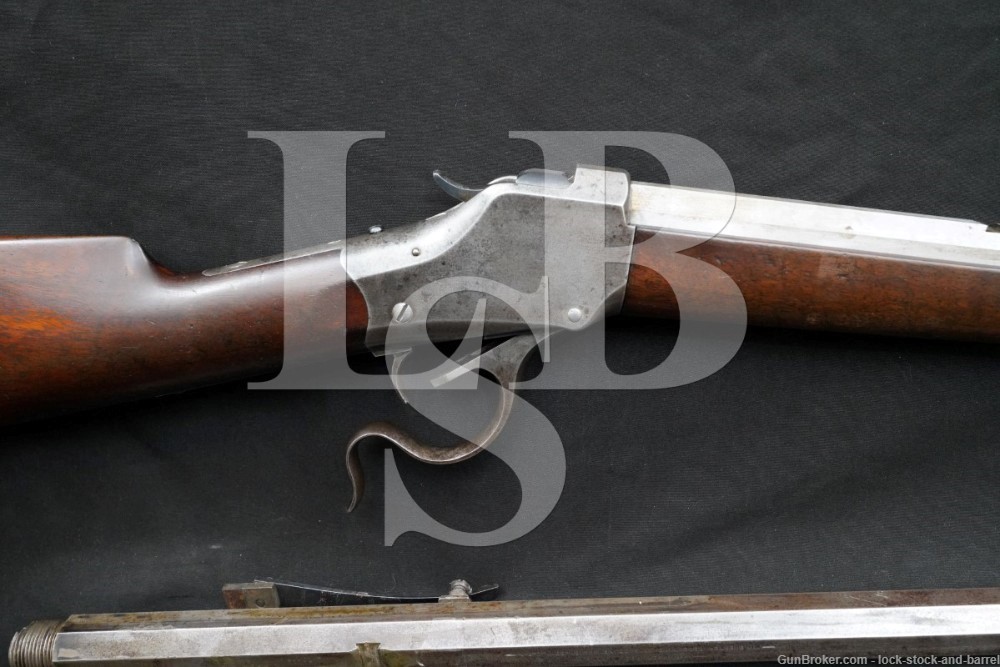 The top of the included barrel is marked “-MANUFACTURED BY THE-  / -WINCHESTER REPEATING ARMS CO. NEW HAVEN, CONN. U.S.A.-” in front of the rear sight dovetail and at the receiver with “CAL 38-55”. The bottom of the barrel is marked “VP” in oval and “.123” under the mainspring.

Sights / Optics: Each barrel has dovetails at the front and rear for iron sights, but none are present. The top tang is drilled, tapped and filled for a tang sight, none is present. The rear dovetail on the included barrel shows wear or modification.

Stock Configuration & Condition: The stocks are two-piece smooth walnut. The forend has a schnabel tip with ebony insert. The buttstock has a straight grip, straight comb and steel crescent buttplate. The forend has a crack at the right-front and another on the bottom-front across the front-left corner of the ebony insert. The buttstock has a repaired chip-loss in the bottom-front of the wrist on the left and a couple of very short, thin cracks at the rear of the top tang. The stocks have scattered nicks, dings, scuffs and scratches, most in the buttstock. The wrist has discoloration and thinning finish from handling. The LOP measures 13 1/8″ from the front of the trigger to the back of the buttplate. The plate has mostly worn to white with light wear at the heel and toe, and some scattered discoloration from oxidation. Overall, the stocks are in about Good-Very Good condition as Antique.

Type of Finish: The installed barrel is in the white, the receiver assembly is case colored and the included barrel is blued.

Finish Originality: Original to the parts, the installed barrel is not original to the receiver. We suspect that the breech-block is also a replacement.

Bore Condition: The installed barrel’s bore is bright with sharp rifling and no erosion. The chamber looks like it still needs some polishing.

The included barrel’s bore is dark gray with well defined rifling. It has scattered erosion and light pitting. The included barrel appears to have damage to its chamber. It was supplied with a fired case which is pretty obviously bulged out in the middle, but the casing still seats all the way into the chamber.

Overall Condition: This rifle retains about 5% of its metal finish. The receiver retains case color only on the interior. Exposed surfaces have muted, showing scattered discoloration from oxidation and a few light marks. The hammer and breech-block still retain fairly strong finish. The installed barrel has scattered minor surface oxidation. There is some machinist blue on the bottom flat toward the muzzle-end. The barrel has some scattered minor nicks, scuffs and scratches, these should come out when the barrel is finished. The screw heads range from sharp to tool marked with useable slots. The markings are generally clear, the serial number is marked fairly shallow, as was common in early production guns. Overall, this rifle is in about Good-plus condition as custom Antique.

The included barrel retains about 20% of its metal finish, nearly all in areas which would be covered by the forend when it was assembled. The other surfaces show scattered light oxidation and minor surface erosion, nicks, scuffs and scratches.

Mechanics: The mainspring is still mounted to the dovetail tenon in the included barrel, the forend screw tenon is also still installed in the included barrel. There appear to be other components missing as well, the trigger has a hole in the bottom-rear as for a set-trigger, but appears to be missing components of the set-trigger mechanism. We see nothing to indicate that the rifle will not function properly with correctly installed parts. We have not fired this rifle. As with all used firearms, a thorough cleaning may be necessary to meet your maintenance standards.

Box, Paperwork & Accessories: This rifle comes with the included barrel as described.

Our Assessment: When they were first manufactured, the John Browning designed Winchester Model 1885 rifles were deemed stronger than the prior Sharps rifles, and the different sight and trigger options available made them an instant hit with hunters and target shooters alike. The Model 1885 rifles were targeted at competitors in “Match Shooting”, a sport which was extremely popular from about 1871 to 1917. The Winchester rifles challenged the Sharps, Remington, Maynard and Ballard rifles, and quickly became known for their reliability and accuracy. Major Ned Roberts, inventor of the .257 Roberts cartridge, described the Model 1885 as “the most reliable, strongest and altogether best single shot rifle ever produced”. This example is a customized rifle which has been built on a very early action. The bottom tang’s serial number dates it to the first year of production, and is early enough that it John Browning himself may have still been in the factory helping to get all the tooling and production set up! The receiver has other early features such as the lack of a top tang marking, exposed sear-spring screw on the top tang, octagonal chamber ring, slab-side receiver and long-tang buttplate. It looks like the included barrel may be the original barrel, but it has a bulge in its chamber. A nearly-finished replacement barrel is installed which is already cut with dovetails for sights as well as the included forend and mainspring tenons. Once finished or restored, this old Winchester will make a nice addition to any collection. Please see our photos and good luck!