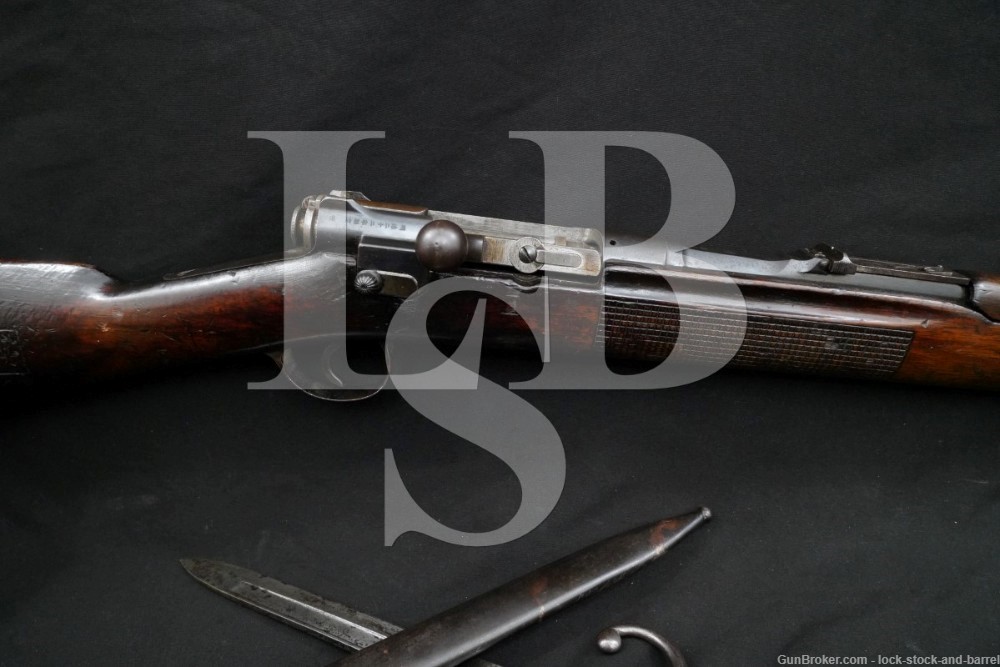 Stock Configuration & Condition: The hardwood stock has a straight grip, checkering, nosecap with bayonet lug, barrel band, 2 sling loops, and a metal buttplate with sliding metal door for storage in the butt. The buttplate & stock hardware show scratches, discoloration from oxidation, and light surface erosion. The wood shows numerous scrapes, scratches, and compression marks. Several have damaged or removed small areas of the surface wood. The left side of the checkering shows damage. Most of these marks have been oiled over. The LOP measures 13 inches from the front of the trigger to the back of the buttplate. The stock rates in about Very Good overall condition as an antique.

Finish Originality: Original. The barrel has been treated with cold blue.

Bore Condition: The bore is grey and the rifling is deep. There is erosion in the bore; more prominent in the grooves and near the muzzle.

Overall Condition: This rifle retains about 25% of its current metal finish. The barrel has been treated with cold blue. Surface erosion is bleeding through the cold blue. The metal shows scrapes, scratches, discoloration from oxidation, and surface erosion. The screw heads show heavy use and oxidation. The markings are faded. Overall, this rifle rates in about Good condition as an antique.

Mechanics: This rifle was made without a safety. The action functions correctly. We have not fired this rifle. As with all previously owned firearms, a thorough cleaning may be necessary to meet your maintenance standards.
The magazine cutoff functions and the magazine follower is still under tension.
The bayonet mounts the rifle properly. The scabbard loosely fits the bayonet.

Box, Paperwork & Accessories: The rifle comes with a Second Version (Type B) Type 22 Murata Bayonet  (page 30 of Larry Johnson’s book, Japanese Bayonets…1870 to the Present) and a Czechslovakian VZ-22 replacement scabbard. The bayonet metal shows discoloration and surface erosion. The wood on the handle shows scratches. The bayonet is in about Fair to Good condition as an antique. The scabbard shows scrapes, scratches and surface erosion. The scabbard is in about Good condition. A cleaning rod is stored in the butt. It shows scrapes & oxidation. It is in about Very Good condition.