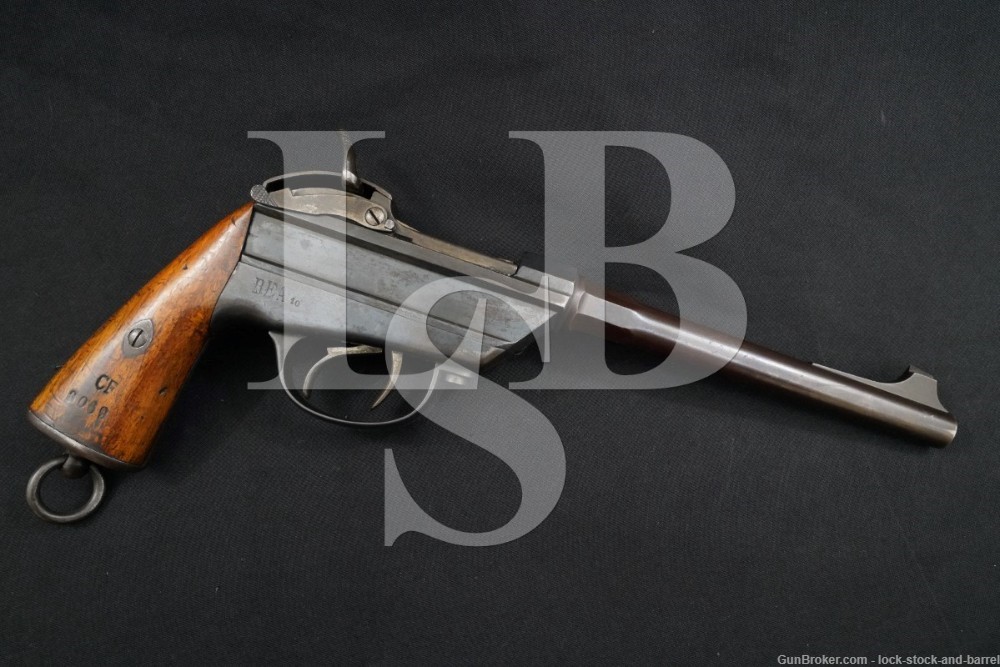 Sights/ Optics: The front sight is a blade fixed to a ramp at the muzzle end of the barrel. The rear sight is a “V”-notch fixed in a channel on the rear end of the frame.

Stock Configuration & Condition/ Grip: The grip panels are two-piece smooth wood. The butt-strap features a lanyard ring (no lanyard is included). The grip panels have some scratches, compressions, nicks and handling marks. There are no cracks or chips. Overall, the grip panels are in Very Good condition for Antiques.

Bore Condition: The bore is mostly bright with sharp rifling. There is some minor erosion in the bore.

Overall Condition: The pistol retains about 40% of its metal finish. The barrel is coated in oxidation and has taken a patina color. The frame is coated in mild surface oxidation but retains most of its original bluing. There are some scratches, nicks, scuffs and handling marks. Notably, there is finish loss at the muzzle and along most of the leading edges. The markings remain clear. The screwheads are serviceable. Overall, the pistol is in Very Good condition for an Antique.

Mechanics: The action functions correctly. There appear to be two “triggers,” but the front “trigger” is really a lever that operates the action while the rear trigger acts normally. There is a safety on the right side of the frame which can be used to block the hammer from being cocked. We did not fire this pistol. As with all previously owned firearms, a thorough cleaning may be necessary to meet your maintenance standards.

Our Assessment: This Werder Model 1869 “Lightning Pistol” is a single-shot falling block pistol that is chambered for 11.5mm centerfire cartridges. The gun was designed by Johann Ludwig Werder and it was one of the first centerfire weapons to be adopted by a European military, in this case the Kingdom of Bavaria. Prussia under the leadership of Otto von Bismark became the dominant power in continental Europe in the late 19th century, this led to a struggle for influence with France which culminated in the Franco-Prussian War in 1870. The perceived French aggression united the four principal German states of Baden, Wurttemberg, Bavaria and Hesse-Darmstadt; the alliance defeated the French. Following the victory, Bismark orchestrated the unification of the four states into Germany; the country would remain largely under Prussian domination until the end of WWI. Bavaria for its part was largely autonomous and maintained its own military until the German Empire collapsed in 1918.  The Werder “lightning” pistols were rather impractical and there is some debate over how much if any operational service they saw during the conflict, but it is clear they were quickly retired following the Franco-Prussian War. The pistol is a unique design and it remains mechanically sound. This is one Antique pistol you do not want to miss out on!