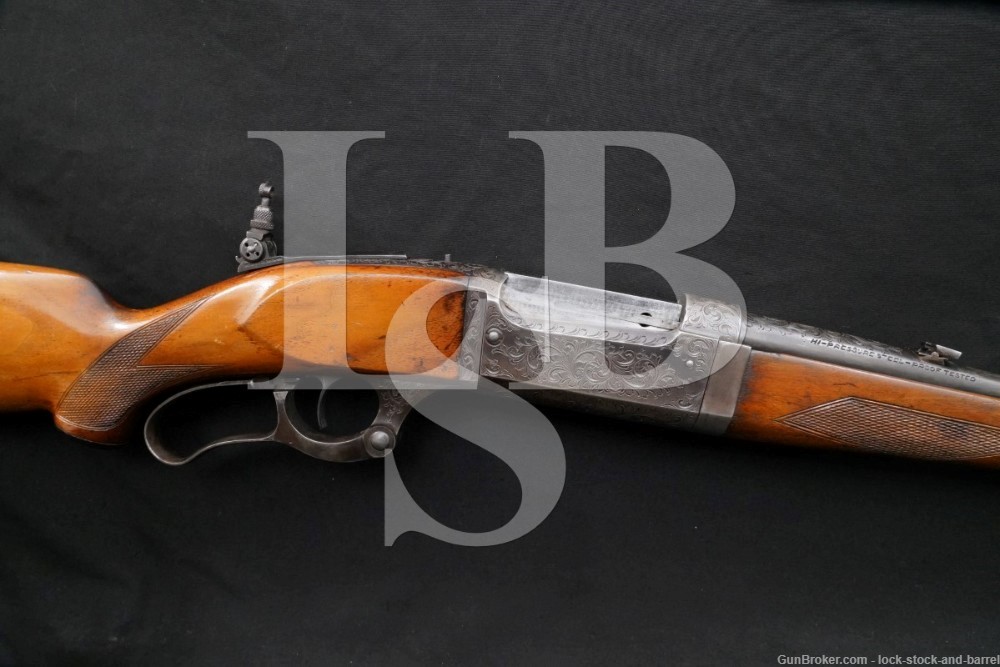 Action Type: Lever Action with Rotary Magazine. This is a takedown model.

Sights / Optics: The front sight is a beaded blade pinned into a machined base that is integral to the barrel. The rear sight is “U” notched flip-up sight dovetailed into the barrel. The top tang has a factory pair of drilled, tapped, and filled holes that are installed with a Marbles flip-up aperture peep sight.

Stock Configuration & Condition: The stocks are checkered wood with a pistol grip, straight comb, schnabel tip forend, and a shotgun-style metal buttplate. There is an inlaid bone diamond on the right side of the buttstock. There are four little notches on the left side of the wrist. There is a crack on the top of the wrist at the tang. There is a split in the grain on the right side of the stock. Each side of the wrist has a thin crack at the receiver. There are some scattered draglines, compressions, scratches, and scuffs. There are patches of finish loss and areas of weathered finish. There is discoloration where the wood and metal meet. There is a crack on the nose of the forend. The checkering has a few scrapes and compressions but is mostly strong. The LOP is approximately 13” from the front of the trigger to the back of the buttplate. The serrated plate has some spots of oxidation, mottled discoloration, and some scuffs. The stocks rate in about Good-Very Good condition.

Bore Condition: The bore is gray with mostly sharp rifling. There is scattered erosion in the bore.

Overall Condition: This rifle retains about 65% of its metal finish. There is mottled thinning, discoloration, and finish loss. The barrel has a few spots of pinprick erosion. There are some areas of discoloration from previous oxidation, the most noticeable are on the bolt. The lever has mottled thinning and some case color can be seen under the thinned finish. The screwheads show use with serviceable slots. The markings are mostly clear though some are a bit light. Overall, this rifle rates in about Very Good condition.

Our Assessment: The Savage 1899/99 model rifles have quite a history. They were preceded by the Model 1895, which was the first hammerless lever-action rifle produced. A hammerless action was useful as it reduces the lock time, allows the rifle to be fired more accurately and is less likely to jam in brush or snag in clothing. The 1895 and 1899/99 models used a rotary magazine to hold the cartridges, using a spring-loaded spool with grooves. The 1899/99 models added a counter to the spool to indicate how many rounds are loaded. This design allowed the use of spitzer bullets, which could not be used in the Winchester rifles of the times because the pointed tips in the tubular magazines could cause accidental discharge. This gave Savage a lead in producing rifles that could handle high-velocity smokeless powder cartridges with bullets offering flatter trajectories than other lever-action designs. This is a Model 99-G Deluxe takedown with a checkered pistol grip stock and a Schnabel tipped forend. The rifle has a 24” barrel and comes with iron sights. This one has beautiful engraving and will be a welcome addition to a C&R or lever-action rifle collection! Please see our photos and good luck!