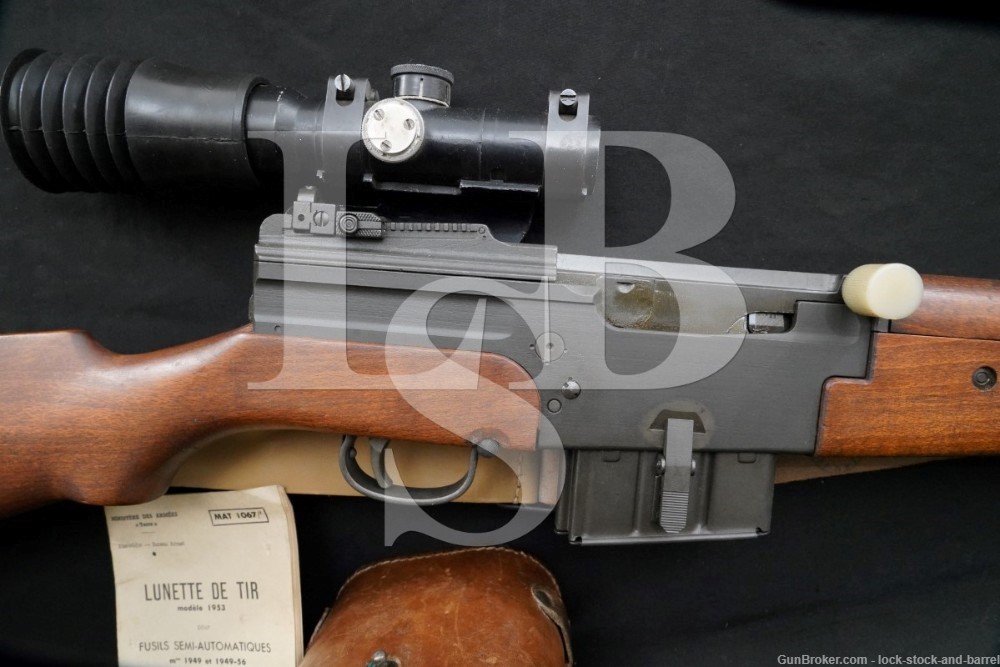 Action Type: Semi-Automatic with Detachable Magazine. The front of the bolt body has an integral stripper clip guide for loading the magazine while inserted.

Sights/Optics: The front sight is a tall post, set between two protective ears. The rear sight is an aperture attached to a sliding escalator. A screw on the right rear allows for adjustment for windage. It is marked from “2-12”. The left side of the receiver has a scope rail machined into it. The grenade launcher has been removed. The oversized knurled screw at the front of the grenade launcher sight is for adjusting the missing grenade launcher. Mounted to the left side of the receiver is APX scope with light wear throughout, the glass is fairly clear, and overall, the scope rates in Very Good condition.

Stock Configuration and Condition: The hardwood stock has a semi-pistol grip, finger grooves, metal nosecap, barrel band with sling ring, sling bar, sling well, and a metal buttplate. The wood has scattered light nicks and dings which have for the most part been oiled over. The LOP measures 13” from the front of the trigger to the back of the buttplate. The plate is largely free of wear, just a bit of scuffing at the heel and toe. Overall, the stock rates in Good-to-Very Good condition.

Bore Condition: The bore is semi-bright, and the rifling is well-defined. There is no erosion, but light stubborn fouling persists throughout.

Overall Condition: This rifle retains about 95% of its metal finish. While the action has visible light operational wear, the metal surfaces are mostly free of any additional wear. A few light scuffs mark the top of the barrel. The screw heads show use but slots are usable. The markings are clear. Overall, this rifle rates in Very Good condition.

Box, Paperwork, and Accessories: The scope as described above and a case for it, which includes a manual.

Our Assessment: This French MAS MLE 1949 is a scarce French Military Rifle as only around 20,000 were made. This example is notable for being the Sniper configuration with no provision for a bayonet and a scope mounted on the receiver. This one looks great and has a decent bore that can still put a ton of lead down range. The rifle comes with a spiked bayonet and a 10 round magazine attached. The grenade launcher has been removed. Good luck and happy bidding!