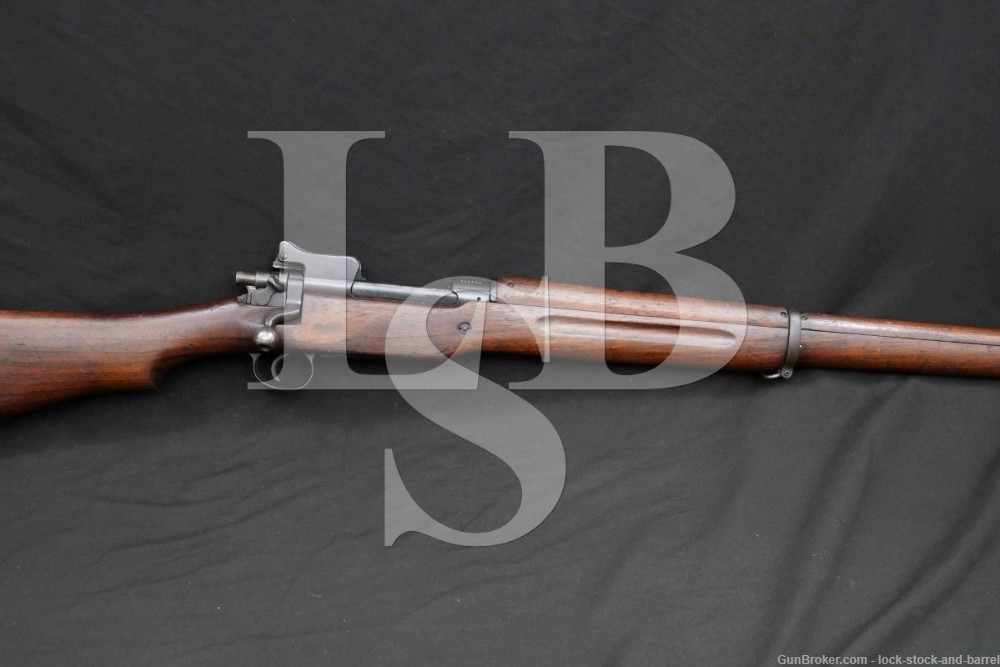 Markings: There is no visible import mark. The top of the receiver is marked “U.S. / MODEL OF 1917 / WINCHESTER / 261594”. The front of the Winchester barrel is marked “W / flaming bomb / 4 – 18”. The left side of the receiver and top of the bolt handle are both marked with partial Ordnance Department “flaming bomb” proofs. The top left of the receiver (twice), safety (twice), bottom metal, top of the buttplate (faded), and left side if the cocking indicator are all marked with “eagle’s head” inspection stamps. The nose of the stock (large), top of the rear sight base, safety, bolt release lever, and bottom of the bolt handle are each marked “E” for Eddystone. The front sight and front sight base are marked “W” for Winchester. The bottom of the grip is marked with a “circled P” proof overstamped by “3”. The left side of the stock, above the trigger, is marked “OGEK in a rectangle” which is an Arsenal Rebuild mark from the Ogden Arsenal. There are a few other small marks on the rifle.

Stock Configuration & Condition: The hardwood stock has a straight grip, finger grooves, nosecap with bayonet lug, stacking loop, 2 sling loops, through bolt and a metal buttplate with a hinged door for storage. The buttplate shows several small scratches, light surface erosion, and a brown patina. The wood shows numerous scrapes, scratches & compression marks. Many have damaged portions of the surface wood. The LOP measures 13 ½ inches from the front of the trigger to the back of the buttplate. The stock rates in about Very Good overall condition.

Bore Condition: The bore is grey and the rifling is deep. There is erosion in the bore; more prominent in the grooves. There is some light intermittent pitting in the grooves near the muzzle. The bore shows an M.E. of 1.9.

Overall Condition: This rifle retains about 94% of its metal finish as refinished. The front of the barrel and front sight show scrapes & scratches. The bottom metal shows scrapes, scratches, thinning, and discoloration from oxidation. The receiver shows light handling marks. The screw heads show heavy use. Many of the markings are deep. Some of the small stampings are faded due to refinishing. Overall, this rifle rates in about Very Good Plus condition as refinished.

Our Assessment: This Winchester Model 1917 is in nice shape for being over 100 years old. It has been refinished & rebuilt so it uses a mix of WInchester and Eddystone parts. This is an attractive rifle that can still put a lot of lead down range. It has nice  markings on the metal including “flaming bombs” and “eagle heads” that add to the historical value of the rifle.