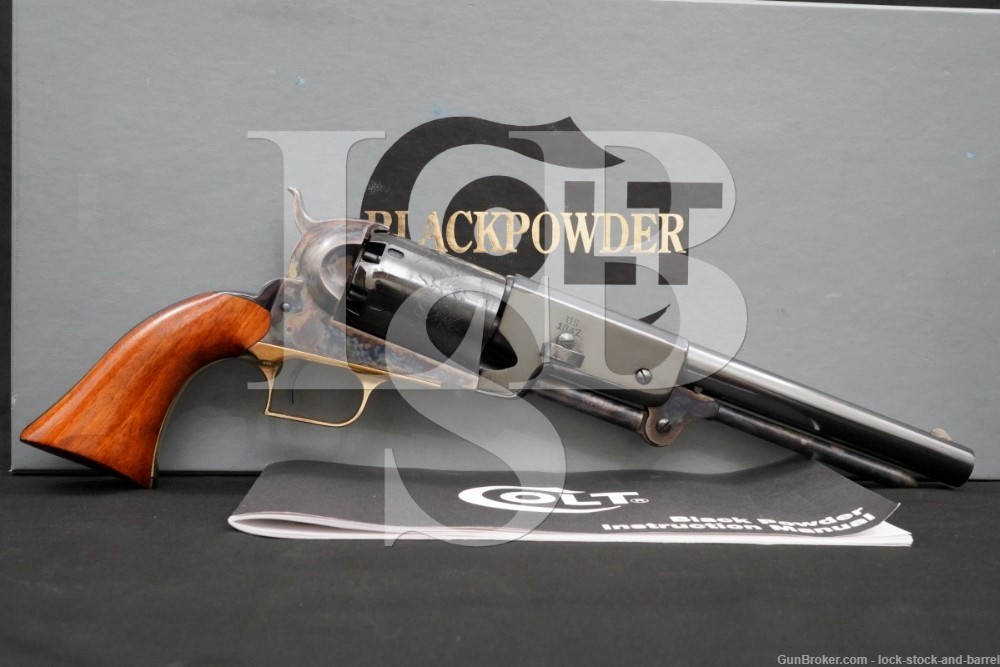 Sights/ Optics: The front sight is a brass blade fixed to the muzzle end of the barrel. The rear sight is a “V”-notch integral to the hammer which can be used when the hammer is cocked.

Stock Configuration & Condition/ Grip: The grip is one-piece smooth wood. The grip has some light handling marks but lacks any notable defects. There are no chips or cracks. Overall, the grip is in Excellent condition.

Overall Condition: The revolver retains about 98% of its metal finish. There are some light handling and storage marks but the revolver lacks any notable defects. The markings are clear. The screwheads are serviceable. Overall, the revolver is in Fine-Excellent condition.

Mechanics: The action functions correctly. The single-action trigger is crisp. The cylinder locks with barely perceptible play on each chamber. We did not fire this revolver. As with all previously owned firearms, a thorough cleaning may be necessary to meet your maintenance standards.

Box Paperwork and Accessories: The revolver comes with a Colt box and a user manual. The box has some light handling marks but remains in Fine condition.

Our Assessment: This is a modern Colt manufactured replica of the company’s model 1847 Walker, which is a .44 caliber single-action percussion revolver. The model 1847 was introduced just in time for the Mexican American War, ironically the man whom the gun was named after, Samuel Hamilton Walker, carried two of these revolvers with him into battle during the Mexican American War. Unfortunately, he was killed in action during the conflict, the very year his namesake revolver was introduced. This replica Colt Walker is beautifully crafted with an epic battle scene on the cylinder and Samuel Colt’s signature on the backstrap. The revolver remains mechanically sound. It should prove a worthy addition to any collection, especially if you’re from the Lone Star State. Just this past May, Governor Abbott signed a Resolution making the 1847 Walker the official handgun of the State of Texas. Good luck on your bid!