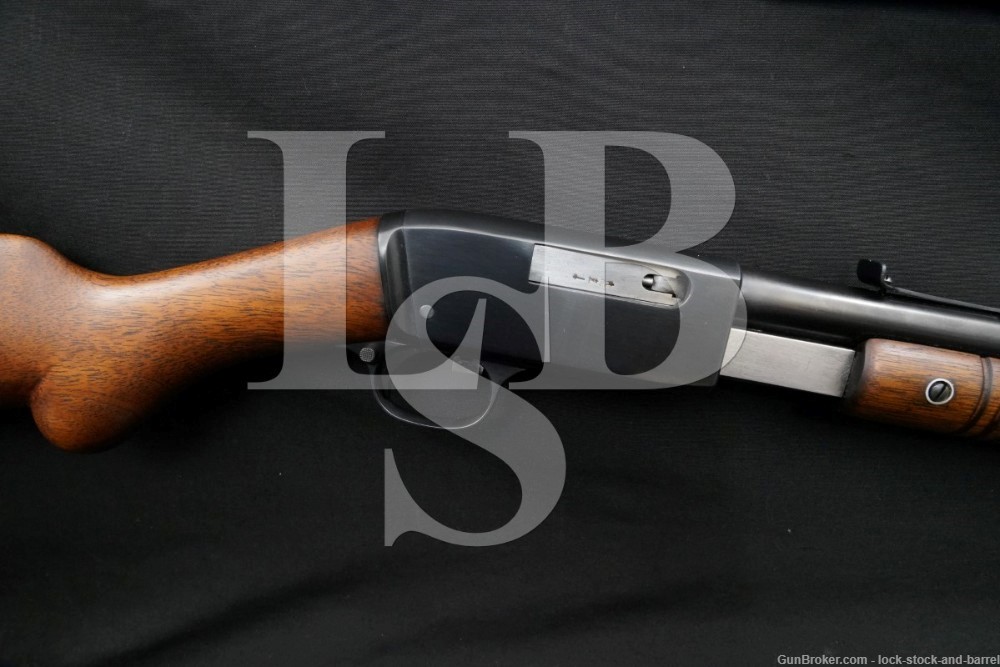 Stock Configuration and Condition: Two-piece walnut with grooved forend, semi-pistol grip, straight comb, and a sheet steel buttplate. Scant few minor dark marks dot the wood, most notably on the right side of the buttstock and underside of the forend. All of these marks have been oiled over. The LOP measures 13 1/4” from the front of the trigger to the back of the buttplate. The buttplate is slightly proud to the frame and has scattered minor nicks and scuffs. Overall, the stocks rate in Fine condition.

Bore Condition: The bore is mostly bright with well-defined rifling. There is no erosion, but there is minor stubborn fouling throughout.

Overall Condition: This rifle retains about 97% of its metal finish. Hansling wear is evident on many surfaces. Bothe barrel and the receiver have only scattered minor scuffs. The action and magazine tube have light operational wear. The screw heads are sharp and the markings are clear. Overall, this rifle rates in Fine-to-Excellent condition.

Mechanics: The action functions correctly. The slide release is located in front of the trigger and the safety is a cross-bolt through the back of the trigger guard. The magazine tube moves with the slide as it is opened and closed. The action comes apart easily with a serrated screw on the left side of the receiver. We have not fired this rifle. As with all used firearms, thorough cleaning may be necessary to meet your maintenance standards.

Our Assessment: FN and Remington both produced pump action gallery-type rifles based on John Browning’s patent. FN produced its .22 Pump-Action Repeater in Europe between 1922 and 1974 and Remington manufactured their Model 12 and 121 rifles between 1909 and 1954, so apparently there was an agreement between them that the FN produced models would not be exported into the United States (though they were available in Canada). Because of its slide action, with the magazine tube moving with the slide, the FN design was nicknamed “The Trombone”. About 150,000 were manufactured between 1922 and 1974, and this example is quite early-days, manufactured sometime between 1923 and 1924. Given this rifle’s age, it is in incredible condition (a wise being once said, “When [99] years old you reach, look as good you will not.”) The rifle is in Fine-to-Excellent condition with about 97% of its original finish remaining. The Trombone is somewhat rare in the United States, and most seen here were brought in from Canada. For that reason, they don’t have much of a following, but this rifle is so well preserved, we believe collectors will certainly be interested. Good luck and happy bidding!