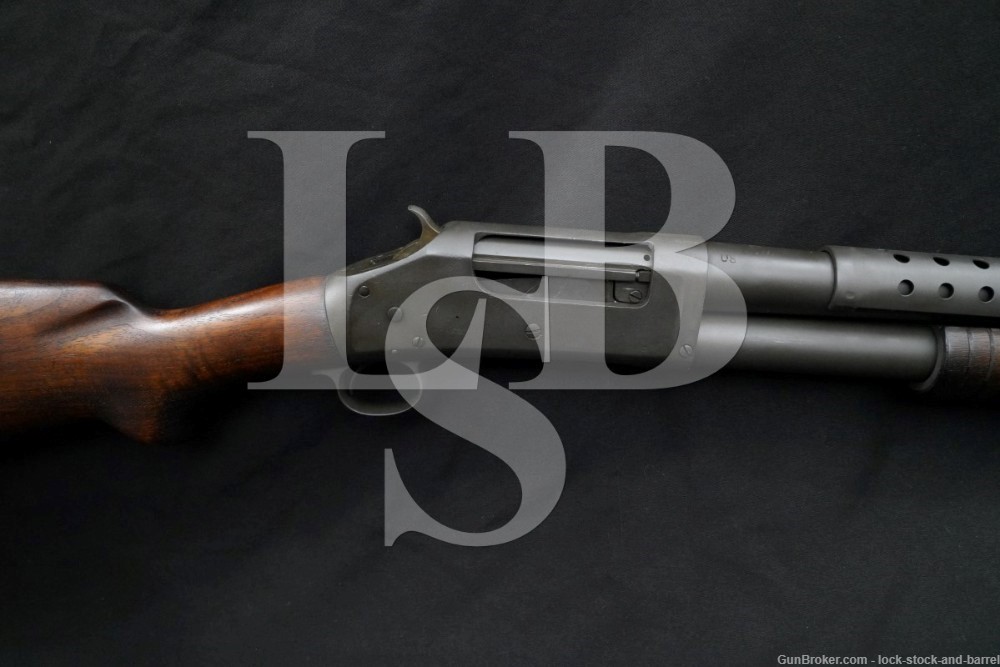 Sights / Optics: The front sight is a large brass bead set on the top-front of the bayonet lug. Under the lug, the barrel is drilled for a bead.

Stock Configuration & Condition: The stocks are walnut, the slide handle is grooved and the buttstock has a pistol grip, straight comb and checkered steel buttplate. There is a sling plate inlet to the belly with the other sling swivel mounted to the bayonet lug. There are some little nicks, dings and light scratches. The wrist is notably shy to the rear of the trigger guard. There are no chips or cracks. The LOP measures 13 1/2” from the front of the trigger to the back of the checkered hard rubber Winchester butt plate. The plate has strong finish with some light erosion under the finish and well defined checkering. The stocks rate in about Very Good-Fine overall condition as not original to the gun.

Bore Condition: The bore is bright. There is no erosion in the bore but there are a couple of minor dents which are barely visible in the bore.

Overall Condition: This shotgun retains about 97% of its metal finish. The finish is strong throughout with only a few scattered minor marks and faint operational wear through the finish. There are scattered nicks and scratches under the finish, mostly in the receiver. There is scattered erosion under the finish, most notable in the bayonet lug and receiver. The screw heads range from sharp to tool marked with serviceable slots. The markings are a mix of soft and sharp. Overall, this shotgun rates in about Very Good condition as refinished and assembled.

Mechanics: The action functions properly. This shotgun will slam-fire as designed. We have not fired this shotgun. As with all used firearms, a thorough cleaning may be necessary to meet your maintenance standards.

Our Assessment: After observing the Great War for the first three years, it became clear to the U.S. that serious close-range firepower was needed in trench warfare. The Model 1897 Trench grade was an evolution of this idea. The pre-existing Winchester Model 1897 was modified by adding a perforated steel heat shield over the barrel which protected the hand of the user from the barrel when it became over-heated, and an adapter with bayonet lug for affixing an M1917 bayonet. They were so effective and brutal in combat that the German high command once announced they would execute any US soldier captured with one in his possession. This shotgun was not originally a trench gun but was put into this configuration by an enthusiast. It was built on a solid-frame receiver and given a parkerized finish as well as US military-style markings. This is a nice military-style 97 that will be tons of fun to shoot at the range. Please see our photos and good luck!