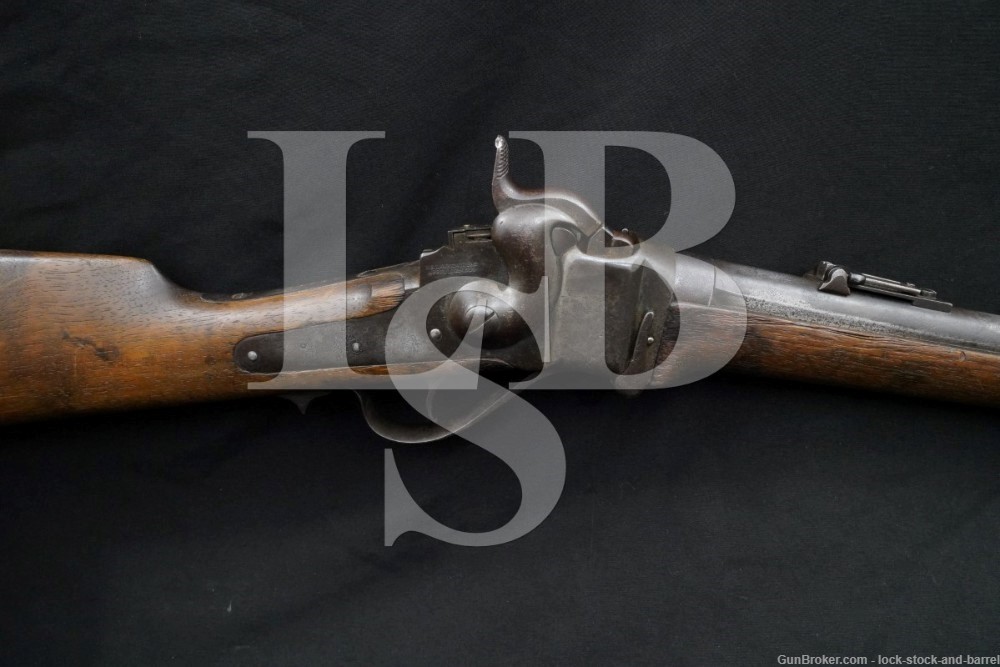 Stock Configuration & Condition: The stocks are two-piece walnut with a straight grip and steel crescent shaped buttplate. The forend is approximately 10” in length and is held with a single barrel band. There’s a hole on the right side of the buttstock that appears to have been filled with some kind of adhesive. There is material loss at the toe around the plate. There is a long thin split in the right side of the buttstock as well. There are also several scratches, gashes, and dings throughout the wood. There is a split in the left side of the wrist. There is a small chip on the left bottom rear of the forearm. The LOP measures 13 7/8” from the front of the trigger to the back of the buttplate. The buttplate shows finish loss, moderate wear at the heel, multiple tiny dings and dark erosion. The stocks are in about Good-Plus overall condition as Antique.

Type of Finish: The barrel is blued. The receiver, lever, hammer and lockplate are case colored.

Bore Condition: The bore is dark with scattered erosion and pitting throughout. The rifling is visible.

Overall Condition: This rifle retains about 2% of its current metal finish. The barrel shows a dark patina with streaks of loss, likely from abrasive cleaning over erosion. The barrel band shows a deep dark patina. There is erosion and pitting throughout the receiver, lever, and hammer. There are some scattered dings on the barrel and light scratches throughout. Most of the screw heads are sharp, with a few showing light marks from a screwdriver. Many of the markings are almost completely faded, including on the top rear of the barrel and the left side of the receiver. Overall, this rifle rates in about Good condition as Antique.

Mechanics: The action functions correctly. The hammer has a half-cock safety position. There is a push-button lever lock on the lower tang. The action is tight, and the lever stays “UP” with the hammer cocked and the rifle held in a horizontal position. We have not fired this rifle. As with all used firearms, a thorough cleaning may be necessary to meet your maintenance standards.

Box, Paperwork & Accessories: This carbine has a sling bar on the left side of the rifle, which includes its saddle ring.

Our Assessment: The Sharps New Model rifles and carbines were made in three models: 1859, 1863 and 1865. From Flayderman’s, over 100,000 of the 1859 and 1863 models were purchased by the U.S. Army and Navy during the Civil War. The Sharps carbine was the most significantly utilized carbine of the Civil War: it was a single shot percussion breech loader using paper cartridges and revolutionized hand weaponry at the time. After the war, a little over 31,000 carbines were converted to fire centerfire ammunition. This rifle is a New Model 1863 carbine that has been converted to centerfire. This carbine is in about Good condition with only about 2% of its original finish remaining. The action is tight and functions correctly. The Sharps rifles and carbines represent a great period in the history of American firearms – they participated in the last great war in which percussion rifles were used, and their post-war conversions were among the first rifles to use metallic cartridges. These rifles are highly collected, primarily because there are so few still remaining. This carbine will be no exception. Please see our photos and good luck!