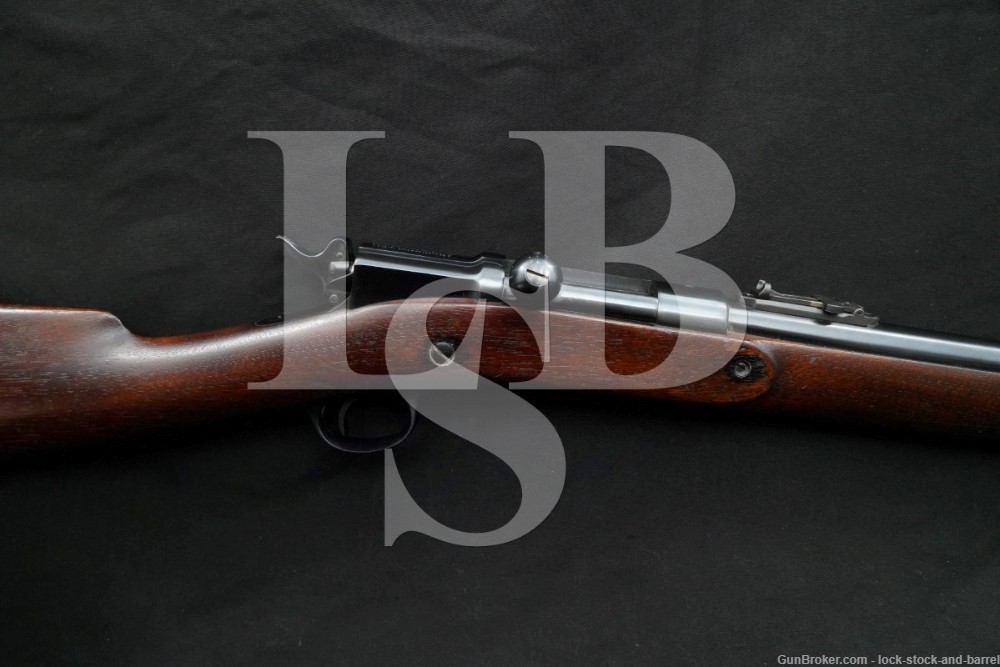 Sights / Optics: The front sight is a replacement Lyman beaded blade dovetailed into a barrel band at the front of the barrel. The rear sight is a two-position flip-up ladder sight. There is a “V” notch when down and a small “U” notch on the slider.

Stock Configuration & Condition: The stock is one-piece walnut with a straight grip, a straight comb, and a metal buttplate with a hinged door for storage. There are some compressions, scuffs, dings through the finish, and scratches. Some of the most noticeable marks are on the left side at the action and right side of the forend but have darkened with age. There are no chips or cracks. The LOP measures approximately 13 1/4” from the front of the trigger to the rear of the smooth metal buttplate. The metal buttplate has been refinished and has a few light scuffs plus a few little spots of light erosion under the finish. The stock rates in about Very Good overall condition.

Bore Condition: The bore is dark and the rifling is sharp where not interrupted by erosion. There is scattered erosion with a few patches of pitting.

Overall Condition: This rifle retains about 96% of its metal finish. There is some light mottled discoloration and little spots of light oxidation on the left side of the barrel at the front. There are a few spots of finish loss on the bolt handle. There are a few scattered little nicks and light marks through the finish. There is a lever on the left of the receiver, it is a single shot cutoff but does not function correctly. The screw heads are lightly worn with strong serviceable slots. The markings are clear. Overall, this rifle rates in about Very Good condition.

Mechanics: The single-shot cutoff does not function but the action otherwise functions correctly. We have not fired this rifle. As with all used firearms, a thorough cleaning may be necessary to meet your maintenance standards.

Our Assessment: This is a Remington-Keene Sporting rifle, Remington’s first production bolt action. At the time of its invention, the lever-action and single-shot dominated the market with a few bolt actions entering the fray, but they were single-shot designs. The inventor John W. Keene had been awarded patents for a rifle that would feed from a magazine tube but did not have mass production capabilities. This resulted in a mutually beneficial relationship for him and the Remington company and thus the Remington-Keene rifle was born. The magazine tube was similar to the lever actions of the time and the manually coked action was similar to a musket so it was not hard to transition shooters accustomed to their older rifles. The Navy made a purchase for some of the rifles and the U.S. Interior Department purchased some for Indian Tribal police but sales to the Government were not what Remington had hoped and they soon started marketing sporting rifles like this one. The production numbers were about 5,000 and these don’t come up often, don’t pass this one up. Please see our photos and good luck!