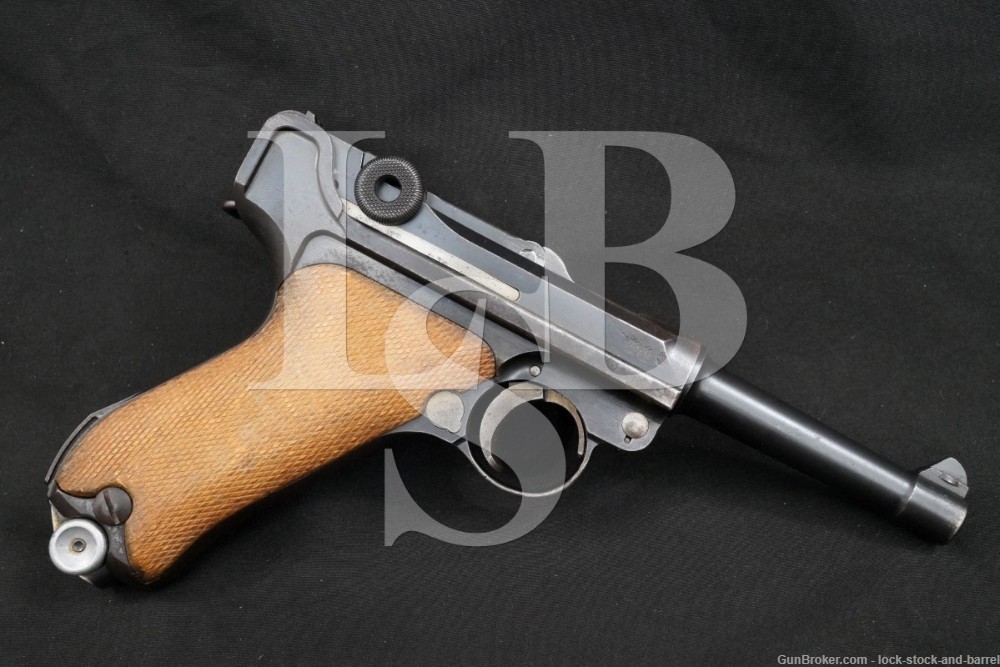 Stock Configuration & Condition: The grips are two-piece checkered wood panels. The grips show handling wear with some spots of discoloration, mostly around the edges. There are a few light nicks and scuffs. The grips may have seen some minor sanding, the checkering is slightly smoothed, but the lines are clearly visible and some areas are well defined. There are no chips or cracks. Overall, the grips are in about Very Good condition as likely not original to the gun.

Bore Condition: The lands are mostly bright, the grooves are light gray. The rifling is sharp. There is some minor erosion, mostly in the grooves.

Overall Condition: This pistol retains about 70% of its metal finish. The finish is thinning at all edges. The most notable finish wear is in the grip areas. There is finish wear on each side of the barrel band, on the chamber ring, the breech-bolt, the raised portion of the sideplate and the right frame rail. The worn areas show discoloration from oxidation and there is some other scattered minor surface oxidation. There is some surface erosion on the frame under the grip panels. There are some scattered light nicks, scuffs and scratches. The action shows operational wear. The screw heads are tool marked with strong slots. The markings are generally clear, some inspection markings are poorly struck. Overall, this pistol is in Very Good condition.

Our Assessment: The Luger (Pistole Parabellum or P-08) is perhaps the most aesthetically and ergonomically pleasing of all autoloading centerfire pistols. It is also one of the strongest, most accurate and most recognizable service pistols ever made. Georg Luger developed his famous pistol in 1898-1899 (starting with the Borchardt/Luger transitional pistol). The Luger is, essentially, a much improved Borchardt type pistol, which was itself based on the toggle action concept used by Sir Hiram Maxim in the world’s first practical machine gun. The Luger was so well liked and reliable that it was still being made and issued to German troops well after the P38 was adopted by the army. This is an inter-war Army Luger made by DWM in 1921. After the end of the Great War, severe restrictions were placed upon the German arms industry and military via the Versailles Treaty. Many Imperial-era Lugers were retained and re-worked. Production at DWM started back up in 1920 with five-digit serial numbers applied and in 1921 letter suffixes were resumed for the serial markings, leading to these pistols now being referred to as the “alphabet DWM” pistols by collectors. This pistol is in fairly good shape considering the times it saw, surviving the period of hyperinflation in the early 1920s, the Great Depression, the creation and rise of the Nazi party, the establishment and destruction of the Third Reich. It retains matching serialized parts, though the grips appear to be replacements and the magazine is of later production. It still has a fairly nice bore and strong mechanics. This will make a nice addition to a Luger collection missing an inter-war alphabet Army Luger. Please see our photos and good luck!