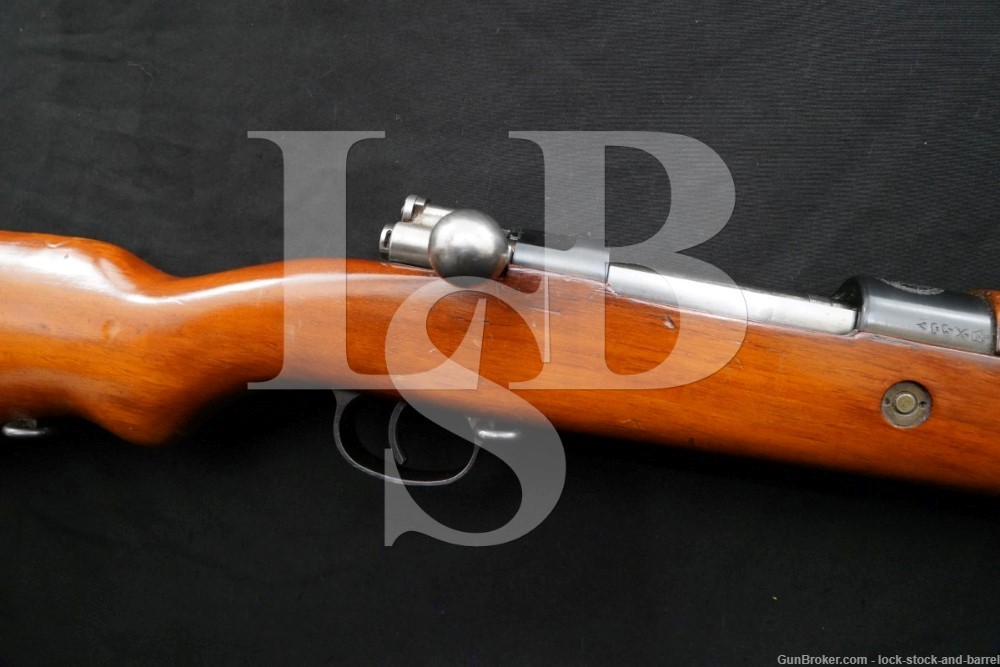 Markings: There is no visible import mark. The markings are in Farsi. Translation and information is taken from pages 240-245 of Joe Puleo’s book, Bolt Action Military Rifles of the World.
The top of the receiver is marked with the Persian crest “crown / sun / lion holding a sword”. The left side of the receiver is marked with the Persian serial number in “Arabic numbers” followed by an Arabic “letter” and, “Rifle Model 1309 BRNO Arms Factory”. The Iranian year “1309” corresponds to the Western model year of 1929, as this is a 1929 contract rifle. The right side of the receiver and the underside of the bolt handle knob are both stamped with Persian acceptance marks. The top of the bolt handle and right side of the buttstock are marked with the Persian serial  in “Arabic numbers” number followed by an Arabic “letter”. The right side of the buttstock is also marked “Infantry”. The bottom of the bolt handle is marked “D8” and with a Czech “circled Z” proof.

Stock Configuration & Condition: The two piece hardwood stock has a pistol grip, finger grooves, metal nose cap with bayonet lug, hole for the included cleaning rod, stacking loop, barrel band, 2 sling loops, through bolt, marking disk on the butt, and a metal buttplate. The buttplate shows small scratches and surface erosion. The wood shows several scrapes, scratches & compression marks. Some have damaged small portions of the surface wood. Most of these marks have been oiled over. The LOP measures 13 ? inches from the front of the trigger to the back of the buttplate. The stock rates in about Very Good Plus overall condition.

Overall Condition: This rifle retains about 97% of its metal finish. The barrel and the receiver have been treated with cold blue. The top of the barrel shows an area of thinning & discoloration. The top of the receiver shows light discoloration. The top rear of the receiver shows scratches. The front of the barrel and trigger guard show scrapes.  The metal shows other scuffs & light handling marks. The screw heads show moderate use. The markings are deep & crisp. Overall, this rifle rates in about Very Good Plus to Fine condition.

Our Assessment: This Persian Model 98/29 Long Rifle looks great. It has a strong bright bore as well as nice deep markings on the metal & wood. The markings include a large crisp Persian crest on the receiver. The original serial number is in Arabic. The Arabic symbols for the serial number on the receiver, bolt handle, and stock are matching.
The rifle was made by the Czechs at their famous Brno factory between 1931 and 1938. The orders for these Mausers were not completed as the Nazis took over Czechoslovakia prior to all rifles being made. The Czech made Persian Model 98/29 Long Rifle is considered to be one of the best Military Mausers ever made. This will add to your Military collection.
For more information see pages 280-282 of Robert Ball’s book, Mauser Military Rifles of the World 5th Edition or pages 240-245 of Joe Puleo’s, Bolt Action Military Rifles of the World.