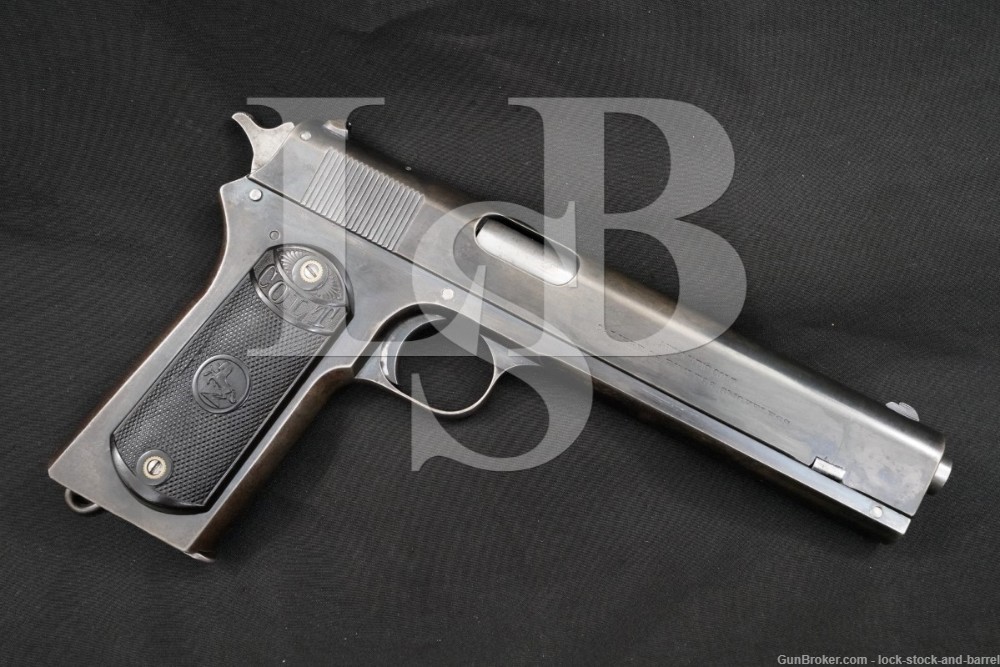 Markings: The left side of the slide is marked “PATENTED / APR. 20, 1897. SEPT. 9, 1902”, “COLT’S PT. F.A. MFG. CO. / HARTFORD, CT. U.S.A.”, and at the rear with the Rampant Colt logo. The left side of the frame is marked “39564”. The right side of the slide is marked “AUTOMATIC COLT / CALIBRE 38 RIMLESS SMOKELESS”. The left of the trigger guard is marked with a “VP” in a triangle and “1”. The bottom of the slide is marked “033 / 564” at the rear. This appears to be the result of force-matching. This pistol was produced during the transition period where some slides were marked with the last three digits of the serial number and some had the full serial number marked. Other slides we have seen with the full serial marking were marked on the flat behind the breech-face. Other slides we have seen with a partial serial number were marked at the bottom-rear as seen on this slide.

Stock Configuration & Condition: The grips are checkered black hard rubber with “COLT” in a banner across the tops of the grips and a circled Rampant Colt logo in the center of the grips. The grips show light handling wear with a few scattered light nicks and scuffs. There are some light tool marks around the screw heads. The checkering and lettering are well defined with good detail on the rampant colts. There are no chips or cracks. Overall, the grips are in Very Good condition.

Finish Originality: Some remaining finish is Original to the parts, worn areas show treatment with cold blue. As noted in the Markings section, the slide may not be original to the frame.

Bore Condition: The bore is semi-bright with sharp rifling. There is some scattered light erosion in the bore, mostly in the grooves along the edges of the lands.

Overall Condition: This handgun retains about 65% of its metal finish. The finish is thinning at all edges. There is scattered finish wear, most in the top and left of the slide and the grip areas of the frame. The worn areas show old treatment with cold blue. Three are some spots of minor erosion on the frame around the grips and the grip areas have some minor surface oxidation. Most worn areas show discoloration from oxidation. There are light tool marks on and around some pin-heads as well as the slide wedge with a more notable vertical scratch above the wedge on the right of the slide. There are some other scattered minor nicks, scuffs and scratches. The screw heads are tool marked with strong slots. The markings are generally clear, the slide markings are stamped deeper at their tops than their bottoms and the rampant colt is worn. Overall, this pistol is in Good-plus condition.

Our Assessment: The 1902 is one of the most beautiful handguns ever made and an important link along the evolution line of the 1911. The wear on this pistol is honest and could even be considered light for a pistol that’s been around for more than a century. This pistol was made in 1917 during WWI, and toward the end of the 1902’s production. While sales continued through 1928, most after 1920 appear to have been sold out of existing inventory with production itself ending earlier. Around the time that this pistol was made, there was a transition in the practice of serial-marking slides, with earlier production not being serialized, early serial-marked slides having only the last three digits, and later having the full serial number marked on the slide. This pistol’s slide has the last three digits, but also has another three digits marked, indicating that it may be force-matched to the frame. Included is an early-style magazine with a nickel finish and patent marking which, while being from earlier production than this pistol, is nonetheless a scarce magazine. This is a fairly nice example of the 1902 military, a wonderful find for the Colt pistol collectors. Please see our photos and good luck!