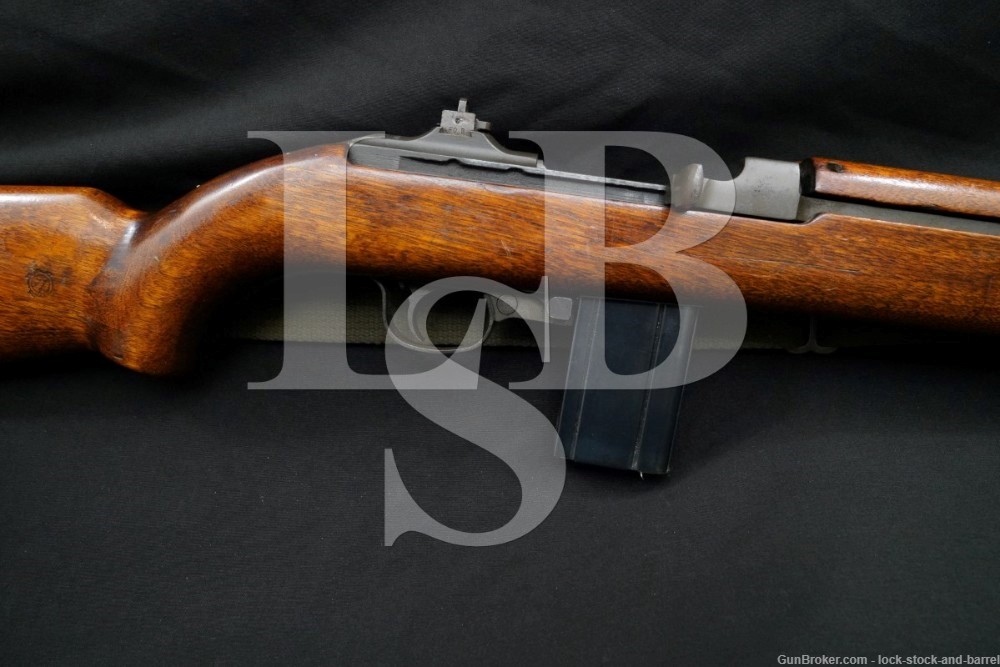 Model: M1 Carbine. This rifle is 1 part sort of being a “Matching” rifle.
The magazine was also made by a different manufacturer.

Sights / Optics: The front sight is a post set between two protective wings. The rear sight is a Type I flip up, dual aperture assembly.

Stock Configuration & Condition: The grip has been shaped and the stock has been refinished. The hardwood stock has a pistol grip, Type IA barrel band with sling loop, sling well, sling pass through, and a metal buttplate. The buttplate shows scrapes, small scratches, and discoloration from oxidation. The wood shows numerous small scrapes, scratches and compression marks. Some have damaged small portions of the surface wood. Most of these marks have been finished over. The LOP measures 13 ¼ inches from the front of the trigger to the back of the buttplate. The stock rates in about Very Good overall condition as refinished.

Overall Condition: This rifle retains about 85% of its metal finish. The metal shows several scuffs and small scrapes. The barrel shows light surface erosion and discoloration from oxidation. The trigger guard shows scratches and discoloration. The right side of the receiver shows thinning consistent with cycling. The recoil plate screw shows heavy use. Most of the markings are well defined. The markings at the front of the barrel are light. Overall, this rifle rates in about Good to Very Good condition.

Box, Paperwork & Accessories:The rifle comes with a green canvas sling. It shows oxidation and light scrapes on the metal as well as light soiling on the canvas. Overall it is in about Very Good Plus condition. The rifle comes with a 15 round magazine. It shows light scrapes as well as a patch of surface erosion along the bottom. It is in about Very Good condition.
The 15 round magazine is not available to residents of California or any other state with magazine capacity restrictions.

Our Assessment: This M1 Carbine was made back in 1943 by the International Business Machines Corporation (IBM). It is 1 part short of being a “Matching” rifle. The unmarked safety is the only non-IBM part on the rifle. The magazine was made by a different manufacturer but can easily be swapped out with an IBM mag. This IBM M1 Carbine has some finish issues on the metal but should clean up a bit. It will add to your WWII collection.