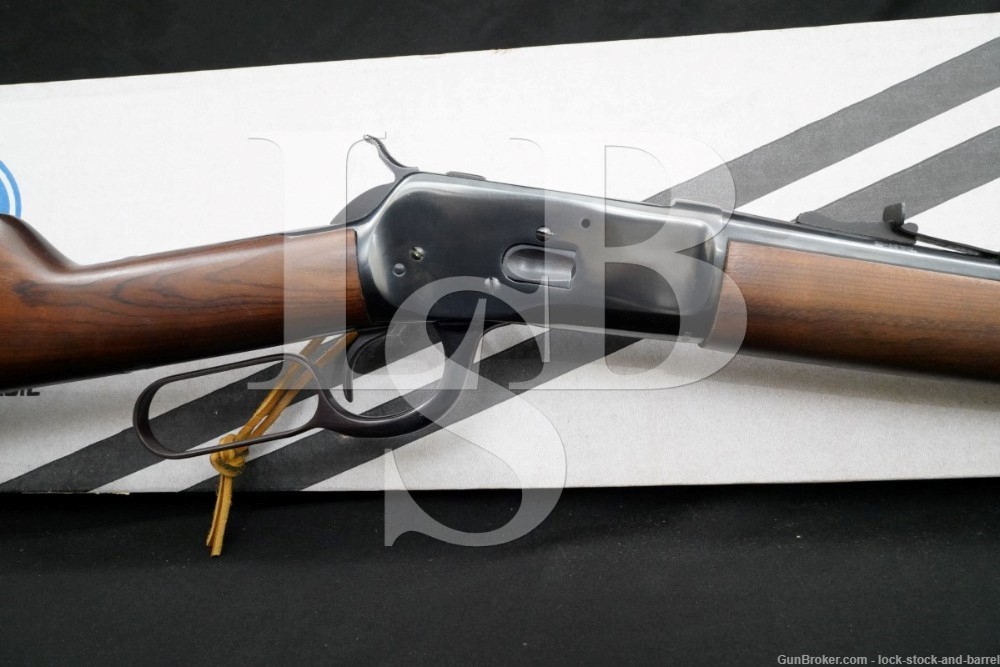 Sights / Optics: The front sight is a blade slotted and pinned to a rectangular base that is integral to a barrel band. The rear sight is a flat-top square notch with an elevator that is dovetailed into the barrel.

Stock Configuration & Condition: The stocks are smooth wood with a banded forearm, straight grip & comb, and a crescent blued steel buttplate. The stocks display no major imperfections, just some light storage marks. There are no chips or cracks. The LOP measures 13” from the front of the trigger to the back of the steel plate, which shows some light wear at the heel and toe. The stocks rate in about Fine-Excellent overall condition.

Bore Condition: The bore is bright and the rifling is slightly rounded yet well defined. There is no erosion in the bore.

Overall Condition: This rifle retains about 96% of its metal finish. The lever has taken a slight plum hue. The sides of the receiver show infrequently dispersed tiny nicks and fine little scratches and there are circular marks on the left side from contact with the saddle ring. There are some light scratches at the front of the magazine tube. The screw heads are sharp. The markings are crisp. Overall, this rifle rates in about Fine-Plus condition.

Mechanics: The action functions correctly. The rifle has a half-cock safety. We did not fire this rifle. As with all used firearms, a thorough cleaning may be necessary to meet your maintenance requirements.

Our Assessment: The Winchester Model 1892 rifle and carbine replaced the toggle link action of Winchester’s Model 1873 with a breechblock locked with two rectangular locking bolts that made it much stronger and suitable for the higher pressures of smokeless powder. It was designed by John Browning, and was sort of a scaled-down Model 1886 rifle, the first he designed for Winchester. The Model 1892 rifle was popular with ranchers and later was the rifle of choice for western movies and TV shows, even though they were often shown in the wrong period, years before they were actually developed. John Wayne used both M1892 rifles and carbines in many of his western movies. The M1892 rifles again became popular in the 1980s with the advent of Cowboy Action shooting, as they were smooth and dependable. The Model 65 was the first Puma to enter production in July 1976 and was designed after the M1892. It was manufactured until 1989. This rifle makes a good starting point to get into the world of Cowboy Shooting. With its sturdy and reliable design, it will serve you well in SASS, or just as a fun shooter at the range. Please see our photos and good luck!