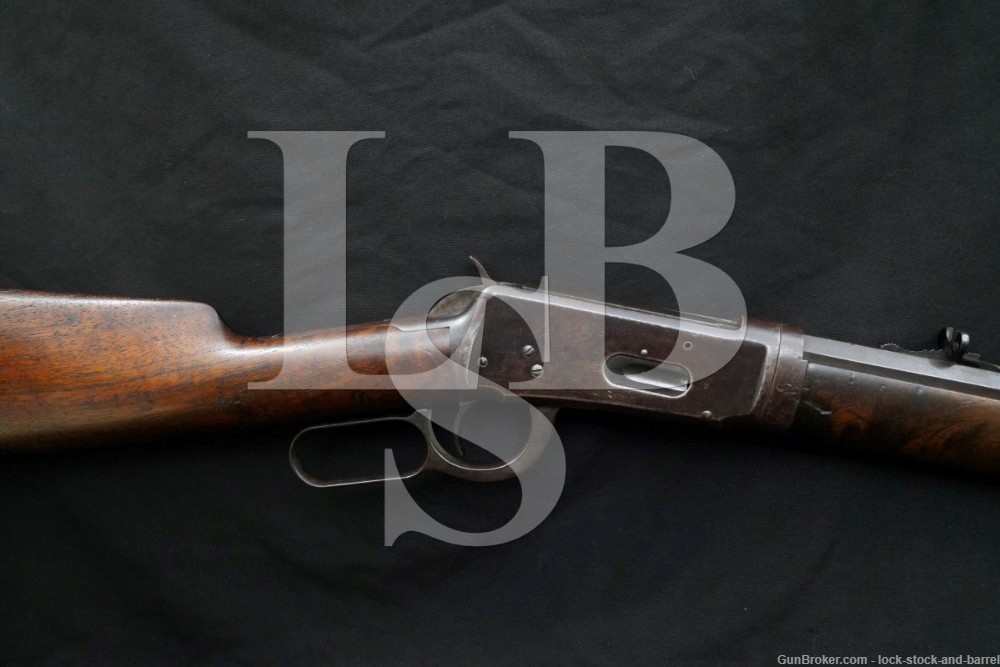 Action Type: This takedown rifle has a lever action with a full-length tubular magazine.

Sights / Optics: The front sight is a german silver blade in a slotted base dovetailed and screw-set to the front of the barrel. The rear sight is a “V”-notch semi-buckhorn elevator sight dovetailed to the rear of the barrel. The notch is fine-adjustable for elevation. Based on the condition of the rear sight compared to the barrel, it is likely a replacement. The top tang is drilled, tapped and filled for a tang sight (none present).

Stock Configuration & Condition: The stocks are 2-piece smooth walnut with capped forend, straight grip, straight comb and steel crescent buttplate. The forend has a chip-loss on the top-left edge near the rear. The stocks have some scattered nicks, dings, scrapes and scratches. There are some areas of dark discoloration. The LOP measures 13″ from the front of the trigger to the back of the buttplate. The plate has gone to a thick, dark patina with scattered solid erosion. Overall, the stocks are in about Very Good condition as Antique.

Bore Condition: The bore is gray with well defined rifling. There is light-moderate erosion and light pitting scattered through the bore.

Overall Condition: This rifle retains about 5% of its metal finish. Most remaining finish is in portions of the action which are concealed when the action is closed. There is some other scattered remaining finish, but most exposed surfaces have gone to a moderate patina. There are some areas worn white on the barrel and magazine tube, including at notable dings along the top edge of the left barrel flat. There are other scattered nicks, dings, scrapes and scratches as well as tool marks on each side of the barrel extension and receiver at the front. There are some scattered areas of light-moderate erosion with a more notable patch of scabbing on the top-right of the barrel behind the front sight. The action shows operational wear. The screw heads range from sharp to tool marked with most heads also ground. The markings are worn, but legible. Overall, this rifle is in about Good condition as Antique.

Our Assessment: This is a Winchester Model 1894 Takedown Rifle made in 1895. This was the first year that takedown 1894 rifles were offered and the gun is chambered for .38-55, one of the original two chamberings for the model. The rifle shows its age, but looks better than any of us will at 125 years old! This early Winchester M1894 would be a great candidate for restoration, but as it sits is an honest example of one of the first takedown ’94s. Please see our photos and good luck!