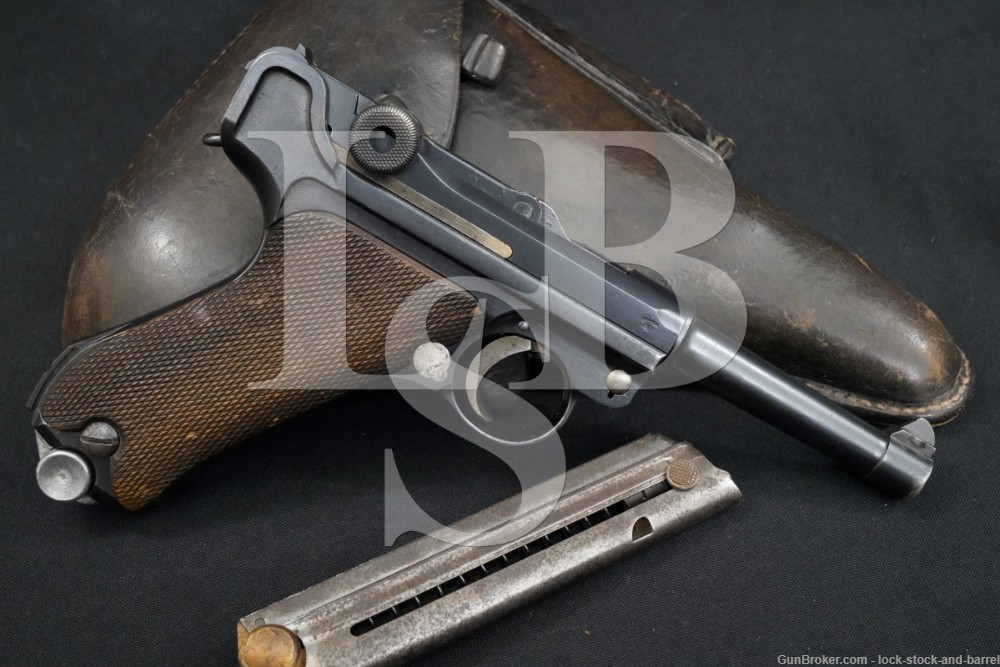 Model: Based on features, this is a P.08 Luger, BKIW-Mauser Transitional DWM (29 DWM), Police Issue. The serial number lacks a letter suffix, which is not typical of the 29 DWM pistols.

Markings: The barrel extension is marked with crowned “N” commercial proof and “7510” on the left, the right has an eagle over “WaA66” which is stamped over an eagle over “H”, both German Army inspection marks (the Army provided inspection for police issued pistols). The bottom of the barrel has crowned “N”, “7510” and another marking we do not recognize. The front face of the frame is marked “7510” and with the same unfamiliar marking. The sideplate is marked “10”, found again on the takedown lever (commercial placement), trigger, safety, bolt stop, the top of the extractor, the toggle pin, top of the front toggle link, the rear of the back toggle link and the inside of the right grip panel. The left of the firing pin is marked “78”. The breech-block is marked with an eagle (inter-war inspection mark) on the left and on the right with crowned “RC” and crowned script letter (Imperial German inspection marks). The breech-block does not have a serial marking, nor does the sear assembly. The top of the front link is also marked with a “DWM” logo. The bottom of the front toggle link is marked “5”. The left of the extractor is marked “GELADEN”. The inside of the left grip panel is marked “S/42” (later Mauser production code) and “G”. The alloy magazine floorplate is marked “7510 / I”, the wood floorplate is marked “GERMANY”.

Stock Configuration & Condition: The grips are two-piece checkered walnut panels. The grips show light-moderate handling wear with some nicks, scuffs and a spot of more notable wear at the bottom-front of the right panel. The right panel shows more wear then the left panel which is not original to the gun. The checkering is generally well defined. There is a small chip-loss at the top-rear of the left panel at the safety lever. There are no cracks. The right panel has minor play to the frame. Overall, the grips are in about Good-plus condition.

Finish Originality: Some parts appear to have Original finish and others appear Refinished, possibly due to the use of surplus parts and possibly due to DWM produced parts being finished and assembled by Mauser. The slot on the left frame flat for a magazine disconnect safety has been filled and finished over, but it is not clear if this was done at the factory or later refurbished. The breech-block has Imperial markings and may be a surplus part, the firing pin’s serial marking does not match the pistol.

Bore Condition: The bore is semi-bright with sharp rifling. There is no erosion in the bore, but there is stubborn copper fouling.

Overall Condition: This pistol retains about 87% of its current metal finish. The balance is mostly in scattered light surface oxidation, primarily in the grip areas. There is some light erosion on the frame under the right grip panel. The strawed parts show light wear and muting of their finish. The controls show handling wear. There is finish wear on the top of the breech-block around the extractor. There is finish wear on the barrel band, the leading edges of the frame and on the raised portion of the sideplate, consistent with holster use. The action shows light operational wear. The screw heads range from sharp to tool marked with a strong slot. The markings range from clear to worn, but legible with the exception of the unidentified mark mentioned. Not being familiar with that mark it is unclear if it is worn, poorly struck, or possibly one marking with another struck over it. Overall, this pistol is in about Very Good condition.

Mechanics: The action functions correctly. There is minor play between the barrel assembly and frame. This pistol has a sear safety installed, typical of Police-issued Luger pistols and it functions properly, preventing the sear from being tripped while the sideplate is not installed. The frame has a hole in the left above the trigger for a magazine safety, the left flat’s slot for the magazine safety has been filled. We did not fire this pistol. As with all used firearms, a thorough cleaning may be necessary to meet your maintenance standards.

Box, Paperwork & Accessories: This pistol comes with a black leather flap-holster and a total of two magazines. One magazine has a serial-matching alloy floorplate. This magazine shows scattered light wear and minor surface oxidation with intact feed lips and a strong spring. The other magazine has a wood floorplate. This magazine has more extensive surface oxidation, intact feed lips and a strong spring. The holster is marked “C.HEINICHEN / DRESDEN / 1937” and with eagle over “WaA142”. The holster shows moderate wear with intact stitching. There is a pocket on the inside of the flap for a takedown/magazine loading tool, but no tool is present.

Our Assessment: The Luger was adopted by the German Army in 1908 and was so reliable and well liked that it was still being made and issued to German troops well after the P38 was adopted by the army in 1938. The largest percentage of Lugers were made by DWM, which became Mauser in 1930. This is a Luger pistol which was most likely produced in the transitional period between DWM and Mauser production. This is based on the eagle/WaA66 and eagle/H marking on the barrel extension, combined with its police sear-safety and mixture of commercial and military serial marking on its parts. The serial number lacks a letter suffix, which is inconsistent with the BKIW-Mauser Transitional DWM pistols (mercifully abbreviated 29 DWM by collectors) and we have not been able to find a good reference for why this might be. There is an unfamiliar marking in the locations where the letter suffix would typically be marked, but we have also not found a reference to this marking. This pistol still has a functioning sear safety, which prevents the sear from being tripped when the sideplate is not installed. The frame has a hole for a magazine safety, but the left flat’s slot for this safety has been filled. For fans of the Luger, this pistol’s interesting mix of features and markings will make a nice addition to a collection as well as a good research project. It should also still make for a fun shooter. Please see our photos and good luck!