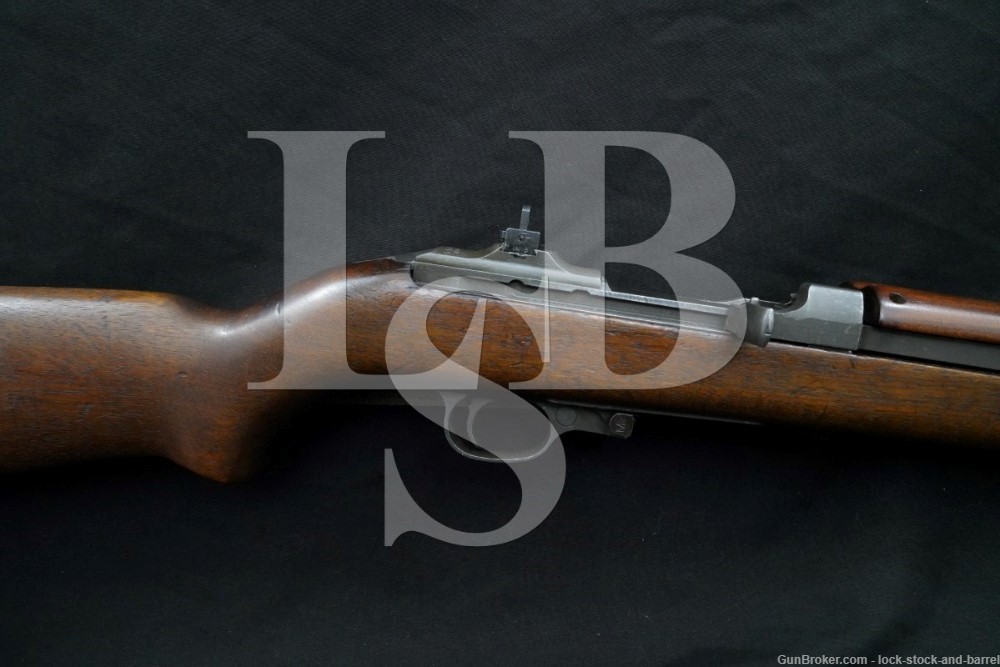 Sights / Optics: The front sight is a post set between two protective wings. The rear sight is a Type I, dual flip up aperture.

Stock Configuration & Condition: The two piece hardwood stock has a pistol grip, Type I barrel band with sling loop, sling well, sling pass through and a metal buttplate. The buttplate shows scrapes & thinning on the edges. The bottom of the grip is missing some edge wood. The wood shows scrapes, small scratches and compression marks. Several of the marks have damaged small areas of the surface wood. These marks have been oiled over. The LOP measures 13 ¼ inches from the front of the trigger to the back of the buttplate. The stock rates in about Very Good overall condition.

Overall Condition: This rifle retains about 92% of its metal finish. The metal shows scrapes, thin scratches, and light thinning on the leading edges of the metal. The barrel shows thinning and spots of discoloration from oxidation. The front sight band shows a large scratch on the bottom. The right side of the receiver shows thinning consistent with cycling. The screw heads show use. The markings on the metal are deep. Some of the stock markings are faded. Overall, this rifle rates in about Very Good Plus condition.

Box, Paperwork & Accessories: There is no magazine. The rifle comes with a green canvas sling. The sling shows light soiling on the canvas as well as light scrapes on the metal. The sling also shows fraying at the rear sling tab. It is in about Very Good Plus condition.

Our Assessment: This Rock-Ola M1 Carbine was made back in 1944. At some point it was “Arsenal Rebuilt” by the  Standard Products Corporation. It still uses lots of its original  Rock-Ola parts. There are lots of Rock-Ola markings on both metal & wood. Rock-Ola produced a small percentage of the total number of WWII M1 Carbines, making Rock-Ola M1 Carbines quite collectible. Good luck.