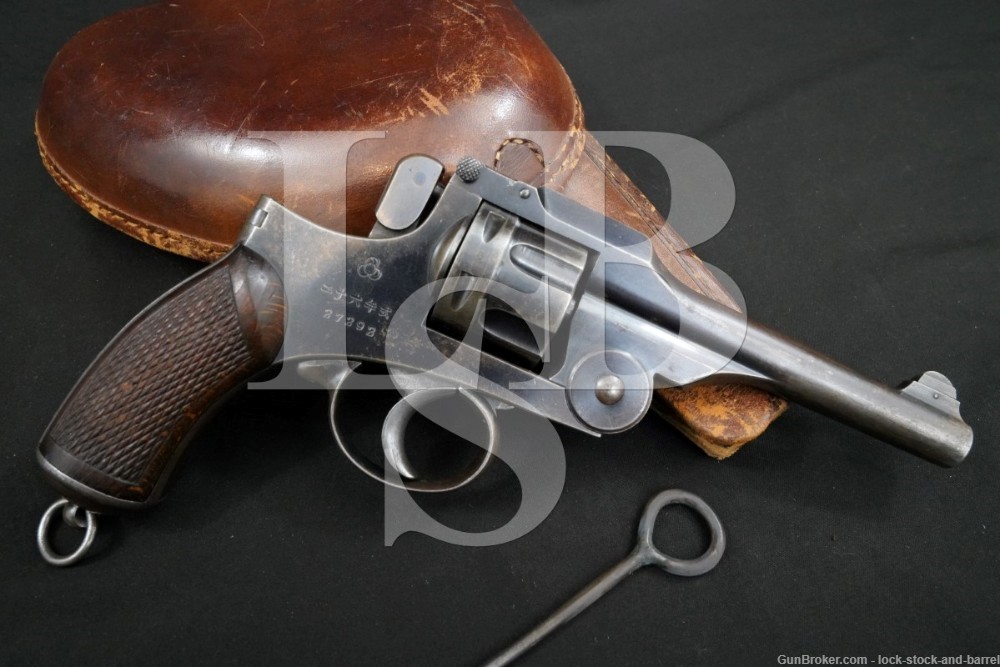 Sights / Optics: The front sight is a half-round blade pinned into a slotted base atop the barrel. The rear sight is a “U” groove at the back of the top strap.

Stock Configuration & Condition: The grips are two-piece checkered wood with smooth borders. The grips show handling wear with a few scattered light nicks, scuffs and scratches. There is a more notable ding in the rear edge of the left panel. The checkering is generally well defined. There are no chips or cracks. Overall, the grips are in Very Good condition.

Type of Finish: Blued. The hammer and some other small parts appear to have been fire-blued, but most of this finish has muted or worn away.

Bore Condition: The bore is mostly bright with sharp rifling. There is infrequent minor erosion.

Overall Condition: This handgun retains about 60% of its metal finish. The finish is thinning at all edges. The grip areas are mostly worn to white and there is wear on the barrel and cylinder consistent with holster use. The hammer’s finish has mostly muted or worn away, but with proper lighting and from the proper angles, its fire-blue finish can be seen. There is some other scattered more minor finish wear. The worn areas show minor discoloration from oxidation. There are some scattered light nicks, scuffs and scratches. There are tool marks at the finger-groove for the sideplate. The action shows operational wear and there is handling wear on the trigger and barrel latch. There is wear on the grip cap around the lanyard ring. The screw heads are tool marked with serviceable slots. The markings are clear. Overall, this handgun rates in Good-Very Good condition.

Mechanics: The action functions correctly. The cylinder free spins in both directions unless the trigger is pulled back. The barrel locks up with minor play to the frame. The cylinder lockup shows light-moderate play. We did not fire this handgun. As with all used firearms, a thorough cleaning may be necessary to meet your maintenance requirements.

Box, Paperwork & Accessories: The revolver comes with a brown leather clamshell holster. The holster has brass fittings, a pocket for the included cleaning rod, and there is a pouch with its own flap which has loops for 18 cartridges (no cartridges included). The holster shows scattered wear, scuffs, scrapes and scratches. There is fraying at some edges. The stitching is intact. There is verdigris at the brass fittings. Overall, the holster is in Good condition.

Assessment: The first service revolver used by the Japanese was the Smith & Wesson in .44 Russian. They started designing their own revolver in 1890 and the Type 26 was finished in 1893 and adopted by the military in 1894. It was a double action only revolver with a six-shot cylinder firing a 9mm Japanese cartridge similar to the .38 S&W. The Type 26 revolvers stopped production in 1923 but were still used as secondary weapons even after the Type 14 Nambu was introduced in 1926. Because of their use in the Russo-Japanese War and in WWI, many of the early Type 26 revolvers were arsenal refurbished, with the original bright blue finish replaced by a dull blue and the checkered grips replaced by those with horizontal serrations. This is an example from Standard Production, and retains its original finish. The serial numbers on the cylinder, frame, hammer, barrel, trigger guard and grips are matching, there are also matching assembly numbers on the frame, cylinder and barrel. The revolver is in Good-Very Good condition, with about 60% of its finish remaining. The bore is surprisingly good and the mechanics are still fairly strong. To complete the package for the discerning collector, the revolver comes with a Type 26 holster and cleaning rod. This good-looking revolver should make a nice addition to any collection of Japanese martial arms. Please see our photos and good luck!