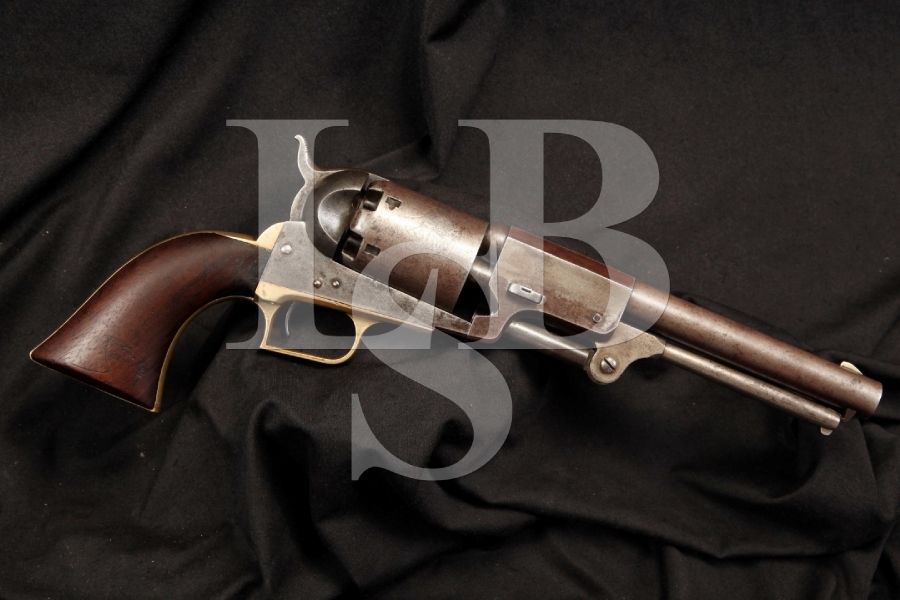 Barrel Length: The half round half octagon barrel is 7 ½”.

Sights / Optics: This revolver is mounted with a “U” grooved hammer and a brass blade front sight.

Type of Finish: The barrel and cylinder are blued, the frame, loading lever and hammer are case colored, and the trigger guard and backstrap are brass.

Bore Condition: The bore is bright and the rifling deep. There is light erosion near the muzzle and near the breech.

Overall Condition: This revolver retains about 30% of its metal finish. The rear of the barrel just in front of the cylinder and the sides of the hammer show pinprick surface erosion. The barrel, loading lever, cylinder and frame have lost most of their finish and show frosting with a brown patina starting to form on the octagon part of the barrel. The barrel shows a series of short scratches on the left side behind the rear sight and a few handling and compression marks. The frame shows light scratches from polishing behind the recoil shield on the left side, and small compression marks on both sides, There are tool marks around the barrel wedge slot on the right side. The cylinder shows small compression marks in the edges of the slots surrounding the nipples and the nipples show erosion but are otherwise undamaged. The left side of the trigger guard along the frame shows compression marks, as do the bottom of the trigger guard and the bottom of the backstrap. The front strap and backstrap both show handling marks, a few compression marks and light tarnish. The cylinder does not have a drag line. The ramrod screw and the front screw on the left side of the frame are distressed. The other screws are sharp, but two or three show marks of a screwdriver. The edges of the barrel are sharp and the markings are clear except for “COLT’S” on the left side of the frame. The markings are clear. Overall, this revolver rates in about Very Good – Fine condition.

Mechanics: The action functions correctly. The cylinder lockup shows only a very small amount of play and the trigger pull is crisp. However, there is a very fine irregular surface crack that runs along most of the length of the flat top of the barrel. It stops at the “A” in Address and at the “C” in City. We did not fire this revolver.

Our Assessment: From Wikipedia: “The Colt Model 1848 Percussion Army Revolver is a .44 caliber revolver designed by Samuel Colt for the U.S. Army’s Mounted Rifles, also known as “Dragoons”. This revolver was designed as a solution to numerous problems encountered with the Walker Colt, and like the Walker, was often carried in a pommel holster due to its size.”. According to “Massachusetts Marked Colt Second Model Dragoon Revolvers: Their Early History and U.S. Civil War Issue” by Douglas L. Hays, Jr. only 100 Colt 2nd Model Dragoons were procured from the U.S. Ordnance Department by the Massachusetts Militia in 1852. Hays estimates about only 20 “MS” marked 2nd Models are known to exist today. This dragoon was one of a collection belonging to Herbert A. Lyman, a prominent Southern California collector of Colt pistols and revolvers. Prior to his death, he sold all of his dragoons except for this one – it’s not hard to figure out why. This revolver is in Very Good condition. It has lost most of its original finish and shows frosting and a few areas of pinprick surface erosion. The edges of the barrel are sharp and the engraved scenes on the cylinder are still legible. The rifling in the bore is deep but with light erosion at the muzzle and breech. One side of the grip of marked with a sub-inspector’s cartouche, while the other side has an inspector’s cartouche. The frame is marked with “US” as procured by the U.S. Ordnance Department, with “B” inspector stamps on all parts, and the correct serial number on numbered parts, including the grip. This is a fantastic opportunity for a collector of early Colt firearms. Only about 2700 of the 2nd Model Dragoons were made, and of these only 100 were issued to the Massachusetts militia.