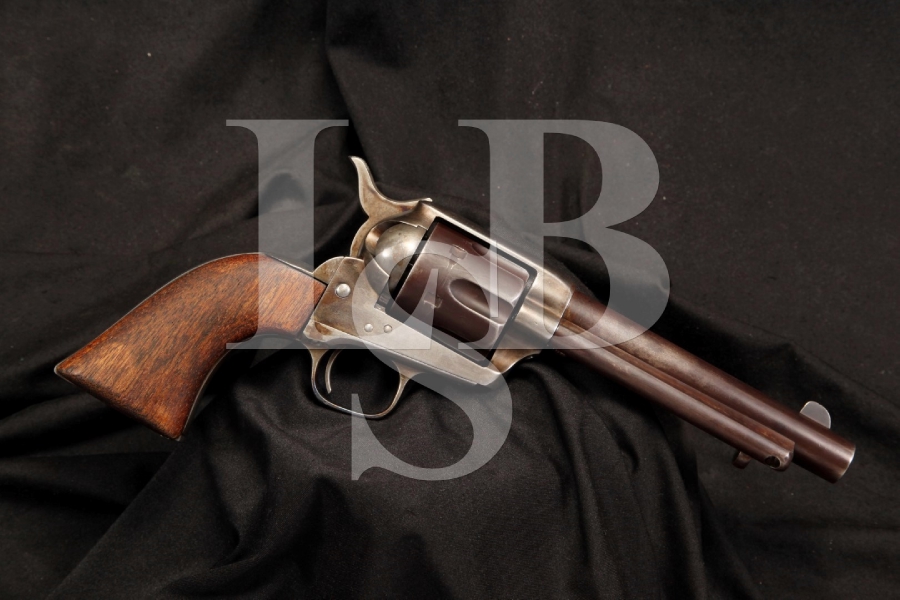 Sights / Optics: The front sight is a narrow quarter round blade fixed to the barrel. The rear sight is a “V” groove in the top strap.

Type of Finish: The barrel, cylinder, ejector rod housing and grip frame were blued. The frame and hammer are case colored.

Finish Originality: Several parts were probably refinished or replaced when the revolver was converted to an Artillery model by Colt in 1900-1903. At a minimum, the cylinder on this revolver has been refinished.

Bore Condition: The bore is bright and the rifling is shows very light wear. There is light erosion in one of the grooves near the muzzle.

Overall Condition: This revolver retains about 40% of its metal finish. The barrel, frame, trigger guard and backstrap all show thinning and light scratches from polishing. The barrel also shows surface frosting and the left side shows light pitting near the muzzle and a few light compression marks along its length. The ejector rod shows thinning and a compression mark on its front edge. The frame shows light pitting along the top strap, back side of left recoil shield and the sides of the frame along the trigger guard. There is a compression mark on the top front edge of the frame on the left side. The trigger guard shows compression marks around its front screw, the surface of the trigger guard and a heavier mark on the right side. The backstrap shows slight marks on its back surface and compression marks on its front corner. The cylinder shows a drag line in the metal under the finish and the front edge is rounded. The cylinder shows thinning on its front edge and the edges around the flutes and a few small marks. The hammer checkering shows moderate wear and the hammer still shows spots of its case coloring. The hammer and ejector rod screws are sharp and the others are distressed. The markings on the barrel are a little faint in spots. Overall, this revolver rates in about Very Good condition.

Mechanics: The action functions properly. The cylinder lock-up shows play on all six chambers. The trigger pull is crisp and VERY LIGHT. We did not fire this revolver. The ejector rod has a round button characteristic of an earlier model, and was probably made in the same time frame as the barrel.

Our Assessment: This is an Artillery Model Blackpowder Colt 1st Gen. SAA revolver in .45 Colt. This Artillery Model was re-furbished sometime in the 1900 to 1903 time frame with non-matching numbers on the barrel, frame and trigger guard, but complete with inspection marks in the metal. The cylinder was refinished at some point. Overall, the revolver is in Very Good condition. The finish has been well polished and the bluing on the barrel and grip frame is mostly removed, but case coloring can still be seen on the hammer. There is frosting on the barrel and light erosion on the frame. For a revolver that was first issued in time for the Indian Wars and converted to an Artillery Model in time for the Philippine-American War, it is in remarkably good condition. This revolver represents a significant period of American history, when “six guns” were still being used to arm our troops. This U.S. marked revolver is sure to catch the interest of a Colt collector.