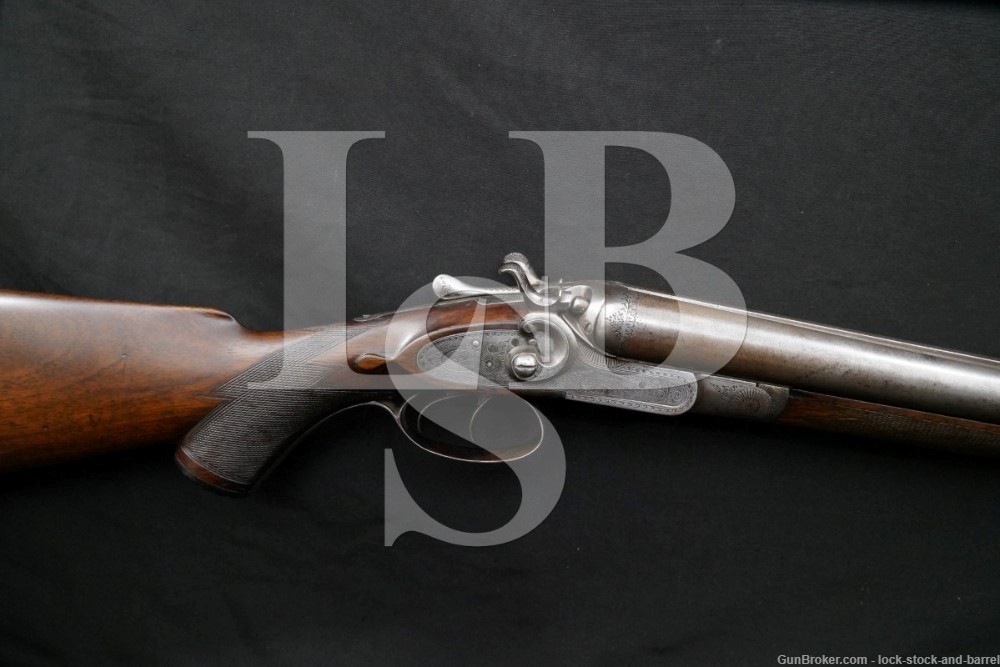 Action Type: Side by Side, Side-Lock, External Hammer Shotgun

Choke: Both Full, Both Fixed.

Sights / Optics: There is a brass bead mounted to the front of the rib. The rib has wavy serrations for glare reduction.

Stock Configuration & Condition: The stocks are two-piece checkered walnut with splinter forend, capped pistol grip, straight comb, checkered hard rubber buttplate and a brass initial plate inlaid to the belly. The front of the forend is cut for an inlay at the tip, but the inlay is missing. The buttplate has an embossed hunting dog with a bird in its mouth and a “B”-Anchor logo (per the included information from Graham Greener, this appears to be Albert Greener’s trade mark, it is seen on most of his guns). The stocks have scattered nicks, scuffs and scratches. There are a couple of minor losses around the top tang. The grip cap has a small loss on the left, leaving a gap to the grip. The checkering shows handling wear, but is generally well defined. There are no cracks. Drop at comb is 1 3/4”, drop at heel is 2 3/4”. The LOP measures 14 1/2” and 13 1/2” from the fronts of the triggers to the back of the buttplate. The plate has light wear, mostly at the heel and toe with well defined checkering. The stocks rate in about Very Good overall condition as Antique.

Overall Condition: This shotgun retains about 20% of its metal finish. The barrels have wear along the sides with fairly good damascus patterning on the tops and bottoms, strongest under the forend. The exposed portions of the receiver are worn to white with some pretty good case color on the water table. There are scattered nicks, scuffs and scratches with some discoloration from oxidation and infrequent spots of minor erosion. The action shows operational wear. The screw heads range from sharp to tool marked with serviceable slots. The markings are clear. Overall, this shotgun rates in about Very Good condition as Antique.

Mechanics: The action functions correctly. The barrels lock up with no play to the receiver. We have not fired this shotgun. As with all used firearms, a thorough cleaning may be necessary to meet your maintenance standards.

Box, Paperwork & Accessories: Correspondence with Graham Greener of W.W. Greener Ltd. is included with the shotgun.

Our Assessment: This “California Club Gun” is marked as made by Albert Greener, third son of William Greener. The Greener history of gunmaking goes back to the early 19th century, with William Greener learning his trade under names such as John Gardner and John Manton. William Greener began his own company in Newcastle in the 1830s, moving to Birmingham in 1844. The company founded by his son, William Wellington Greener, is still in existence today, which is wonderful because we were able to contact them regarding this particular shotgun. While W.W. Greener was able to begin his own gunmaking company, ultimately not only overshadowing but also competing directly with his father’s company, while his younger brothers both emigrated to America. Albert Greener crossed the pond between 1867 and 1869, just before his father passed, and the trail goes mostly cold after this. It is known that he was in San Francisco in 1869, but he does not appear in any US, UK or Canadian census after 1861. The lack of information about Albert Greener combines with the limited number of guns produced to make it very difficult to determine which guns were actually produced by Albert and which are forgeries trading on the Greener name. We were able to contact none other than Graham Greener, W.W. Greener’s great grandson and owner of W.W. Greener Ltd. today, who was able to provide us with his opinion of the gun. According to Greener, “your shotgun is probably genuine. It is very similar to a number of other Albert Greener shotguns and of the same type, top lever opening, double grip with dolls head extension to the top rib…It is a grade 2 gun and the butt plate appears to be his trade mark since this is seen on most of his guns.”. Graham was also kind enough to include a brief history of Albert Greener which will come along with the gun to its new owner. This gun appears to have survived the last 130-140 years quite well, showing wear which is fairly light considering its age, decent bores and strong mechanics. This will certainly interest collectors of fine shotguns, and will be especially nice for the dedicated Greener collectors as a rare example of the work of William Greener’s third son, W. W. Greener’s younger brother, Albert. Albert lived the dream, leaving dreary England for the West coast of America, starting his own gun-making business, and living in San Francisco before it became…whatever it is now. Please see our photos and good luck!