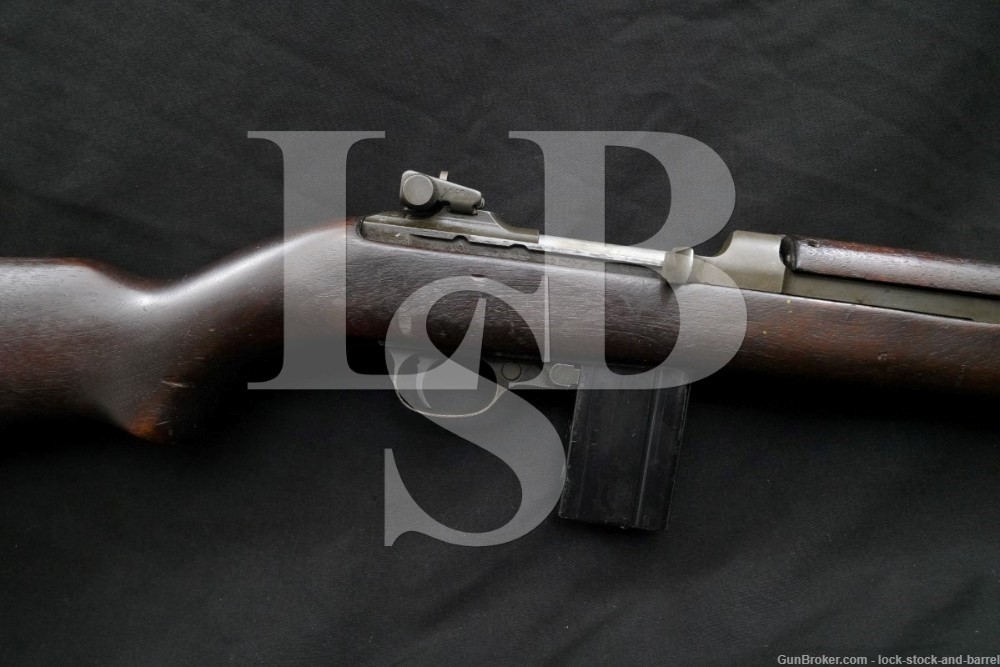 Make: Winchester. The receiver was originally produced by the Underwood Corporation.

Serial Number: 6467201. This is a Winchester serial number. Underwood did not use serial numbers in this range.

Stock Configuration & Condition: The wood stock has a pistol grip, Type III barrel band with sling loop & bayonet lug, sling well, sling pass through, and a metal buttplate. The buttplate shows discoloration and an area of surface erosion. The bottom of the forearm is marked “I with a line through it” and “W / A” in faded paint. This area shows an area of sanding. The wood shows several scrapes, scratches, and compression marks. Many of the marks have damaged small portions of the surface wood. Most of these marks have been oiled over. The LOP measures 13 ¼ inches from the front of the trigger to the back of the buttplate. The stock rates in about Very Good overall condition.

Overall Condition: This rifle retains about 92% of its metal finish. The metal shows scrapes, small scratches, and areas of discoloration. The receiver, barrel, and trigger group shows areas of thinning below the wood. The right side of the receiver and bolt show thinning consistent with cycling. Most of the markings are deep. Overall, this rifle rates in about Very Good condition.

Box, Paperwork & Accessories: The rifle comes with a 15 round magazine. The magazine shows scrapes & oil residue. It is in about Very Good Plus to Fine condition.
The 15 round magazine is not available to residents of California or any other state with magazine capacity restrictions.

Our Assessment: This Winchester M1 Carbine has Rare markings on the receiver. The receiver was originally manufactured by Underwood. It was acquired under Wincheter’s late war “spare parts” program and is now considered a Winchester receiver. The bottom of the “UNDERWOOD” name was crossed out with a “line” and the area below was stamped “A W”. These markings were added by Winchester. The receiver was also assigned a Winchester serial number.
After WWII this Winchester M1 Carbine served for a U.S. friendly country and is now import marked. Luckily the import mark is on the barrel flat so you only see it when the rifle disassembled. The rifle was “Arsenal Rebuilt” by the Standard Products Corporation and now uses a mix of USGI parts as well as lots of original Winchester parts. This is a good looking M1 Carbine to add to your collection.