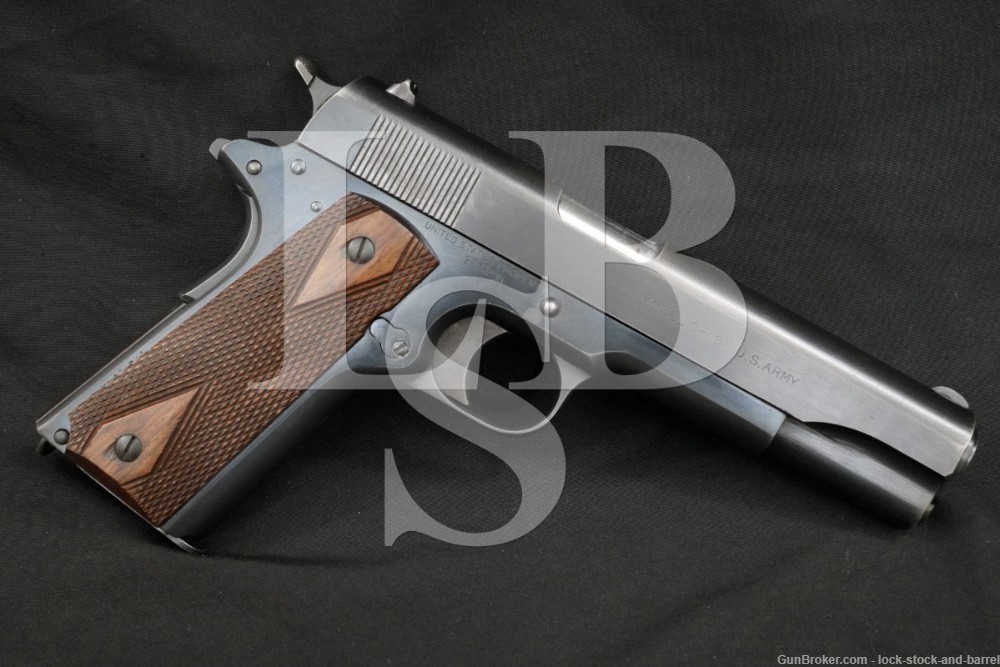 Stock Configuration & Condition: The grips are two-piece reproduction checkered wood panels with smooth diamonds around the grip screws. There are tool marks around the grip screws on the right panel and a couple of compressions in the bottom diamond on the left panel. Otherwise, there is no notable wear or damage, only light handling marks. The checkering is sharp. There are no chips or cracks. Overall, the grips are in about Fine condition as not original to the gun.

Overall Condition: This pistol retains about 95% of its current metal finish. The finish is thinning at the leading edges of the slide. There are some scattered minor nicks, scuffs and scratches. The action shows operational wear. There is some erosion and pitting under the finish on the frame, nearly all is covered by the grips when they are installed. There is also pinprick erosion under the finish on the trigger. The screw heads are sharp. The markings are generally clear, the markings on the left of the slide are worn, but legible. Overall, this pistol is in about Very Good-plus condition as refinished and assembled.

Box, Paperwork & Accessories: This pistol comes with a single 7-round two-tone magazine. The magazine has light operational wear, intact feed lips and a strong spring.

Our Assessment: The 1911 and 1911-A1 pistols served the military of the United States from 1911 to 1985, through two World Wars and the Korean and Vietnam wars. They gained a reputation as a reliable handgun with plenty of stopping power, and are held in high regard by those who have used them. This is an interesting example which has been assembled with a 1918 Colt frame and an intriguing slide. For many years, the “S” in flaming bomb marking was believed to indicate production by A.J. Savage, but this was mostly based on Savage starting with an “S”. More recent research strongly suggests that these slides were unfinished parts originally produced by Remington UMC during the war which were later sent back to Springfield Armory along with the production tooling used by Remington UMC which was owned by the US Government. It is believed that Springfield completed the partially machined slides as replacement parts for the pistols which remained in inventory. The profile of the slide as well as the arrangement of the patent markings lines up well with that of the Rem-UMC slides and the “S” in flaming bomb marking closely matches those used on 1903 rifle barrels. While not definitive, this has become accepted as a plausible explanation for the slides’ markings and appearance. This pistol’s frame also has “heart” cuts under the grips, a feature which resulted from a simplified machining process to increase production during the war. The pistol is in about Very Good-plus condition, having been refinished, showing scattered light wear, some erosion under the finish which is mostly covered by the reproduction grips, and a replaced barrel which has a great bore. This will make a great shooter if not snapped up by a collector who wants a fun research project with interesting features and markings. Please see our photos and good luck!