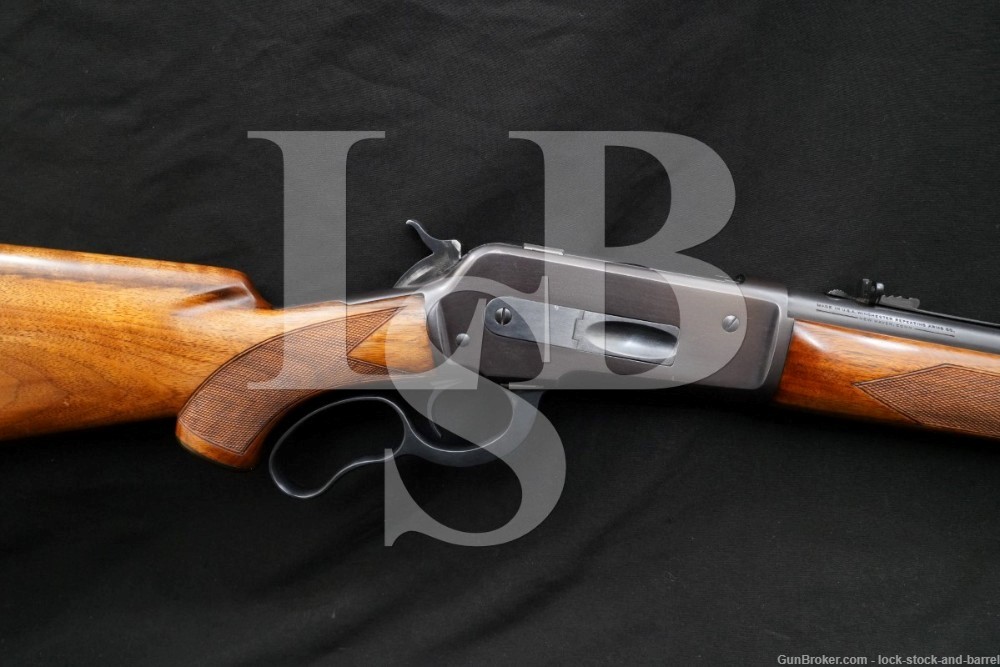 Action Type: This rifle has a lever action with a two thirds length tubular magazine.

Sights / Optics: The front sight is a brass beaded blade dovetailed to a textured ramped base fixed to the front of the barrel. The base is grooved for a hood, but none is present. The rear sight is a “U”-notch leaf and elevator sight dovetailed to the rear of the barrel with the notch fine-adjustable for elevation. The left of the receiver has had four holes drilled, tapped, and filled presumably for a scope mount, but no mount present.

Stock Configuration & Condition: The stocks are 2-piece checkered walnut with a capped pistol grip, fluted comb, semi-beavertail forend with steel cap, and checkered steel shotgun-style buttplate. There is a sling mount screwed to the belly near the toe and another dovetailed to the nosecap. This rifle has the shorter tang and longer comb of later production models. The forend has a few scattered light nicks and scuffs. The buttstock has some scattered minor nicks, scuffs and scratches with a more notable scrape on the right of the comb toward the rear and a few more notable compressions toward the rear on each side. There are a couple of short, thin cracks at the rear of the top tang. There is a repaired chip-loss at the top-front corner of the wrist on the left. There are longer, but still thin cracks on each side of the stock near the toe and another at the heel. The checkering is well defined. The LOP measures 13 1/4″ from the front of the trigger to the back of the buttplate. The plate has scattered light wear, mostly at the heel and toe with some under the finish, retaining well defined checkering. Overall, the stocks are in about Very Good condition as refinished.

Bore Condition: The bore is bright with sharp rifling. There is infrequent very minor erosion in the bore and some stubborn copper fouling.

Overall Condition: This rifle retains about 96% of its current metal finish. The finish is generally strong throughout. The barrel has a few light nicks and scratches, most around the front sight base or in a patch around 4″ behind the front sight. The receiver has a few scattered light nicks and scratches. The receiver has scattered minor erosion under the finish, with infrequent very minor erosion under the finish on the barrel. The receiver’s finish has a slight plum hue. The action shows light operational wear. The screw heads range from sharp to tool marked with strong slots. The markings are clear. Overall, this rifle is in Very Good-Fine condition as refinished.

Our Assessment: This is a Winchester Model 71 Deluxe rifle made in 1941. The Model 71 was a continuation of the 1886 design, with a pistol grip, shorter magazine tube and round barrel, produced in only two variants, 24″ and 20″. This rifle is chambered in .348 WCF, the only cartridge the 71 was ever chambered for besides experimental models, and which was actually developed just for this model. The cartridge is great for North American big game hunting in brush where shorter shots are taken and with modern projectiles such as Hornady’s Lever-evolution can now perform well at longer ranges, as well. This rifle is in Very Good-Fine condition as refinished with about 96% of its new metal finish remaining. The bore is bright with sharp rifling and infrequent very minor erosion. The stocks have been refinished, so they look great, too. All of the Winchester rifles made before 1964 are prized by shooters and collectors alike, but the Model 71 was produced for 22 years, a relatively short production life for a Winchester, with fewer than 50,000 rifles made altogether. A model 71 in any condition will likely bring a lot of interest from the Winchester collectors and this early Deluxe example is in good shape with a bright bore and strong mechanics. Please see our photos and good luck!