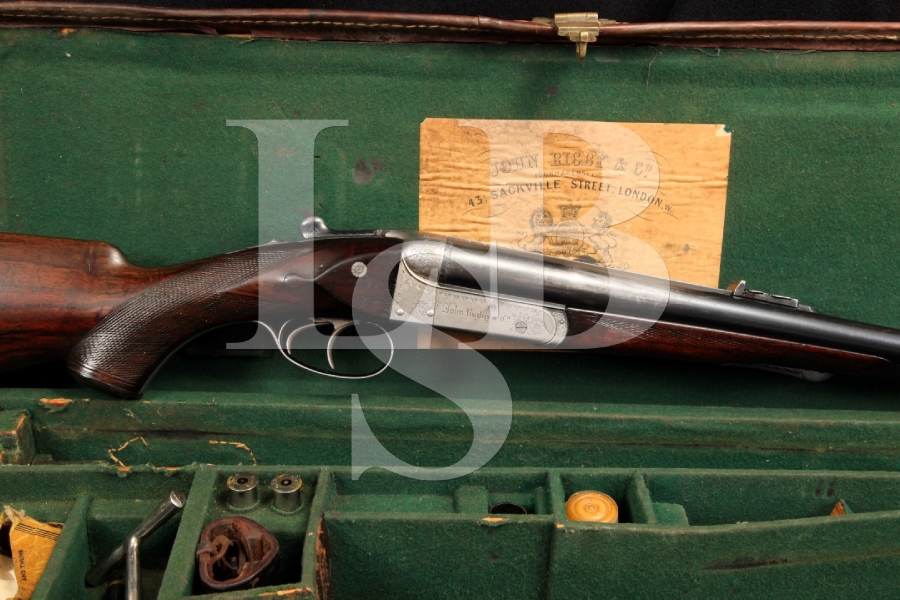 SOLD FOR:$25,100
Make: John Rigby & Co.
Model: Class C .470 Nitro Express Double Rifle
Serial Number: 17964
Year of Manufacture: 1912 or Later
Caliber: .470 Nitro Express
Action Type: Side by Side Doll’s Head Double Rifle with Double Triggers
Markings: The barrel rib is marked “John Rigby & Co. 43.Sackville St. London.” The top of the left barrel is marked “Special . 470 Bore . Big Game Rifle” and the top of the right barrel is marked “For Special Cordite Cartridges & Bullet 500 Grs.” The forearm retaining lug is marked “TB” on the bottom and “13570” on the left side. Both barrel flats are marked “CORDITE 75 – 500 MAX” and “470 EX”. The both have the same proof marks, including a provisional black powder proof, a Crown over “CP” nitro proof, Crown over “V” London inspection mark and an “NP” London semi-smokeless proof mark. The left barrel flat is also marked ”CLASS C” while the right barrel flat has the serial number “17964”. The both sides of the water table are marked with the Crown over “V” London inspection mark, with the left side also having “17964” while the right side has “CLASS C”. Both sides of the receiver are marked “John Rigby & Co.” and the lower tang is marked “17964”. The inside of the forearm is marked “CLASS C” and “17964”. There is light scroll engraving on the metalwork other than the barrels. The silver medallion on the belly of the butt stock is marked “J. McK.”
Barrel Length: 26”
Sights / Optics: The front sight is a brass beaded blade on a ramp which is slotted for securing a hood and the rear sight is a fixed express sight with two folding leafs, one marked “200” and the other “300”.
Stock Configuration & Condition: The two piece stocks are nicely figured checkered walnut. The stocks show wear on the checkering, handling and compression marks consistent with use in the field. There are no notable chips, cracks or scratches. The LOP measures 14 3/8″ from the front of the forward trigger to the back of the red rubber recoil pad, which has become exceedingly firm. The stocks rate in about Very Good to Fine overall condition.
Type of Finish: Blue Barrels, Trigger Guard and Thumb Latch with a White Receiver
Finish Originality: All Original
Bore Condition: The bore is bright and the rifling is sharp. There is no erosion.
Overall Condition: This rifle retains about 75% of its metal finish. The balance of the finish shows thinning and handling marks. There is a small compression mark on the receiver’s lower left side, about even with the breech face. The screw heads are sharp. The markings are clear. The barrels have a mount for a sling swivel, and the butt stock still retains the sling swivel Overall, this rifle rates in about Very Good to Fine condition.
Mechanics: The action functions correctly. We have not fired this rifle.
Box, Paperwork & Accessories: A leather trimmed canvas luggage case with brass hardware is provided. It is marked “H. G. INGLE. / KOLHAPUR, / INDIA.” on the lid. The canvas is stained and worn or torn through in several spots. The leather strap on the right side has torn but the piece is retained. The exterior of the case is in Good to Good Plus condition. The interior of the case is lined in green felt that is in about the same condition as the exterior. It has some stains, is worn through in several spots and is coming unglued in others. What the interior does have, however, is a roughly 6” tall by 7” wide John Rigby & Co. label on the inside of the lid. It looks nicely aged and original. It is marked John Rigby & Co. / (Gunmakers) Ltd / 43.SACKFIELD STREET, LONDON, W. / a crest with two lions / by / Appointment / GUN & RIFLE MANUFACTURERS / And at 24 Suffolk Street, Dublin”. Beneath that it states: TELEGRAMS / “RIFLING, LONDON.” and TELEPHONE / 3065 Mayfair. The label is wrinkled, worn in one spot and torn at the top right corner yet it still manages to look great. There is also a label warning against storing the rifle with the hammers at full cock as the “springs get weak and miss fires will result.” Please see the photos of these old labels affixed to the inside of the lid. There are in addition two snap caps, a screwdriver, cleaning patches in a disintegrating Parker Hale box, a wrench for the firing pin mechanisms, a hood for the front sight, a small container containing a rolled up cloth for wiping off the rifle and a leather muzzle guard, all in Very Good condition (except the box.)
Our Assessment: This John Rigby double rifle is chambered in .470 Nitro Express and is marked on the rib for cordite as the propellant. We know the .470 NE was manufactured starting about 1907. We know Rigby’s web site states John Rigby moved to the 43 Sackville Street address in 1912. Beyond that, only a search of Rigby’s records could determine the date of manufacture for this double rifle. (It is, however, more than a little puzzling that Rigby’s own web site also states their Dublin address was closed in 1897.) The .470 Nitro Express was developed to be a dangerous game cartridge, and the double rifle was the preferred dangerous game firearm. Both are still serving the same function a century later, with the .470 currently being the most popular of all the nitro express cartridges. This rifle and cartridge combination is more than capable of stalking Africa in search of dangerous game. Honor tradition and take this rifle with you on your next African hunting trip.