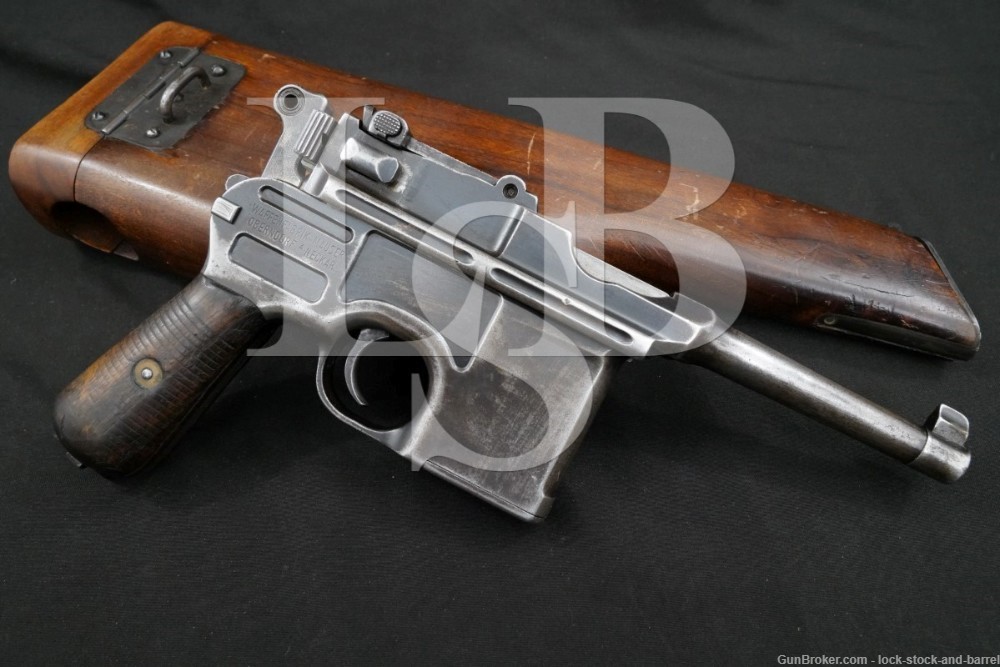 Sights / Optics: The pistol is mounted with a “V” notched rear sliding elevator sight with markings from “50-1000” that is pinned to the barrel extension. The front sight is a blade fixed to the front of the barrel.

Stock Configuration & Condition: The grips are two-piece serrated walnut panels. The grips show moderate handling wear with some scattered nicks, dings and scratches. The serrations are worn and incomplete There are no chips or cracks. Overall, the grips are in about Good condition.

Bore Condition: The lands are semi-bright, the grooves are dark. The rifling is well defined. There is some scattered light erosion on the lands, the grooves have more moderate erosion and some light pitting.

Overall Condition: This pistol retains about 60% of its metal finish. The finish is thinning at all edges. There is scattered finish wear, most notable in the barrel, the grip areas, the right of the frame and on raised features such as the frame rails. There is some scattered minor surface oxidation as well as some minor erosion, most notable on the right of the frame. The magazine floorplate has a dent in the middle. There are some scattered nicks, scrapes and scratches. The action shows operational wear. The screw head is lightly tool marked with a strong slot. The markings are generally clear, some are worn, but legible. Overall, this pistol is in Good condition.

Mechanics: The safety’s detent is not very strong, if the pistol is pointed up with the safety on and the hammer is pulled back, the safety will fall to the Fire position. Otherwise, the action functions correctly. We did not fire this pistol. As with all used firearms, a thorough cleaning may be necessary to meet your maintenance standards.

Box, Paperwork & Accessories: This pistol comes with a wood stock/holster. The mounting bracket is marked “154”, the hinge assembly is marked “212”, neither matching the pistol. The stock/holster has a few short cracks at the bracket-end with long, repaired cracks at either end on the top (over the sights) and another long, repaired crack below the hole for the butt. There are scattered nicks, scuffs and scratches.

Our Assessment: The Broomhandle Model 1896 Mauser is certainly an interesting looking firearm. Its features are the most distinctive of any other pistol. In addition to being popularized in Soviet films as the iconic weapon of the Russian revolution and civil war, it was even used as a basis for futuristic weapons like the blaster used by Han Solo in Star Wars. This pistol is a Post-War Bolo. It has wear which is fairly light, considering the history of these pistols, many of which were used in China and Russia during their conflicts in the early 20th Century, and has fairly strong mechanics. All of the serialized parts match, though the included stock/holster does not. This pistol should appeal to a anyone who always wanted to own a Broomhandle, and for the collectors this is a pretty nice example of the Post-War Bolo. Please see our photos and good luck!