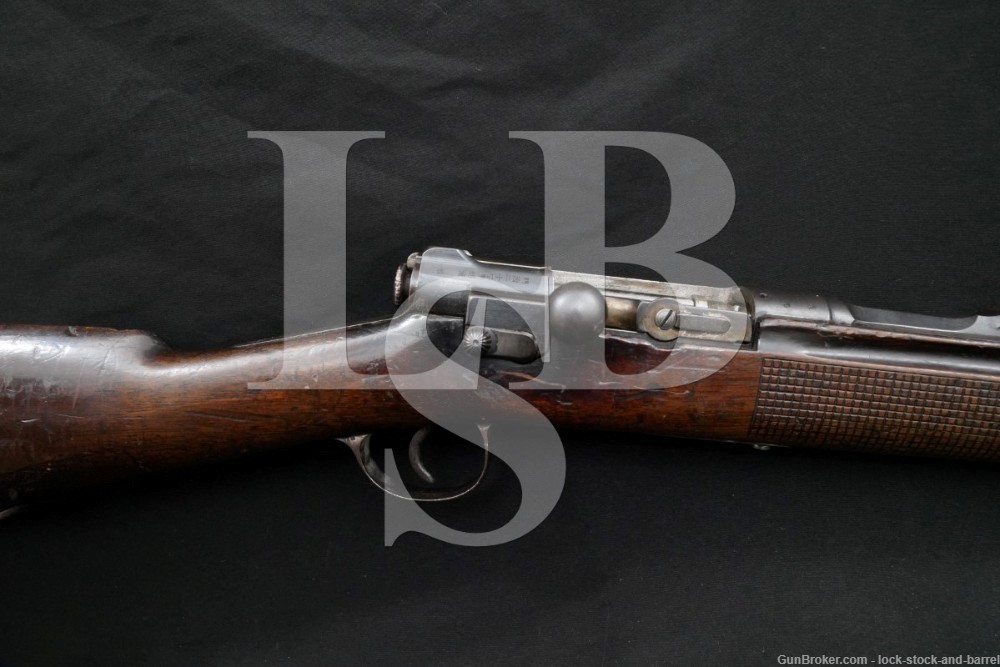 Markings: The top of the barrel shank has had its “chrysanthemum” (the Imperial ownership seal) defaced. The left side of the barrel shank is marked with the serial number. The bolt assembly and bayonet lug are marked with numbers that do not correlate to the serial number. Both sides of the receiver are marked with small Japanese characters. The characters on the right rear translate to “Meiji 22 Year Adopted”. The left side of the butt is marked “153” in paint. For more information on the markings see pages 198 – 202 of Joe Puleo’s book, Bolt Action Military Rifles of the World.

Stock Configuration & Condition: The hardwood stock has a straight grip, checkering, nosecap with bayonet lug, barrel band, 2 sling loops, and a metal buttplate with sliding metal door for storage in the butt. The sliding door is stuck and it will not slide up. We did not try to force it. The buttplate & stock hardware show scrapes and discoloration from oxidation. The buttpalte also shows surface erosion. The wood shows numerous scrapes, scratches, and compression marks. Several have damaged or removed small areas of the surface wood. Most of these marks have been oiled over. The LOP measures 13 inches from the front of the trigger to the back of the buttplate. The stock rates in about Very Good overall condition as an antique.

Finish Originality: Original. The barrel and receiver have been treated with cold blue.

Bore Condition: The muzzle and grooves are light grey. The rifling is deep. There is erosion in the grooves and at the muzzle.

Overall Condition: This rifle retains about 25% of its current metal finish. The barrel and receiver have been treated with cold blue. Surface erosion is bleeding through the cold blue. The metal shows scrapes, scratches, discoloration from oxidation, and surface erosion. The screw heads show heavy use and oxidation. The markings are defined. Overall, this rifle rates in about Good to Very Good condition as an antique.

Mechanics: This rifle was made without a safety. The action functions correctly. We have not fired this rifle. As with all previously owned firearms, a thorough cleaning may be necessary to meet your maintenance standards.
The magazine cutoff functions and the magazine follower is still under light tension.

Our Assessment: The Type 22 Murata Infantry Rifle was adopted in 1889. The 22 referred to the adoption date, the year 22 in the Meiji period according to the Japanese calendar. It was Japan’s first repeating military  rifle. This antique Murata Rifle has seen some use but is well over 120 years old. Unfortunately the chrysanthemum on the barrel shank has been defaced. There are lots of other Japanese markings on the rifle that this Murata quite collectible. Good luck.