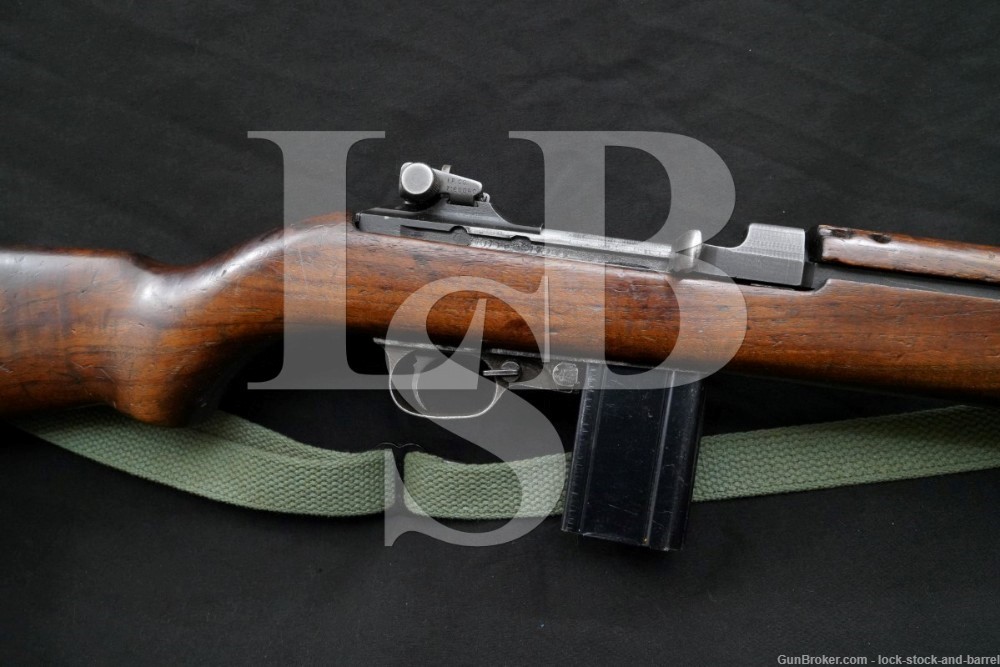 Make: Underwood Corporation. The receiver was subcontracted by the Singer Manufacturing Company.

Model: M1 Carbine
After WWII this M1 Carbine appears to have been provided to the Austrian Gendarmerie (Police). See www.bavarianm1carbines.com/Austria.html for more info.

Stock Configuration & Condition: The two piece hardwood stock has a pistol grip, modified Type III (now resembles a Type II) barrel band with sling loop, sling well, sling pass through, and metal buttplate. The refinished buttplate shows scratches, thinning, and small edge dents. The wood shows numerous scrapes, scratches, and compression marks. Several of the marks have damaged small portions of the surface wood. The most prominent marks are on the bottom of the forearm. The LOP measures 13 ? inches from the front of the trigger to the back of the buttplate. The stock rates in about Very Good overall condition.

Bore Condition: The muzzle and grooves are light grey. There is fouling and intermittent erosion at the muzzle and in the grooves. The fouling should clean up some. The bore shows an M.E. of 1.3.

Overall Condition: This rifle retains about 90% of its metal finish. The metal shows scrapes, small scratches, and areas of light discoloration. The trigger group shows thinning on the leading edges of the metal. The left side of the receiver shows light thinning at the wood line. The right side of the receiver shows some thinning consistent with cycling. The recoil plate screw shows heavy use. The markings are deep. Overall, this rifle rates in about Very Good condition.

Box, Paperwork & Accessories: The rifle comes with canvas sling. It shows light discoloration. Overall it is in about Fine condition. The rifle comes with a 15 round magazine. It shows scrapes, small scratches and a few small spots of discoloration. It is in about Very Good Plus condition.
The 15 round magazine is not available to residents of California or any state with magazine capacity restrictions.

Our Assessment: This Underwood M1 Carbine was made back in 1944. The receiver is a rare “B” marked receiver that was subcontracted by the Singer Manufacturing Company. After WWII the rifle appears to have served in Austra for the Gendarmerie (Austrian Police). The bottom of the trigger guard is stamped with Austrian markings. This Underwood M1 Carbine has nice markings that tell a story. It can fill several slots in your M1 Carbine collection. Good luck.