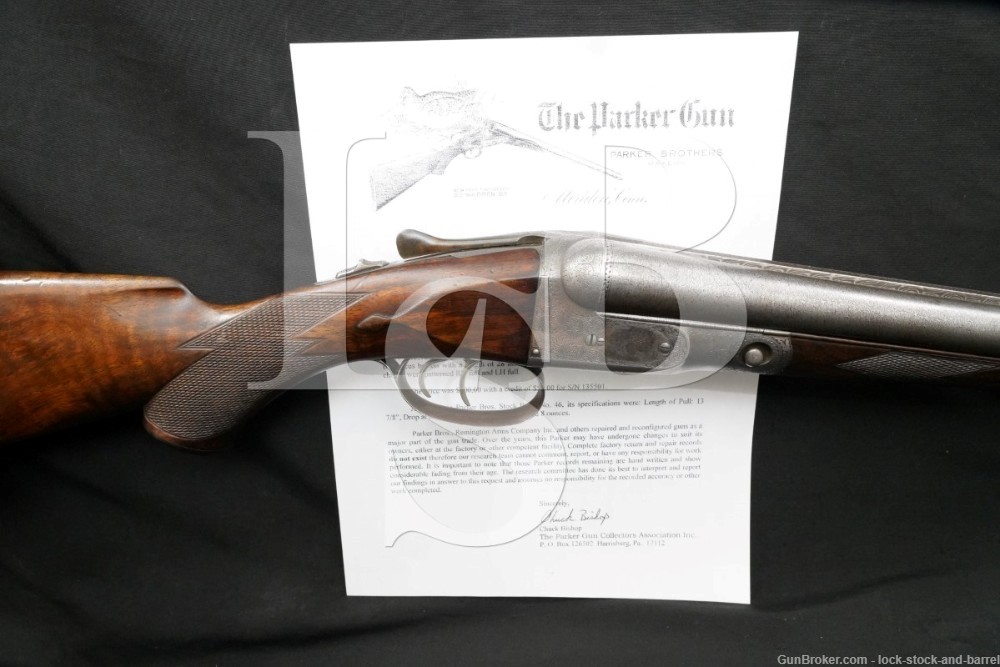 Choke: Both Improved Cylinder, both fixed.

Sights / Optics: There is a silver colored bead mounted to the front of the rib behind a scribed line. The top of the rib has fine serrations for glare reduction which stop at the scribed line.

Stock Configuration & Condition: The stocks are a two piece checkered walnut set with splinter forend, capped pistol grip, engraved skeleton steel buttplate with checkered butt, and inlaid silver initial-plate in the belly (not marked). The stocks have scattered nicks, scuffs and scratches. There is thinning finish and discoloration toward the rear of the buttstock and some discoloration at the left-rear of the forend. The checkering has light handling wear but is well defined. There are no chips or cracks. Drop at comb is 1 5/8”, drop at heel is 2 5/8?, the cast is about neutral. The LOP measures 13 7/8? from the front of the front trigger and 13 1/8? from the front of the rear trigger to the back of the buttplate. The plate has worn to white with scattered minor oxidation and a small dent at the toe. The stocks rate in Very Good overall condition.

Bore Condition: The bores are mostly bright. There is some scattered light erosion in the bore. The bores appear to have had some dents pressed out.

The consignor provided minimum barrel wall thickness measurements. We have not measured the wall thickness and these figures should be confirmed prior to firing: Left- 0.030″, Right- 0.030″

Overall Condition: This shotgun retains about 75% of its metal finish. The finish is thinning at all edges. The barrels have generally strong damascus patterning with some handling wear on the sides toward the rear, more on the left than the right. The receiver has case color on the water table, toward the rear around and below the fences, under the lever and around the triggers. Other areas have mostly muted or worn to white. There is some scattered minor oxidation and infrequent spots of minor erosion. The action shows operational wear. The screw heads range from sharp to lightly tool marked with strong slots. The markings are clear. Overall, this shotgun is in Very Good condition.

Mechanics: The action functions correctly. The tang mounted safety returns to ‘safe’ when the action is opened. The barrels have barely perceptible play to the frame. The lever sits just left of center when the action is closed. We have not fired this shotgun. As with all used firearms, a thorough cleaning may be necessary to meet your maintenance standards.

Box, Paperwork & Accessories: This shotgun comes with a copy of a Parker Gun Collectors Association letter which states that this shotgun was originally ordered by Henry Wood & Marshall Hardware in NY to be sent to Dr. M.P. Burnham on February 20, 1907 and shipped March 1, 1907 as a DH Hammerless 12 gauge with 28″ damascus steel barrels choked Full and Full.

Our Assessment: This Parker Brothers DH Grade Hammerless comes to us from 1904, right at the turn of the century. The DH Grade was the first grade offered by Parker with their new black Titanic steel barrels and many buyers found the DH to be the ideal choice for a higher grade Parker, not thinking the difference in price between the DH, CH, and BH to be commensurate with the increase in price. This 12 Gauge example was ordered with damascus steel barrels and is delightfully light at just six and a half pounds. Built on the 1-size frame, the gun will be perfect for carrying all day and should make for a great pheasant gun. At some point, the bores have been opened up, now choked Improved Cylinder instead of Full, but otherwise matches the specifications noted in the included PGCA letter. The letter does raise one question about the gun, its serial number places it being produced in 1904 but it didn’t ship until 1907. It’s hard to imagine such a beautiful gun sitting un-sold at Parker Bros. for three years! This shotgun would make a great addition to any collection, especially an avid bird hunter or Parker collector. Please see our photos and good luck!