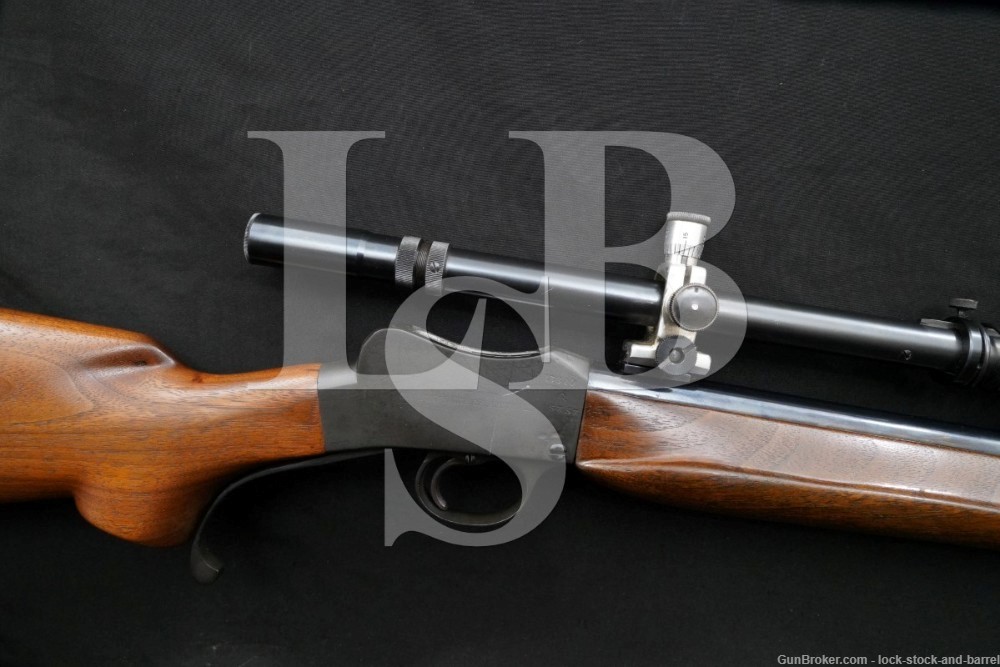 Markings: The left of the receiver is marked “MADE BY THE BIRMINGHAM SMALL ARMS Co Ltd“, “TRADE” with BSA’s stacked rifle logo, “MARKS” and “BSA”, the right is marked “COMMONWEALTH OF AUSTRALIA”, “13810 / Q / 5353, the top of the chamber ring has a kangaroo. The left-rear of the breech-block has a British proof mark. The left of the barrel is marked “218 MASH BEE”, the bottom is marked “S”, “G / W” (possibly Schuetzen Gun Works) and “SH”.

Sights / Optics: The barrel has two mounting blocks installed with rings holding a J. Unertl 14x 25″ scope with crosshair reticle. The scope has threaded lens caps which have kept the glass fairly clear, showing scattered light wear in the body, in about Fine condition.

Stock Configuration & Condition: The stocks are two-piece smooth wood with a semi-beavertail forend, pistol grip, straight comb, cheekpiece, ventilated black rubber Pachmayr White Line recoil pad and sling studs front and rear. The stocks have a few scattered light nicks, scuffs and scratches, most notable in the right of the buttstock. There are no chips or cracks. The LOP measures 14 1/4″ from the front of the trigger to the back of the recoil pad, 13 1/4″ to the back of the wood. The pad has minor wear and is still supple. Overall, the stocks are in Fine-plus condition as not original to the gun.

Finish Originality: The barrel’s finish appears Original, but the barrel is not original to the receiver. The receiver has been Refinished.

Overall Condition: This rifle retains about 97% of its current metal finish. The finish is generally strong throughout with a few light scratches on the right receiver flat and light handling marks. The receiver has scattered light erosion, nicks and tool marks under the finish. There is moderate erosion on the top of the breechblock. The lever appears to have been bent and had an extension welded on before being refinished. The pin head is tool marked, but not peened. The screw heads are tool marked with strong slots. The markings range from clear to worn and incomplete. Overall, this rifle is in Very Good condition as customized.

Our Assessment: This is a Martini Cadet rifle built by BSA and sold to the Commonwealth of Australia. BSA and Greener made these rifles for use by the Australian military cadets starting in the late 1890’s with the majority made in the early 1900s to supply Australia’s mandated marksmanship training program. After WWII, many were converted to sporting or target rifles by gunmakers like Sportco, and the original Cadets as well as their Sportco conversions were imported into the United States starting in the late 1950’s. This example has been through a conversion with new stocks and a new barrel chambered for .218 Mashburn Bee installed. Based on the .218 Bee, A.E. Mashburn developed a wildcat which essentially moved the shoulder of the case forward and steepened the shoulder angle, allowing for greater case capacity. With lighter projectiles, it allowed the cartridge to reach velocities in excess of 3,000 fps, making for a nice varmint or target round. Paired up with a great 14x Unertl scope, it’ll be a nice little shooter made on a receiver built in England and sold to Australia about a century ago. Please see our photos and good luck!