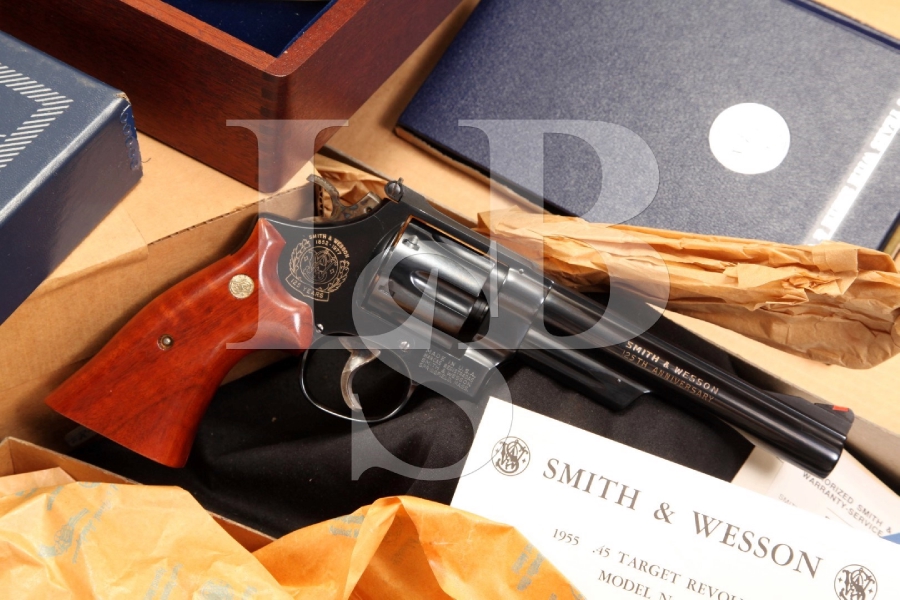 Make: Smith & Wesson
Model: Model 25-3, the 1955 Model .45 Target Heavy Barrel
Serial Number: S&W7881
Year of Manufacture: 1977
Caliber: .45 Colt
Action Type: Single and Double Action Revolver with Swing-Out Cylinder
Markings: The left side of the barrel is marked in gold, “.45 CALIBER”. The yoke cut is marked “S&W 7881 / MOD. 25-3”. The yoke is marked “X241X / G16”. The ejector rod cut is marked “CC397”. The left side of the grip frame is marked “A1 / G16 / X241X” followed by “F5 / D” in a circle. The right side of the barrel is marked in gold, “SMITH & WESSON / 125TH ANNIVERSARY”. The right side of the frame is marked with the four line Marcas Registradas address. The right sideplate is marked “SMITH & WESSON / 1852-1977 / 125 YEARS” with the S&W trademark in the middle surrounded by olive branches. The right side of the grip frame is marked with a “W” In a circle and an “L” in a triangle.
Barrel Length: 6 ½”
Sights / Optics: The front sight is a red insert serrated ramped blade. The rear sight is a white outline S&W micrometer click square notch adjustable foe windage and elevation.
Stock Configuration & Condition: The grips are smooth oversize target grips with brass S&W medallions. There are only faint handling marks on the grips. The grips rate in about Excellent overall condition.
Type of Finish: Blue
Finish Originality: All Original
Bore Condition: The bore is Bright and the rifling is Sharp. There is a spot of light frosting in the bore.
Overall Condition: This handgun retains about 98% of its metal finish. There is a faint dragline on the cylinder. The screw heads are mostly sharp. The grip screw is lightly distressed along with the side plate screw above the rear of the trigger guard. The markings are clear. Overall, this handgun rates in about Excellent condition.
Mechanics: The action functions correctly in both single and double action. We did not fire this handgun.
Box, Paperwork & Accessories: This pistol comes in an original blue two piece cardboard Smith & Wesson box with blue metal corner reinforcements which reads “125th Anniversary” on the lid. Inside this box is another small two piece cardboard box that contains a metal coin with Horace Smith’s and Daniel Wesson’s portraits on it. On the other side, the coin reads “Smith & Wesson 1852-1977 / 125 years” with the S&W logo in the middle surrounded by olive branches. The rim of the coin reads “MEDALLIC ART CO. CANBURY, CT”. The original owner’s manual and various informational pamphlets are included in the box along with the original S&W wrapping paper. This blue box rates in about Fine Condition showing only light storage wear. This box is housed within a larger box which also contains the “125 YEARS WITH SMITH & WESSON” book by Roy G. Jinks, which rates in LNIB condition. The large outer box has the matching end label which was usually placed on the smaller blue box. An additional box is included which contains a rosewood colored wooden case with blue velvet interior and cutouts for the book with leather straps and cut outs for the medallion and the revolver. The wooden case is near mint and rates in Excellent condition. The brass placard has not been applied and reads “SMITH & WESSON / 125TH ANNIVERSARY COMMEMORATIVE / 1852-1977”. There is room to have your name engraved if you desire. This placard has a sticky side so it can be easily fixed into the recessed portion of the case lid.
Our Assessment: This 125th year Anniversary revolver is a beautiful N frame chambered in .45 Colt. It is rare to find any Smith & Wesson revolver up to this time period (1970s) in the .45 Colt caliber. This was because of a “gentleman’s agreement” that Colt would produce few guns in .44 S&W Special if Smith & Wesson would produce few in .45 Colt. Since it was a rare caliber, Smith & Wesson chose it for their 125th year Anniversary Revolver. It would be a fine addition for a collector. It can only increase in value since its production in 1977. The entire package is as shipped from Smith & Wesson with all original packing materials. This is a complete 125th Anniversary package.