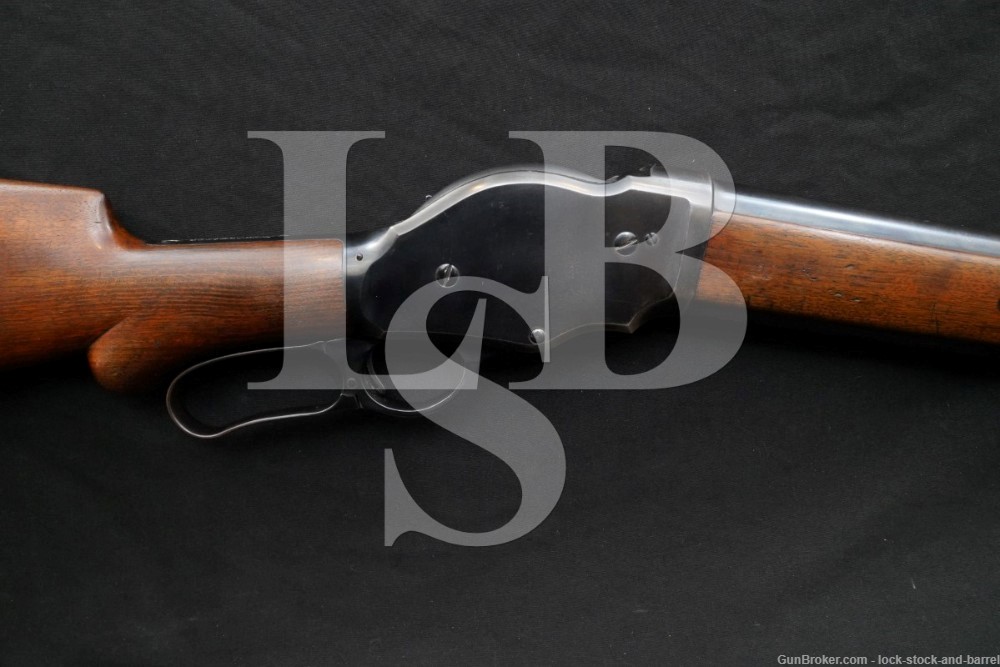 Sights / Optics: The shotgun is mounted with a brass bead front sight. The top of the receiver’s chamber ring has a groove for a sighting plane.

Stock Configuration & Condition: The stocks are smooth walnut with a pistol grip, serrated black hard rubber butt plate and a two piece forearm. The stocks have some scattered nicks, dings, scuffs and scratches. The most notable marks are on the left forend panel. There is some wear around the rear edge of the buttstock, appearing as though the plate was fitted to the wood while installed. There are no chips or cracks. The LOP measures 12 3/4” from the front of the trigger to the rear of the butt plate. The plate is not original to the gun, showing shaping wear around the edges and scattered light wear in the face with well defined serrations. The stocks rate in about Very Good overall condition as possibly refinished.

Bore Condition: The bore is semi-bright. There is some scattered light erosion, there is also some scattered stubborn fouling which should come out with a patient cleaning.

Overall Condition: This shotgun retains about 87% of its current metal finish. The balance is mostly in handling wear on the bottom-front of the receiver and the bottom-rear of the magazine tube. The worn areas show discoloration from oxidation. There is a defined patch of finish loss on the bottom-right of the barrel near the muzzle, appearing to have been oxidation which was scrubbed out. There are some other scattered light nicks, scuffs and scratches, most notable on the chamber ring. There is some minor erosion under the finish, mostly on the right receiver flat. The action shows operational wear. The screw heads range from sharp to tool marked with useable slots. The markings are clear with soft edges. Overall, this shotgun is in Very Good condition as refinished.

Our Assessment: The Winchester Model 1901 was an improved version of the Model 1887 made only in 10 gauge. The action of the 1887 was not considered strong enough for smokeless powders, leading to the production of the 1901. Additionally, a  two piece finger lever with a trigger block to prevent accidental discharge was added. In its day, it was largely considered a “goose” gun and popular with some of the commercial hunters. Today it is more of a curiosity, and an uncommon one at that. Only about 13,500 were manufactured before Winchester discontinued the lever action in favor of the slide or pump action repeating shotguns. It was designed to shoot 2 7/8” 10 gauge smokeless shells. This example has been refinished, so it looks great. Its markings are still clear and the mechanics are strong. Please see our photos and good luck!