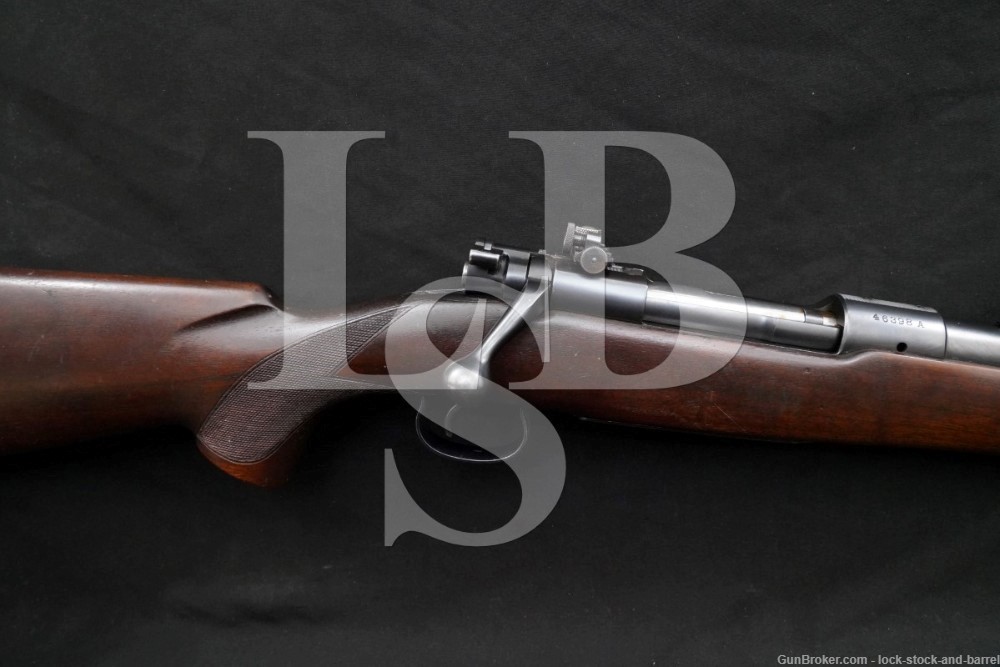 Sights/Optics: The front sight is a beaded brass blade with a protective hood pinned in a slotted ramped base fixed to the front of the barrel. There is a boss at the rear of the barrel with a dovetailed elevator tang sight. The top of the receiver is drilled and tapped with a pair of holes in the chamber ring and a single hole in the bridge. Mounted to the left side of the receiver is a factory installed Lyman peep sight.

Stock Configuration and Condition: The stock is a one-piece checkered walnut with fluted straight comb, checkered steel buttplate, and sling swivels front and rear. The stock has been relieved on the left for the installed receiver sight. There are scattered minor marks including light nicks and compression, all of which are most notable on the buttstock. The LOP measures 14” from the front of the trigger to the back of the plate. The plate has light thinning at the heel and light nicks throughout. Overall, the stock is in Good-plus condition as refinished and modified.

Bore Condition: The bore is semi-bright and the rifling is well defined. There is no erosion, but minor stubborn fouling persists throughout.

Overall Condition: This rifle retains about 96% of its metal finish. The barrel has just a few minor nicks and scuffs scattered about on the underside mainly nearest to the muzzle. The receiver has minor thinning on some edges, and a bit of minor pitting from surface oxidation where it meets the wood. The screw heads are sharp. The markings are clear. Overall, this rifle is in Fine condition.

Mechanics: The action functions correctly. The rifle has a three-position safety similar to the M1903: all the way to the left locks the bolt and disables the trigger; straight up disables the trigger but the bolt is free to move; to the right enables the rifle to be fired. The scope is mounted high enough to provide clearance for the safety. We did not fire this rifle. As with all used firearms, thorough cleaning may be necessary to meet your maintenance requirements.

Box, Paperwork, and Accessories: This rifle comes with the installed Lyman peep sight as described.

Our Assessment: Winchester’s Model 54 rifle was made from 1925-1936, with a carbine offered in 1927 and an improved version offered in 1930 which had a chrome-moly barrel instead of the earlier nickel-steel. The rifle was Winchester’s only bolt action centerfire rifle at the time, and ceased production when the legendary Model 70 became available in 1937. This example was made in 1936, with a 24” barrel chambered in the classic .30-06 cartridge. This is one of, if not the most popular deer hunting cartridge in America, and is usually readily available in a variety of loads. This rifle shows relatively little wear considering its age and likely use in the field. Please see our photos and good luck!